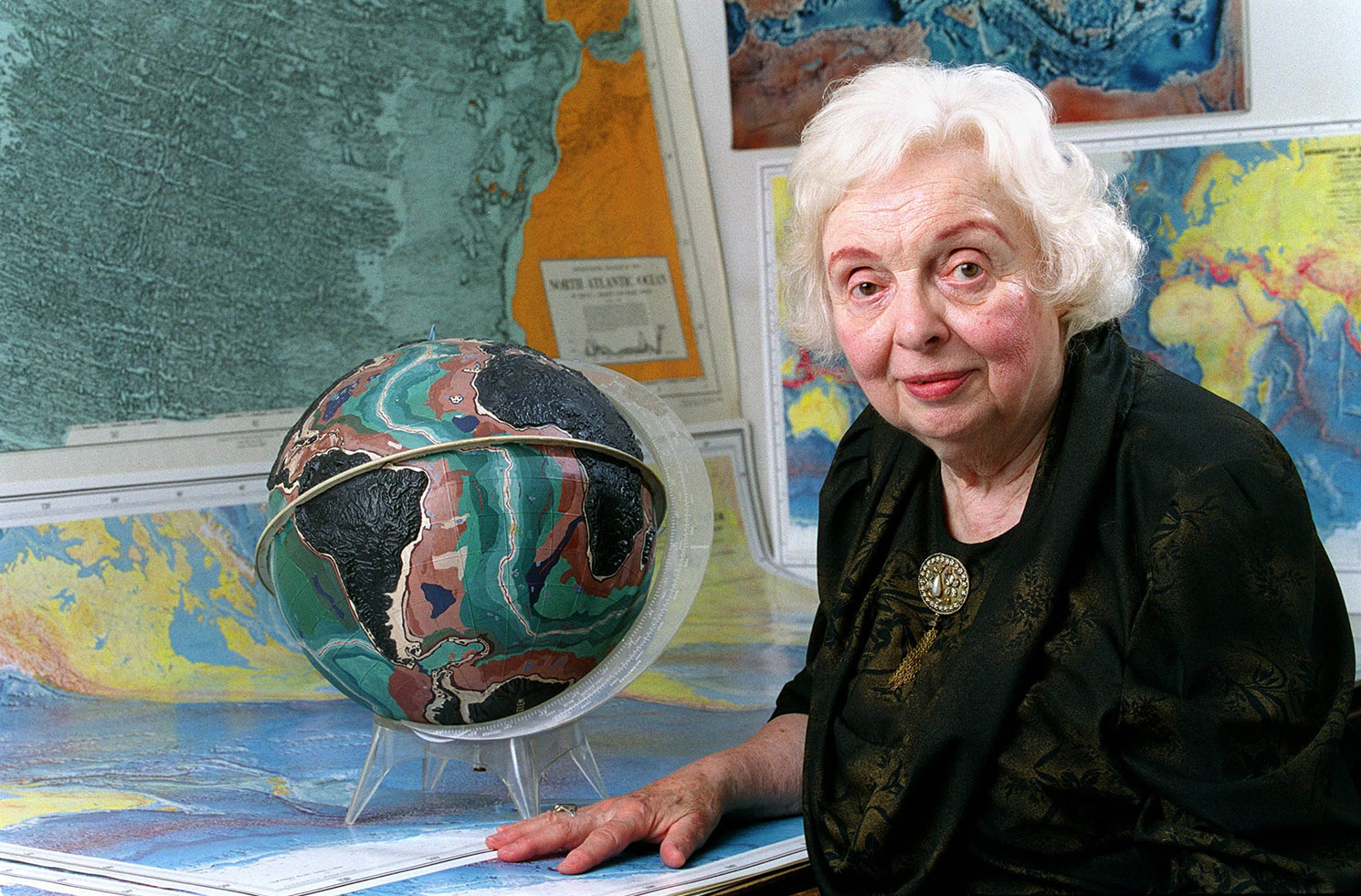 Marie Tharp was a pioneering American geologist and oceanographic cartographer who helped create the first scientific map of the Atlantic Ocean floor. Her revolutionary work revealed the detailed topography and multi-dimensional geographic landscape of the ocean bottom and revealed the presence of a continuous rift valley along the axis of the Mid-Atlantic Ridge, a shift in thinking that led to the acceptance of the theories of plate tectonics and continental drift.

She was born in 1920, and spent her youth accompanying her father, a soil surveyor for the U.S. Department of Agriculture, giving her an early introduction to mapmaking. But young Tharp had no interest in pursuing a similar career as this was understood to be “men’s work.” She graduated from Ohio University in 1943 with a degree in English and music. The military recruitment of young men in WWII gave women an opportunity to explore professions typically reserved for men, and having taken a geology class in college, she was recruited to the University of Michigan’s petroleum geology program. She completed her master’s degree, and then a second masters in math from the University of Tulsa. She took a job at an oil company in Tulsa but found it unsatisfying as she was confined to an office where she collected maps and data for the men going into the field. She moved to New York City and found drafting work as one of the first woman at the Lamont Geological Observatory, now the Lamont-Doherty Earth Observatory at Columbia University. It was here she met Bruce Heezen and would eventually work exclusively with him plotting the ocean floor. 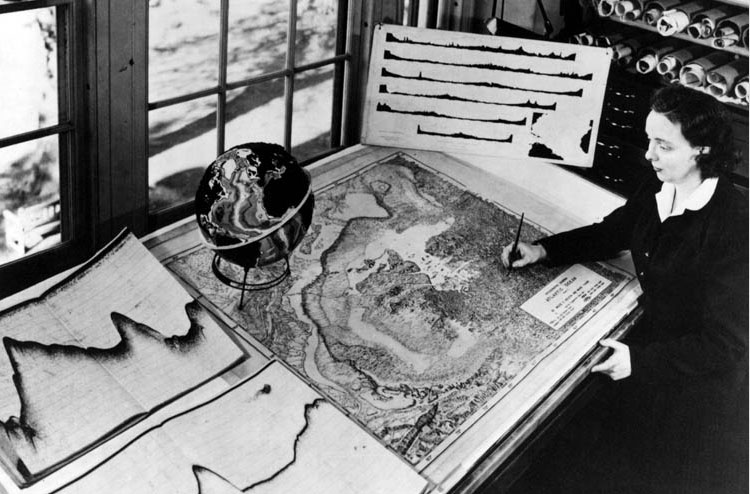 Marie Tharp at her drafting table in Lamont Hall circa 1961. (Credit: Lamont-Doherty Earth Observatory and the estate of Marie Tharp)

For the first two decades of their collaboration, Heezen collected data aboard research ships, while Tharp drew maps from that data, since women were still excluded from working aboard ships at that time. Working with pens, ink and rulers, Tharp drew the underwater details, longitude degree by latitude degree, described by thousands of sonar readings taken by researchers, and independently used data collection from the Woods Hole Oceanographic Institution’s R/V Atlantis. She painstakingly aligned sounding profiles from Atlantis and other vessels, creating a total of approximately six profiles stretching west-to-east across the North Atlantic. Her work represented the first systematic attempt to map the entire ocean floor. She was eventually able to join a data collection research expedition in 1968.

Piecing together maps that they made, she and Heezen revealed a 40,000-mile underwater ridge girdling the globe. With the discovery, they laid the foundation for later work that showed the sea floor spreads from central ridges and that the continents are in motion with respect to one another — a revolutionary and controversial theory among geologists at the time, but crucial to the development of plate tectonic theory. 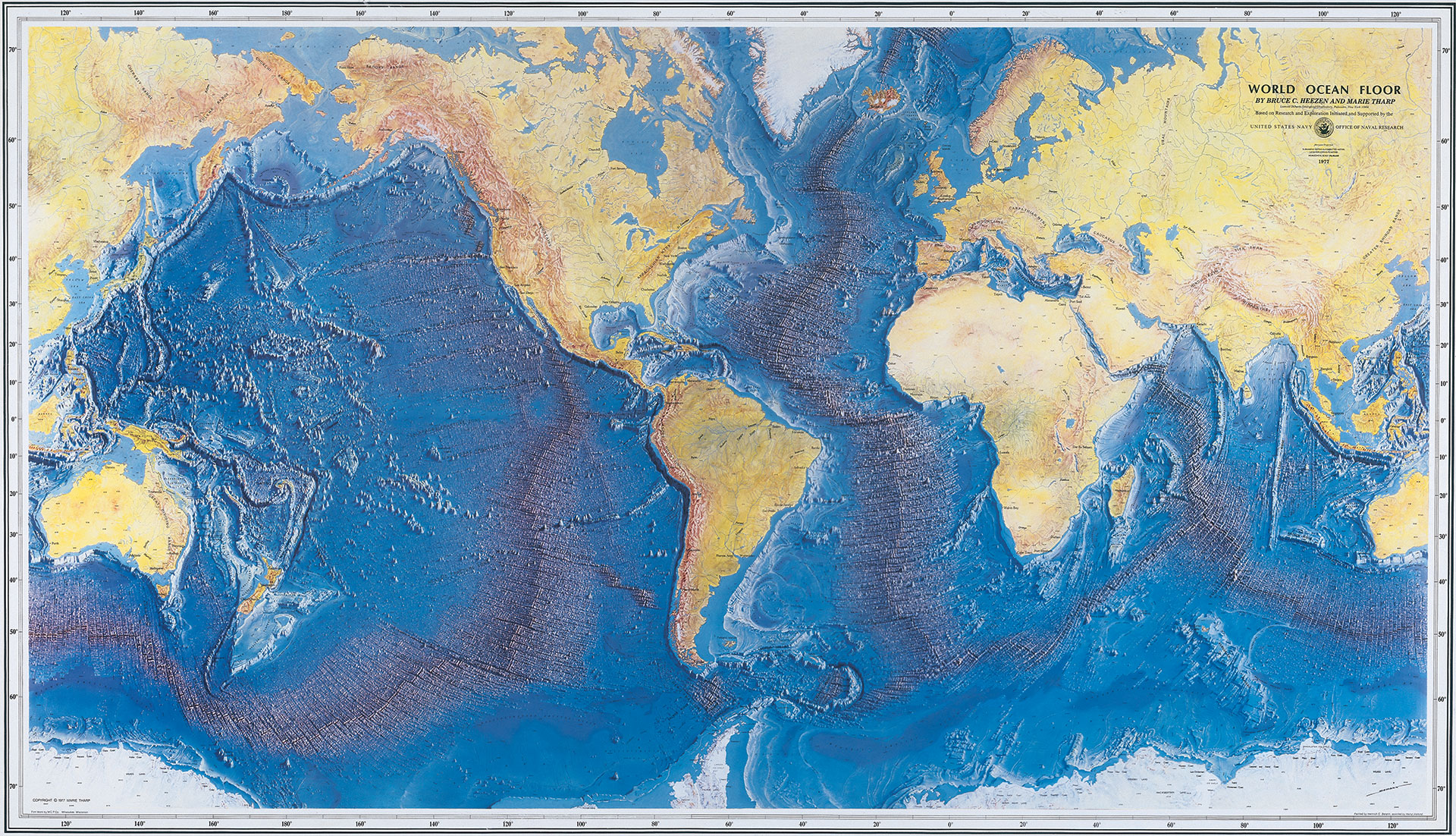 Tharp’s work represented the first systematic attempt to map the entire ocean floor. The World Ocean Floor map was published in 1977 by the Office of Naval Research and is still in wide use today. (Credit: World Ocean Floor Panorama, Bruce C. Heezen and Marie Tharp, 1977. Copyright by Marie Tharp 1977/2003. Reproduced by permission of Marie Tharp Maps LLC and the Lamont-Doherty Earth Observatory)

After Heezen died in 1977, Tharp focused her energy on completing a comprehensive view of the world's oceans. The World Ocean Floor map was published later that year by the Office of Naval Research and is still in wide use today.

In 1978 Tharp and Heezen (posthumously) were awarded the Hubbard Medal, the National Geographic Society’s highest honor, joining the ranks of explorers and discoverers like Ernest Shackleton, Louis and Mary Leaky and Jane Goodall. In 1998, Tharp was honored during the 100th anniversary of the Library of Congress' Geography and Map Division. The following year, she was recognized by Woods Hole Oceanographic Institution with the Mary Sears Woman Pioneer in Oceanography Award. In 2001 she was honored by her home institution with the Lamont-Doherty Heritage Award.

Tharp died in 2006 at age 86. Her pioneering work forever changed the way people think about and study the rich topography of the ocean floor.