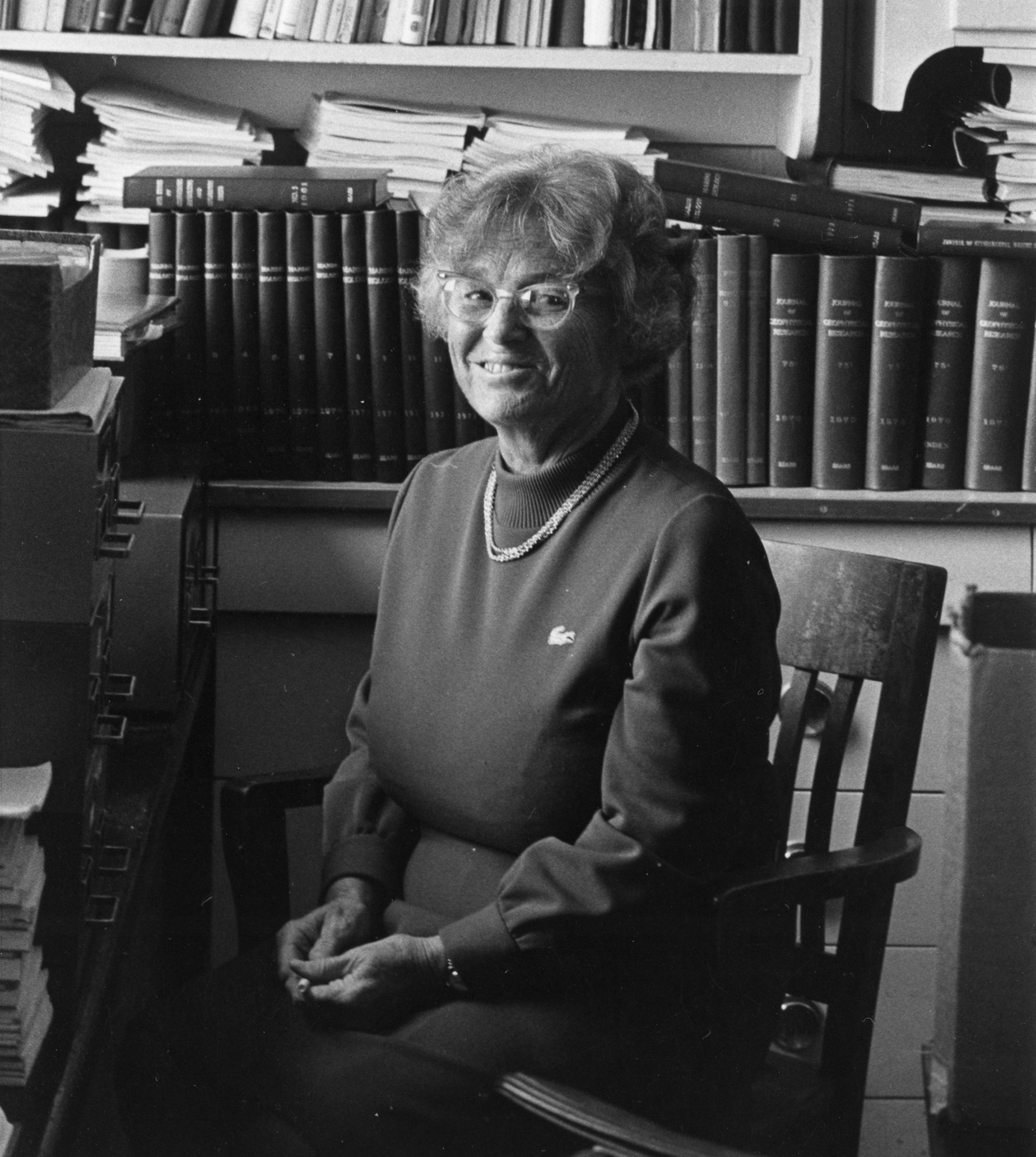 Mary Sears posing for a photo. ( courtesy of WHOI Archives) 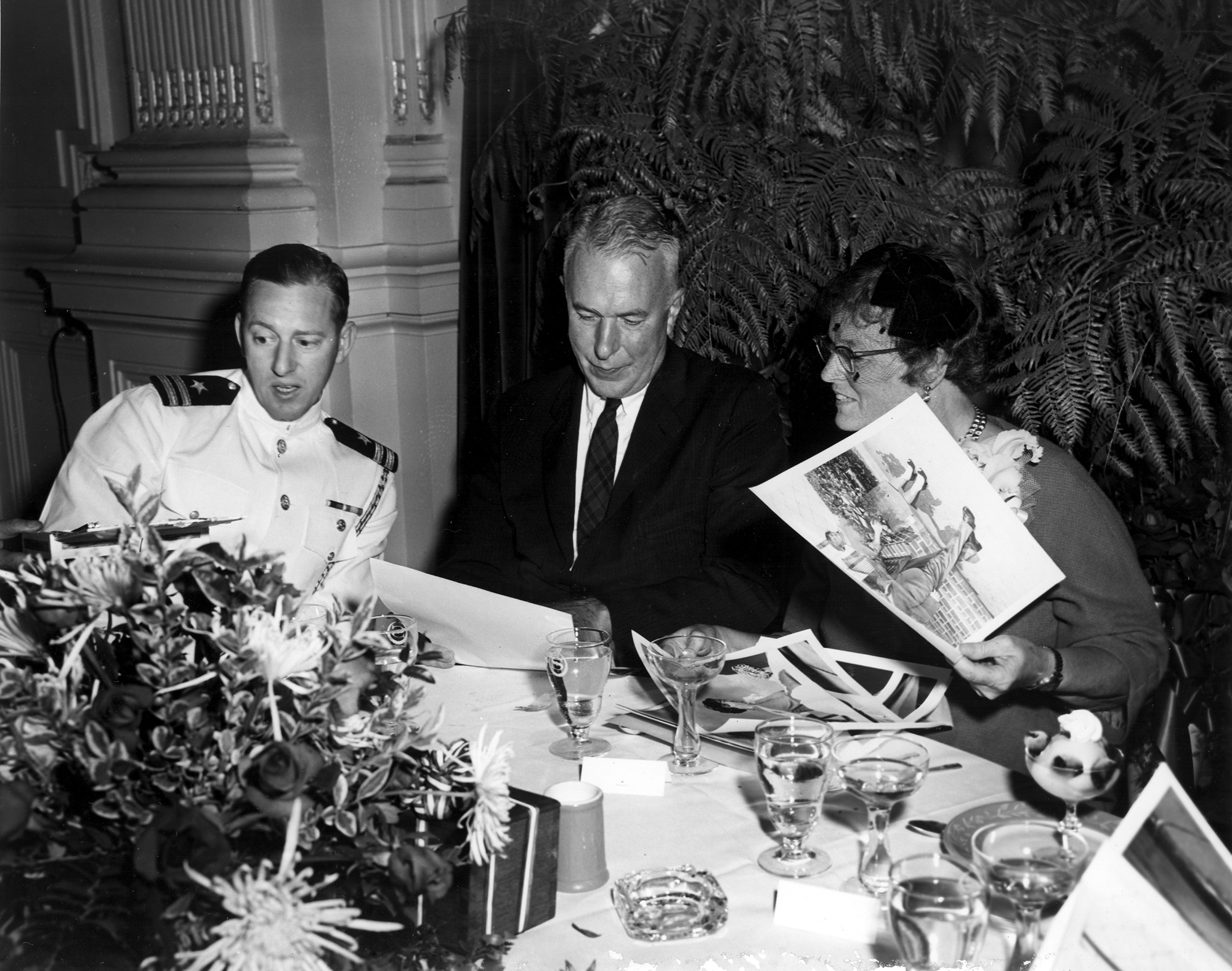 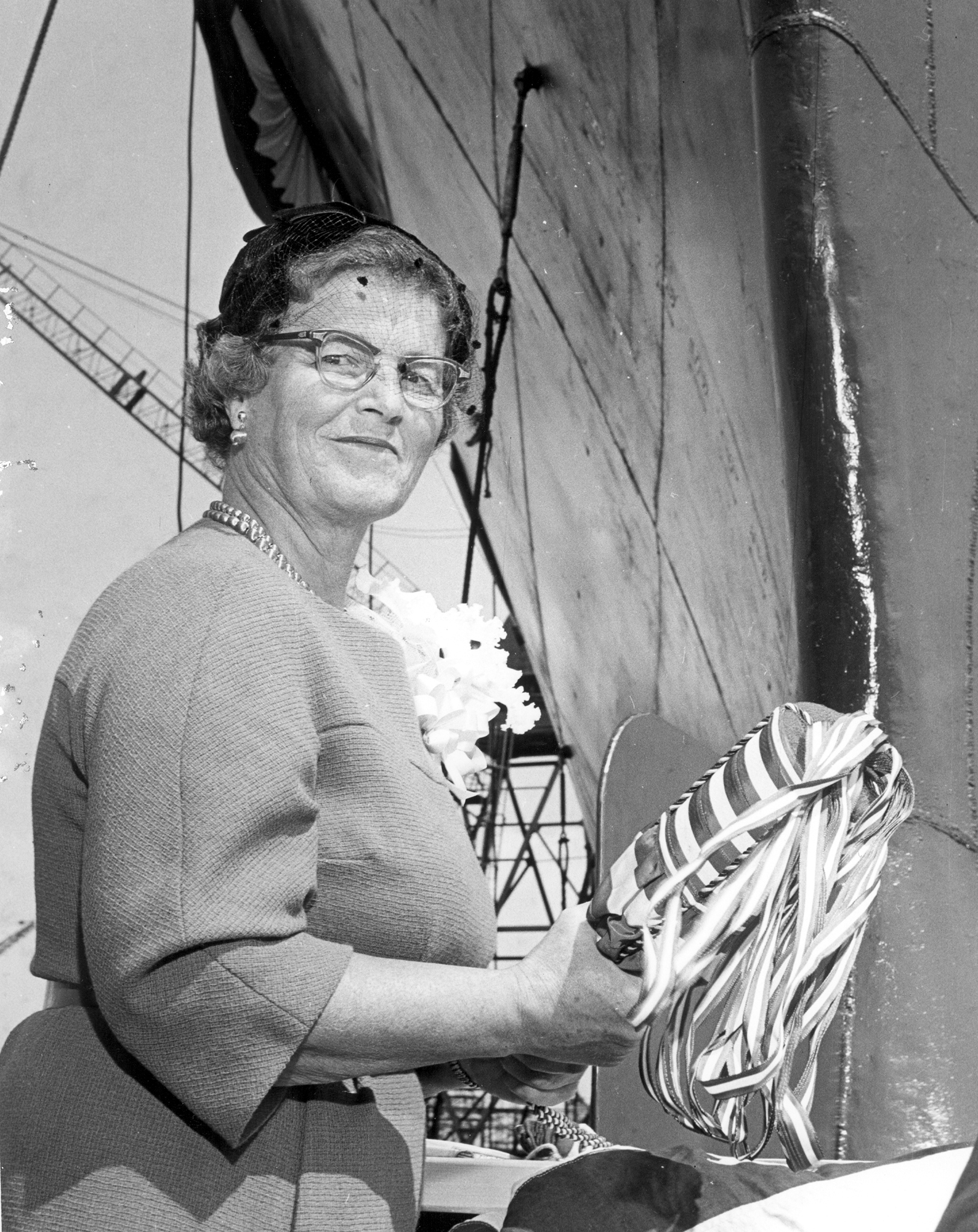 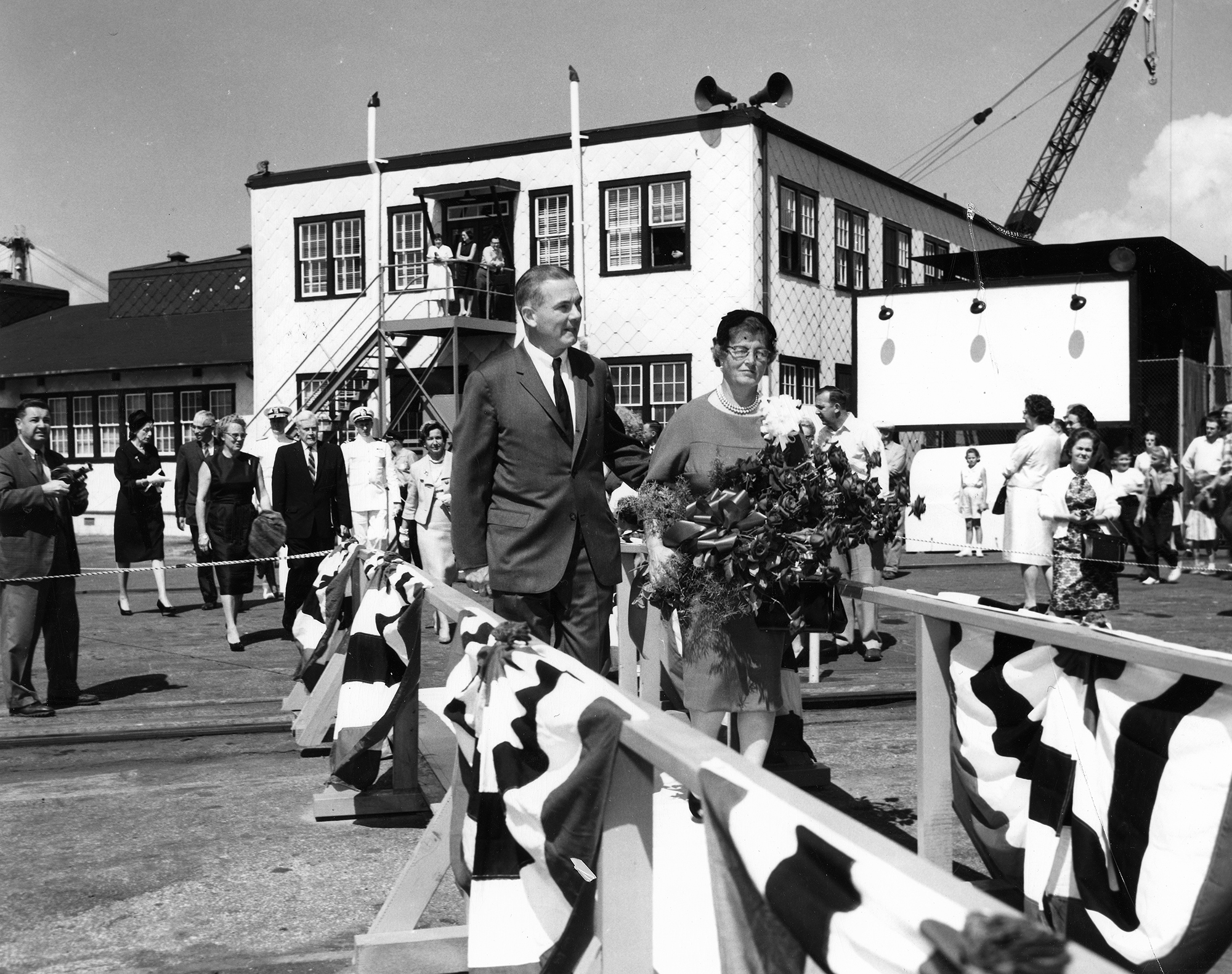 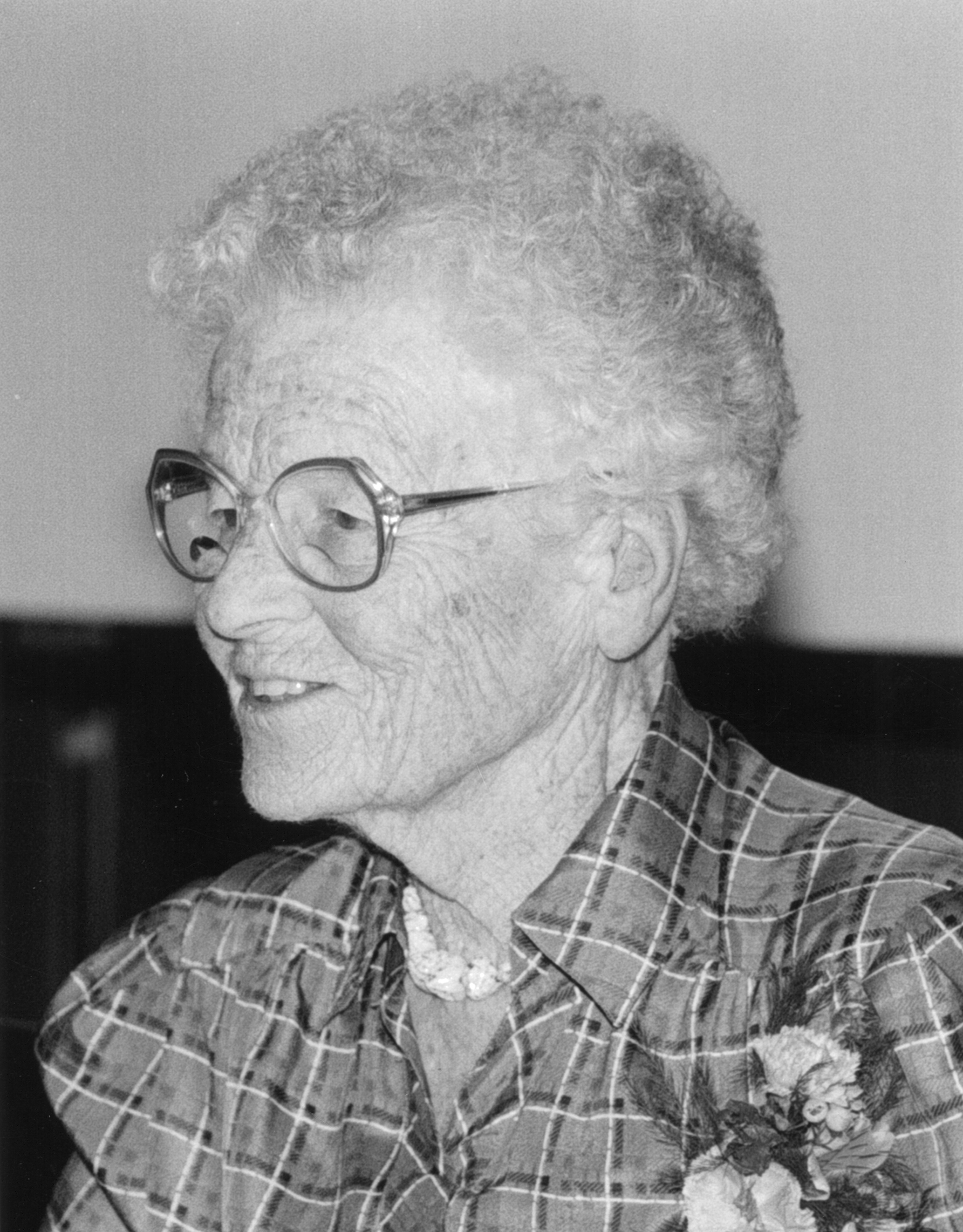 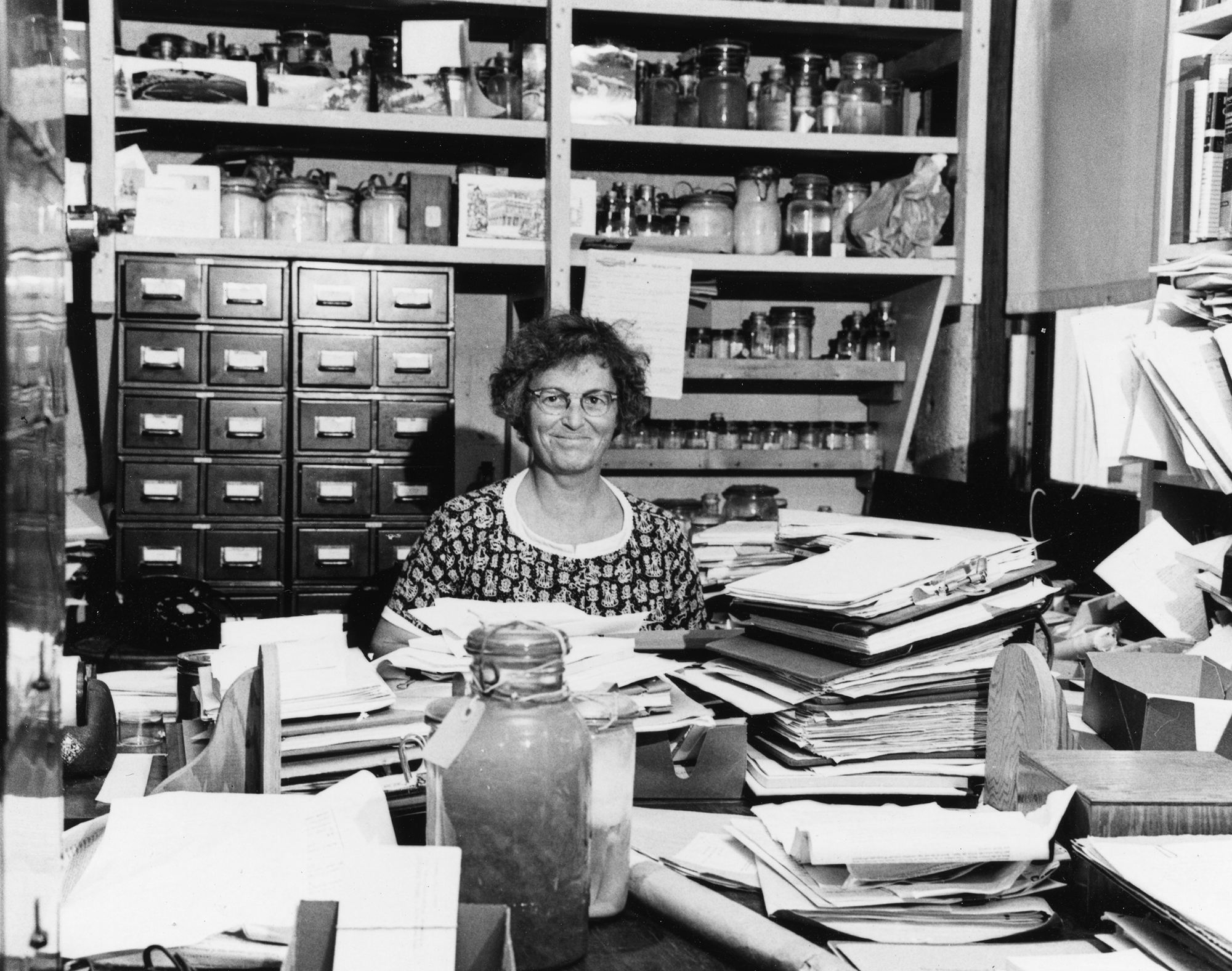 In this 1960 photo, Mary Sears is surrounded by papers and biological samples in her Bigelow Laboratory office. (Photo by Redwood Wright, WHOI) 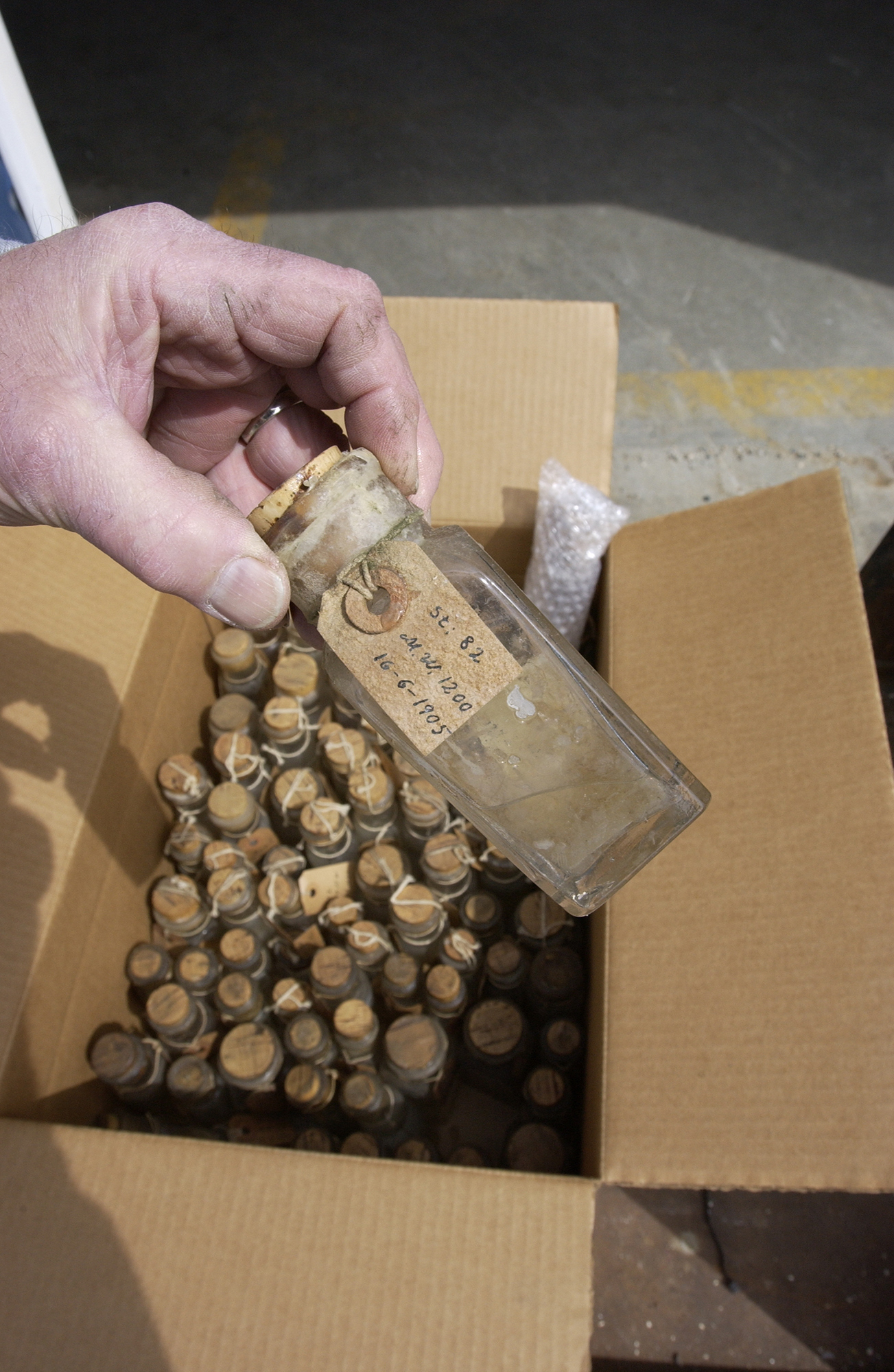 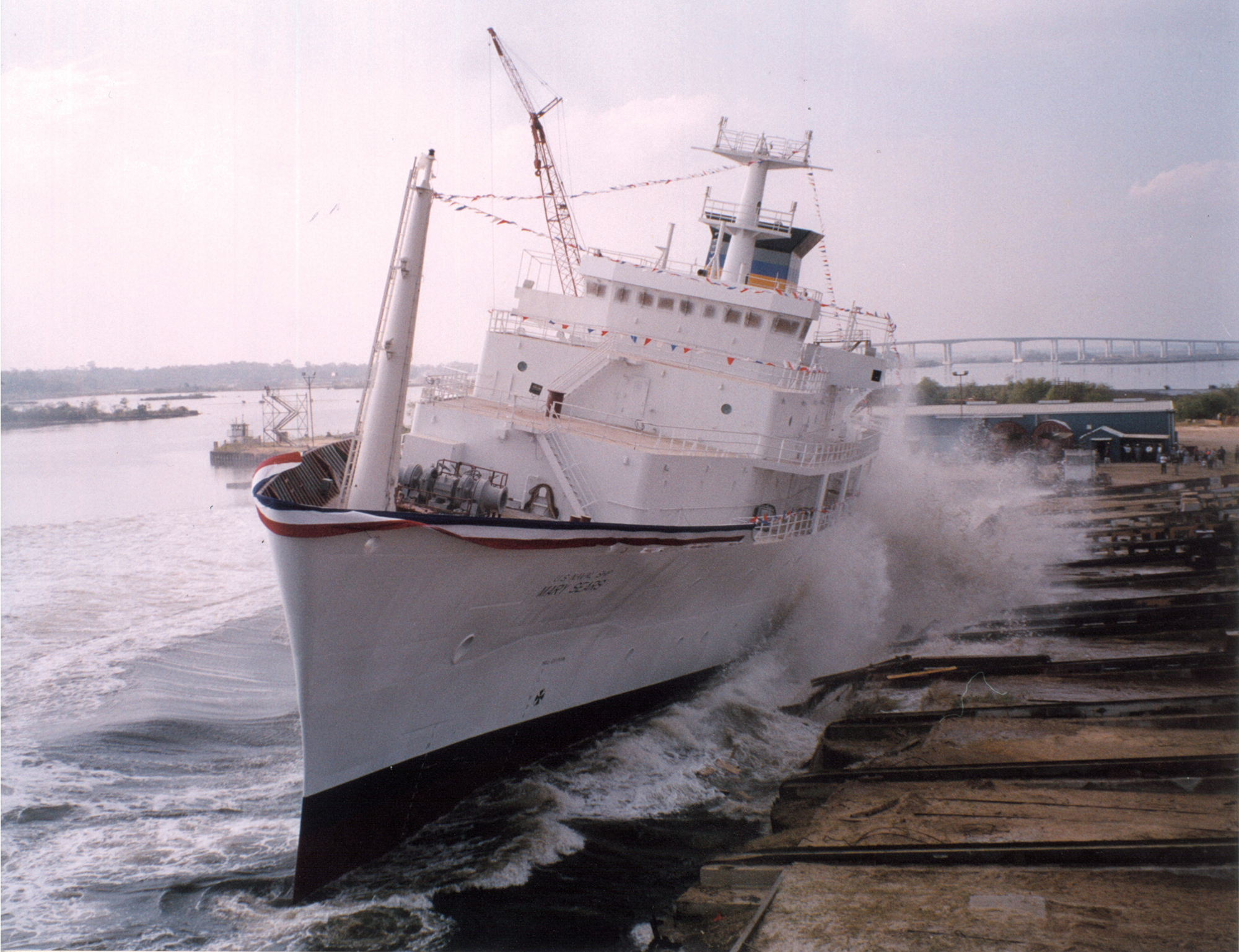 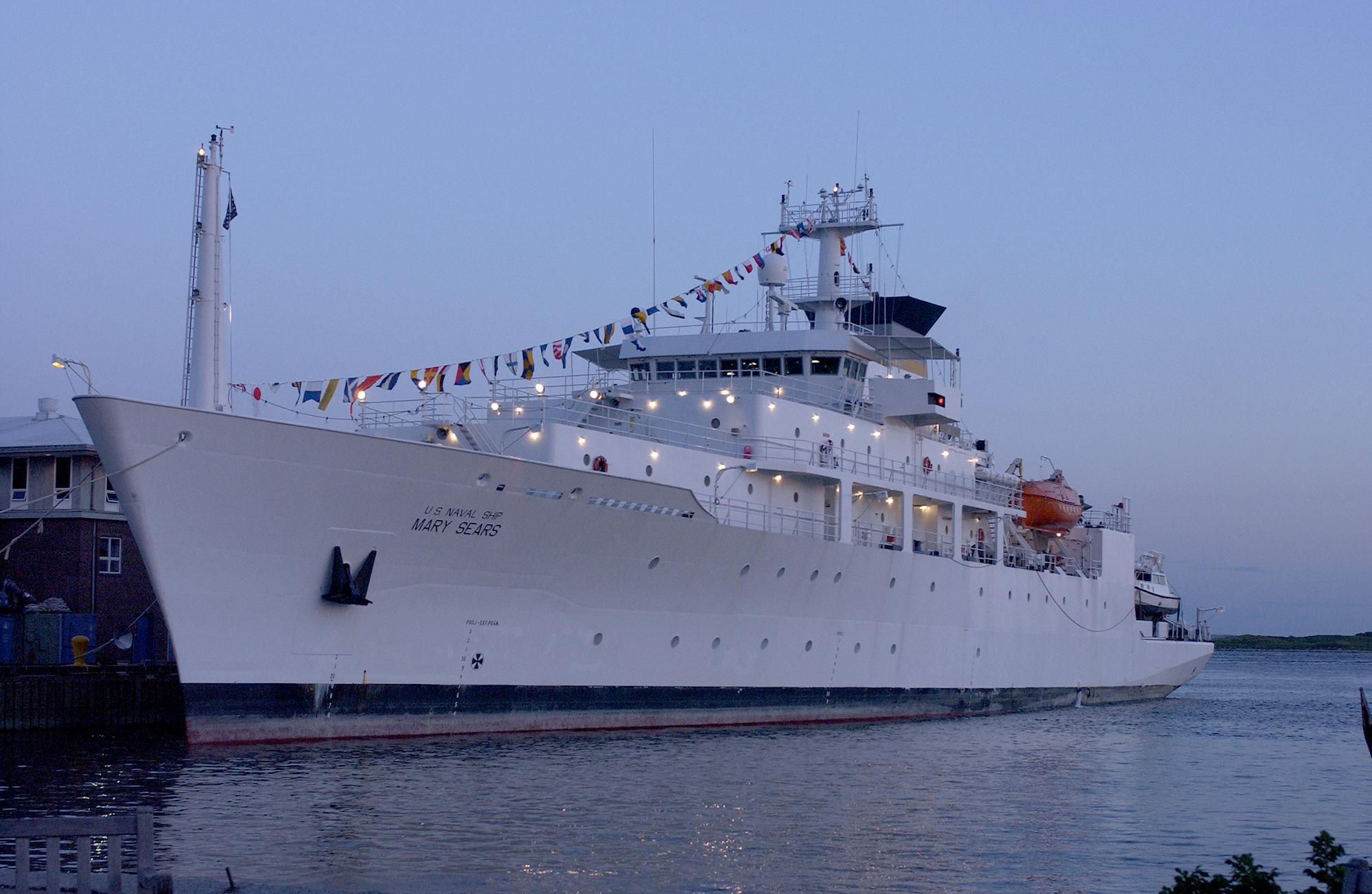 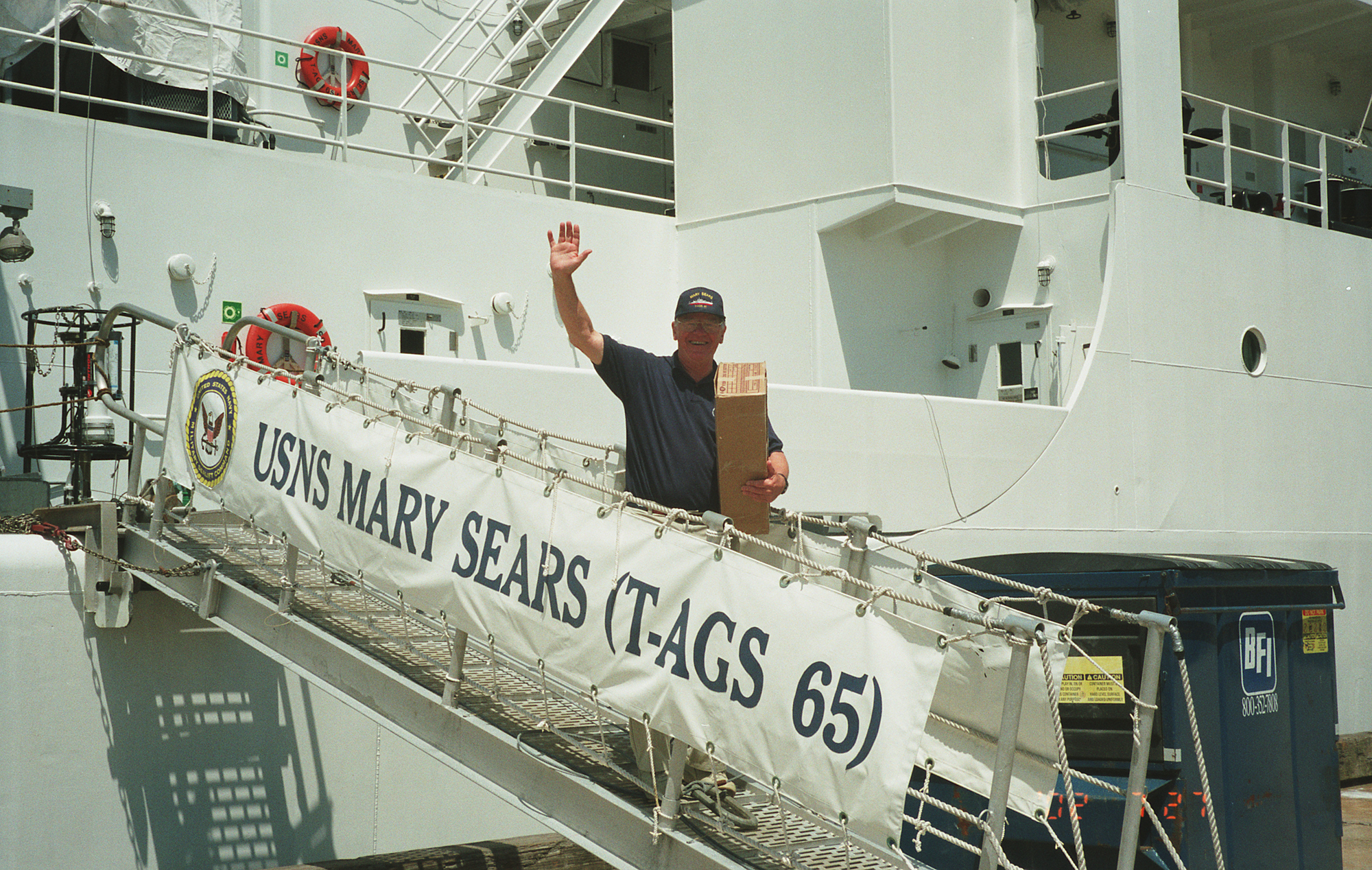 Dick Pittenger on board the USNS Mary Sears when the ship visits WHOI in July 2002. (Photo by Shelley Dawicki, WHOI)

“The Conscience of Oceanography”

Mary Sears was the Oceanographer of the United States Navy—the first in modern times. She also played a central role in the founding and formation of the Woods Hole Oceanographic Institution. Over the course of her career, Sears was an architect of the world community of oceanographers and the founding editor of Progress in Oceanography and the co-founding editor of Deep-Sea Research. She also edited the book Oceanography, which was published by the American Association for the Advancement of Science in 1961. The journals and books she edited are what oceanographic research continues to be evaluated against today.

Sears was born in Wayland, Mass., and grew up exploring the natural world around her, collecting animals—particularly frogs—and setting up terrariums. This passion would forge her life’s path. She graduated from Radcliffe College in 1927, then receiving both her Master’s degree and Doctorate from Radcliffe in quick succession. Her dissertation adviser, Henry Bigelow, was the founder and first director of the Woods Hole Oceanographic Institute (WHOI) and played an important role in mentoring Sears. In particular, he introduced her to leaders in marine sciences of the day and hired her as one of the first ten research assistants at WHOI – the first and only woman of the ten – where she played a leading role by assisting in its founding and later in its purchase of two oceanographic ships. By 1939, she was a junior biologist and by 1940, once WHOI became a year-round organization, a planktonologist . She served as the staff planktonologist until 1963 when she became a Senior Scientist in the Biology Department until her retirement in 1970. In addition, Sears served as a research assistant to Bigelow at Harvard, tutored at Radcliffe, and served as an instructor at Wellesley College throughout the 1930s and 40s. It was her time in Peru, via Wellesley College, that finally allowed her to work onboard research ships with men—something that was considered male-only territory and forbidden to women at the time. She left WHOI briefly for a position that brought her numerous accolades and likely helped change the path of the Second World War in the Pacific Theater.

“We were working so hard for a common cause, I was hardly aware of any barriers.”

In 1943, Sears joined the Women Accepted for Volunteer Emergency Service (WAVES) as a Lieutenant, Junior Grade. Such military service on the home front and overseas, as well as in support of work for the war effort, opened the doors of opportunity for many women around the world. Sears was one of those women. With ships off-limits to women, Sears found herself headed to Washington, D.C., to serve in the U.S. Navy’s Ocean Unit of the Hydrographic Office, which was understaffed, under supplied, and given menial research tasks at the time. Within one year, Sears grew the unit into a division that would eventually become the Naval Oceanographic Office of the Navy Hydrographic Office, where she oversaw more than 400 people—more than on many Naval ships. Under Sears, the unit was charged with aiding the Navy in strategic maneuvers by providing analysis of surf heights, tides, and other pertinent information to provide mission planners and commanders with strategic advantages over the enemy. Her intelligence reports, “Submarine Supplements to the Sailing Directions,” predicted the presence of thermoclines—areas of rapid water temperature change—that allowed submarines to hide and escape surface sonar used by the enemy. Her reports, which often saw her staying up all night to complete her calculations,  provided intelligence for all possible targets for good amphibious landing operations and likely changed the course of the war in the Pacific Theater by helping to diminish the enemy’s prior ability to detect U.S. submarines. In 1946, Sears was awarded the Johannes Schmidt Medal for her contributions to marine science research and Navy oceanography during WWII. The following year, Sears returned full-time to WHOI, while maintaining her position with the U.S. Navy as a reservist. When she retired from the USN Reserves in 1963, she did so with the rank of Commander.

Throughout her life, Sears would receive numerous accolades and awards for her work, whether it be her editing of publications, her work for the Navy, or her work at WHOI. Her other military awards, in addition to the Schmidt Medal, included the American Campaign Medal, Naval Reserve Medal, Armed Forces Reserves Medal, and the World War II Victory Medal. She was also involved in her local community and believed in mentoring and helping those coming up the ranks. She served on the Falmouth, Mass. School Committee from 1952-1973 and was its chairwoman from 1960-69.  She served on the School Committee for the Upper Cape Cod Regional Vocational Technical School District from 1963 to 1965 and, for the Massachusetts Association of School Committees, she served as Area 3 Chairman, Third Vice President, and as a member of the Executive Committee during the 1960s. Further, Sears served on, and was chairwoman of, the committee that operated the Children’s School of Science in Woods Hole. For thirty-five years, she was a Falmouth Town Meeting Member. Education was incredibly important to Sears and every mailbox in her neighborhood that belonged to the house of a child would be periodically filled with books for each young person in the home—a gift from their “Aunt Mary.”

Sears was a member of numerous professional organizations and societies, including the American Association for the Advancement of Science, the American Academy of Arts and Sciences, the Society of Women Geographers, Sigma Xi, the American Association of Limnology and Oceanography, and the American Geophysical Union. She helped establish and was the chair of the First International Congress on Oceanography at the United Nations in 1959 and served on the Joint Committee on Oceanography of the International Council of Scientific Unions from 1958-1960. Sears received an honorary doctorate of science degree from Mount Holyoke College (1962) and Southeastern Massachusetts University (now UMASS Dartmouth, 1974). From Radcliffe College, she received the Alumnae Recognition Award in 1992 and in 1996, she received the Woman of the Year Award from the Falmouth Business and Professional Women’s Organization.

At WHOI, she was a long time member of the Corporation, serving as Clerk of the Corporation from 1947-1973 and Deputy Clerk from 1973-1975, and was named Honorary Trustee and Honorary Member of WHOI in 1976. She retired from WHOI in 1970 and became Scientist Emeritus in 1978. In 1994, Sears was the first recipient of the Women Pioneers in Oceanography Award by WHOI. By 1999, two years after her death, it was renamed to include her name—The Mary Sears Women Pioneers in Oceanography Award. In 2000, the U.S. Navy named a 330-foot oceanographic survey ship after her and it was christened by Sears’ younger sister. The Mary Sears was the first oceanographic research vessel to be named for a woman, and it is still in use.

Sears led by example and influenced many, especially young women, coming up in the STEM fields today. Her career was her life, but she also enjoyed her friendships and her colleagues. Obstacles did not stop her. When she wanted a home, she purchased the land, went to the lumber yard, picked out the architectural plans, and had her house built in 1939. She swam the length of Nobska Beach from May to November into her 80s, and her strength of character is likely what made her the inspiration for Wonder Woman’s best friend, Etta Candy.

Commander (Ret.) Mary Sears, Ph.D. was indeed “a powerful, natural force” (as described by Dr. Roger Revelle) and she left an indelible mark on oceanography, WHOI, the place of women in STEM, and the world.

Posted in Gallery of Honorees