By Brett Freiburger and edited by Mai Maheigan and Theresa Gordon

Since 1930 the Woods Hole Oceanographic Institution has been witness to great changes in research, mission, and culture.  Mary Sears, Betty Bunce, and Roberta Eicke each contributed in their own way to the growth of the WHOI community, but many women in those first decades were not afforded similar opportunities. In the early days, many women joined the WHOI community as wives rather than as employees themselves. In the Cold War era cultural gender roles confined women to live within traditional norms of the times. It was not until 1973 that WHOI organized a formal Committee to address these women’s issues. We’re able to look back at one early WHOI community member through the Archive, allowing us to  delve into photographs, articles, and a glimpse into the life of a WHOI family and Elizabeth “Chickie” Stommel, who was married to renowned oceanographer Henry Stommel.

"My story includes the stories of other women who ‘married into’ oceanography. Some wives have, or had, careers in science. Others commute a hundred miles or more to city jobs. A number of women choose to work at home because of limited career opportunities in their locality. All of us have suffered from periods of loneliness; there isn’t one among us who has ‘had it easy’."
– Elizabeth “Chickie” Stommel (1984) 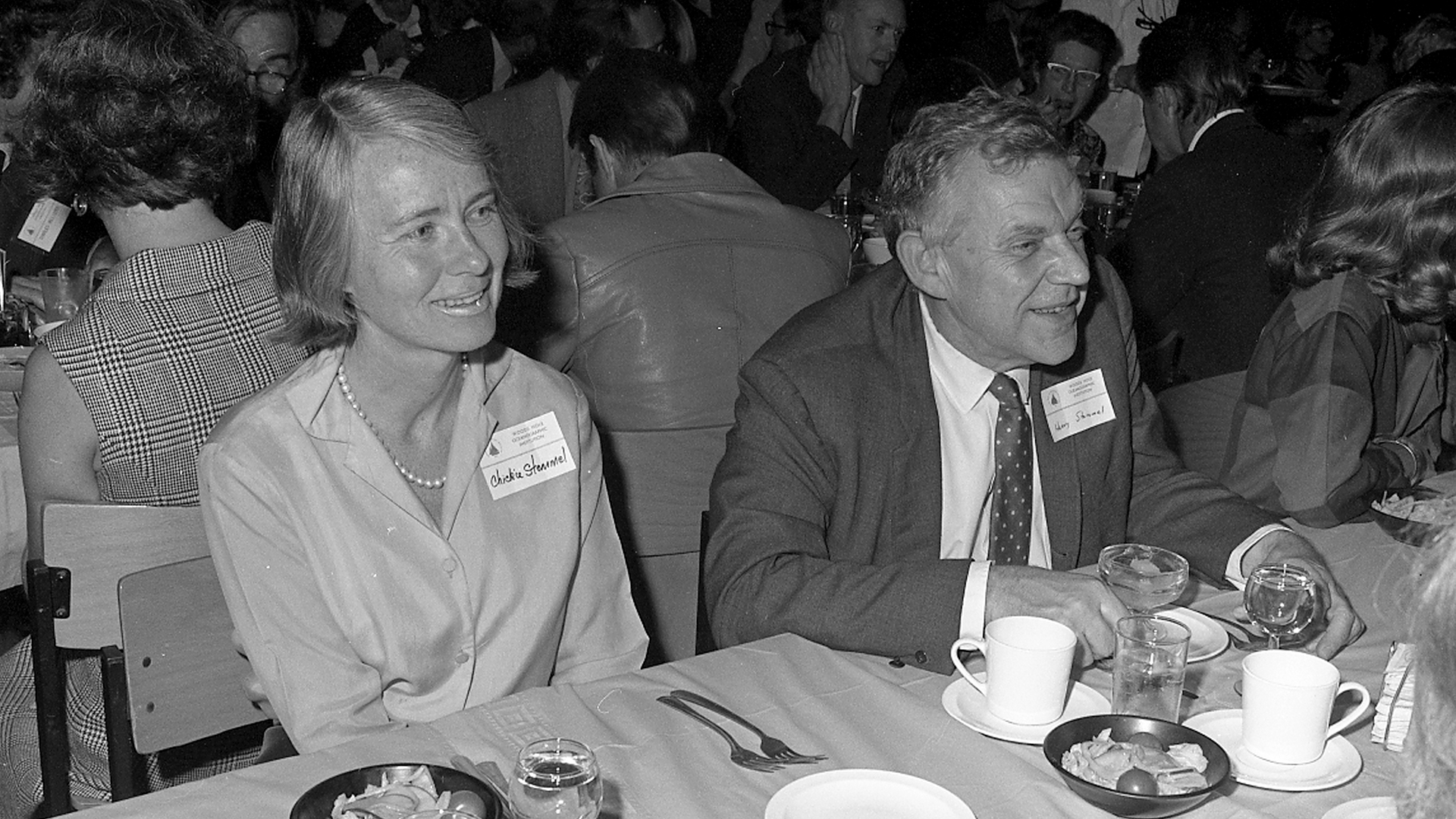 Henry and Chickie Brown met in April 1950 and were married that December “spite of the fact I knew nothing of science we seemed to understand each other.”  With marriage came Chickie’s expectation she was to “keep house, to learn to cook well, to form a circle of friends, to have beautiful babies.” Henry came from a vastly different experience. His father left the family when Henry was two, and his working mother often quarreled with her dependent sister and her own mother.  Together, Henry and Chickie were to “re-invent domestic happiness.”  Over their decades together their family grew to include two sons, a daughter, and a plethora of four-legged companions.

The Stommel home, six miles outside Woods Hole with few neighbors and no sidewalk, gave Mrs. Stommel the premonition that being wife of an oceanographer was isolating, lonely.  This feeling only increased when Henry was out to .  As time progressed, data gathering at sea was increasingly performed by technicians, while the scientists stayed ashore more to analyzed data in the lab on computers.  While technology allowed for less sea time, it introduced the ability to work longer in the lab or at home.  This “preoccupation with a computer terminal in an office or at home may…have an air of compulsiveness about it.”  The loneliness Chickie’s generation faced when husbands were at sea for weeks at a time continued even though technology kept them on land.  “For some wives [the loneliness] was replaced by the felling [sic] of being shut out by a computer screen.”

The issue of bringing one’s work home is not unique to the growth of technology, though it certainly facilitates it.  The work-home proximity for many WHOI families meant there was little time to transition from the problems in the lab to family life.  “The six mile drive home from Woods Hole was never long enough to prepare Henry for clamorous children and a tired wife,” Chickie wrote.  WHOI labs could also not contain the amount of planning and coordination involved in research cruises.  The tight finances and deadlines for many of the early projects at WHOI contributed to the stress of family work-life balance.  The financial strain on scientist’s work increased the loneliness felt by some wives.  Chickie, while pregnant with their first child and miserable with a cold, was told by Henry the cost of a ship meant he must leave.  “I saw that I was truly on my own and I was frightened. I’d have to scout for my own help.”  A supportive community of those “married into oceanography” helped Chickie and many others during these difficult absences.

The call of ocean and the absence of one parent left many WHOI wives with children learning how to outwit, outrun, and outlast them.  For Chickie, she “expected bad things to happen because Henry was at sea.  And they did.”  Their son Elijah and a friend nearly blew themselves up with a homemade explosive.  The eldest, Matthew, ran away at sixteen.  Daughter Abby would ride her horse into the surrounding woods and not return home until after dark.  Then there was the time that both boys were bitten by stray dogs in two different parts of town.  This stress frequently shared by both parents was shouldered by one alone. Many families dealt with this dynamic, at times finding a balance and other times not.  The WHOI community provided a network of support for the wives, and others used the absence of their husbands to take the family to visit relatives off Cape.

“Despite the added stress,” Chickie discovered that work at sea “was ultimately beneficial” giving her time to pursue her own interests—dipping into a heap of books, sitting at the typewriter developing short stories, visit with friends, quilting.  The growing WHOI community  remained close much as it had in the early days.  With the expansion of the MIT Joint Program an influx of students joined this community.  Mrs. Stommel expressed gratitude that “students were generous with their weekend time.”  Helping entertain the children and yard work earned the students a big dinner followed by games around the kitchen table.

The events recounted by Elizabeth “Chickie” Stommel are unique, but the emotional experience was and is shared by many that “married into oceanography”.  During her time as an oceanographer’s wife, she also enjoyed a supportive spouse; an advantage not held by all.  “Most women would like the freedom to do what few of their husbands are able to do,” she wrote of the man-of-the-house ability to experiment with new interests, continue their education regardless of finances, adjust routines of the house to suit their own needs, and revise their goals as they see fit.  “Wives who at first don’t know what they want may give up” the search for themselves because “they feel alone and unsupported in their struggle.”  She further discussed the role that a strong support system can play in a spouse’sability to grow.  Chickie wrote:

A husband who says to his wife: “Do whatever you want”, is usually telling her not to bother him with her personal dilemma.  She must answer hard questions on her own: is there enough money to spend on her further education and for necessary household help?  Is her husband going to feel abandoned during her absences from home or threatened by her success when it comes? And if at first she fails to succeed, will he urge her to try again?  If she happens to make wrong choices can they handle the consequences?  The interest and encouragement of ones spouse can lead to goals beyond what at first seemed possible, yet even with minimal support some…seem destined to flower.

The community of scientists, sailors, researchers, support staff and administrators that constitute WHOI has been a fundamental network of support that has helped the Institution’s growth over the past ninety years.  During all of this, a greater part of the WHOI community has contributed just as much – those “married into oceanography” and their families.  Diverse and layered support networks allow communities to flourish through the best of times and weather the worst of them.