The Spread of the Fukushima Signal after Two Years

Radionuclide samples taken as part of a 2013 hydrographic survey at 30°N in the Pacific indicated surface 134Cs concentrations of 3–5 Bq/m3 between 160°E and 160°W, and slightly lower concentrations west of 160°E. They revealed that the easternmost edge of Fukushima-derived 134Cs observed at 174.3°W in 2012 had progressed eastward across the basin to 160.6°W by 2013. This rate of progression suggested an eastward propagation speed of ~15° of longitude a year (~5 cm/s) during the 2 years since the accidental release. Consistent with the observations’ location to the south of the expected main axis of the plume, the observed eastward spread was found to be slightly slower than the estimates derived from near-surface drifters (see Rypina et al., 2014) as well as the speed predicted by numerical models. 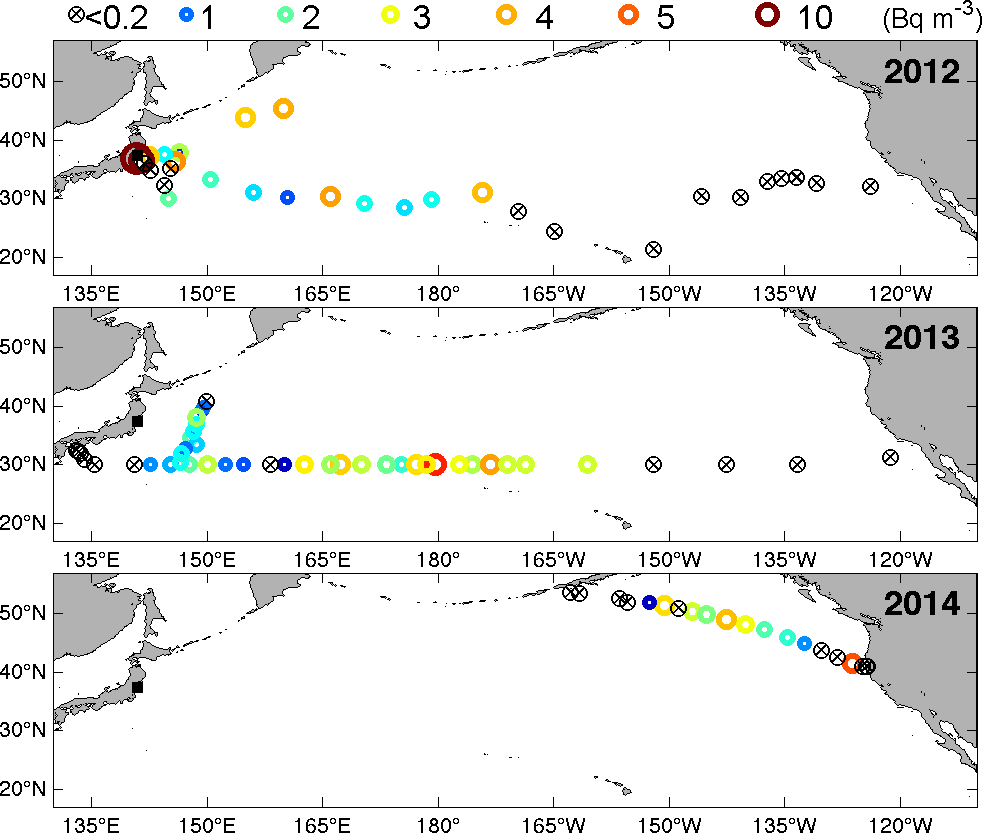 Profile samples showed a subsurface maximum in 134Cs and penetration to 500m west of 180°. Both these signals shoaled toward to the east.  The near-uniform vertical distribution of 137Cs between 152°W and 121.3°W in the top 500m is indicative of trace amounts of radionuclides remaining from weapons testing.

In the west, the subsurface maximum implied that the deep 134Cs penetration could be the result of local wintertime convective mixing and the associated mode water formation process. However, some of the observed Cs was located denser and deeper could not be explained by the deep convective mixing alone. In 2015, a number of possible theories were presented, but exactly how Fukushima-derived Cs could be brought down to 600 m within 2 years of the release had not yet to be clarified. The physical processes responsible for the deep 134Cs penetration in the western Pacific which at the time appeared to be related to distinct water mass subduction pathways were further investigated in 2018. (see Cedarholm et al., 2019)