In March 2011, the offshore earthquake, and resulting tsunami and aftershocks caused a loss of power at the FNPP. Soon thereafter, destabilization led to an explosive release of radioactive materials into the atmosphere and leakage of coolant water directly discharged into the ocean. Studies reporting the total magnitude of the FNPP release to the environment present a substantial range in no small part due to the range in estimates for total 137Cs entering the ocean which range from about 3.5 to 53 PBq, with equal amounts of 134Cs.

In the years since the accident, water samples have been collected by a number of different research groups located in a number of countries including Japan, Canada, the European Union, China and the United States throughout the North Pacific Ocean. The data have been analyzed to determine the breadth and timing of horizontal propagation and the depth of the vertical penetration of radionuclide contamination in the ocean. While our team of researchers also investigates the spread of the radioactivity, the main goal of this project is to use the unique information provided by the one-time, spring 2011, release of radionuclides to better understand the pathways and mixing of water in the North Pacific Ocean.

Our focus is on the cesium released from the power plants, namely 137Cs, which has a half-life of ~30 years and 134Cs, which has half-life of ~2 years. Where possible we have also looked at strontium (90Sr, ~29-year half-life) and iodine (129I, 15.7 million year half-life). We are combining these data with observations of other water properties collected by ships, satellites, drifters and floats and as well as output from numerical models illuminate the details of the horizontal spread and vertical mixing that has taken place since 2011 isotope release. 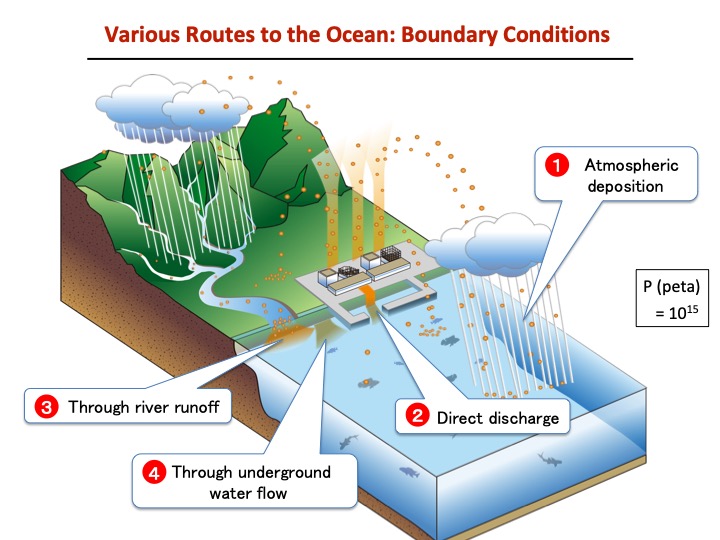 Schematic of FDNPP sources of radioactivity to the ocean. Provided courtesy of Prof. Yukio Masumoto. Original figure created by JAMSTEC.