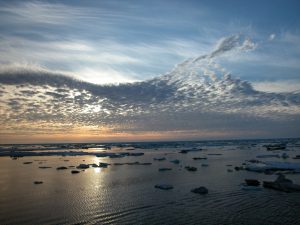 Many would agree that a steak dinner is unequivocally delicious. Unfortunately, the process of making that steak and getting it to your dinner plate is also unequivocally detrimental to the planet as we know it.

Despite contributing a massive amount of greenhouse gases, emissions from agriculture have lacked the media attention that fossil fuel emissions have garnered over the past few decades. This dearth in coverage is a testament to both our selective interest in causes of greenhouse gas emissions and aggressive lobbying from agricultural industries. However, a spotlight has recently been put on the greenhouse gas footprint of common meat products, beginning with proposed changes to meat production in the draft of the “Green New Deal” and further bolstered by the rampant forest fires in the Amazon resulting from deforestation for livestock pasture.

A short dive into the literature on livestock production results in some sobering numbers. A jaw-dropping 30% of terrestrial (ice-free) land use is occupied by the livestock sector. The livestock sector also accounts for one-third of global freshwater usage and one-third of global cropland to grow feed for livestock. The scale of the industry is hard to fathom and intimidating to confront; however, a shift in diet away from these products can go a long way in cutting back on emissions.

I became a pescatarian about two and half year ago, with the only fish in my diet being those that I collect myself (industrial fishing has myriad issues in itself that are well beyond the scope of this blog). This is not to say I am an environmental saint. I still regularly consume dairy at restaurants, too often drive my car to places I could bike or walk, and take a fair number of flights each year. However, given the aforementioned statistics, I felt that a change in diet was necessary. It was a slow process, first giving up beef, then pork, then chicken, and finally avoiding purchase of dairy products while grocery shopping. It is by no means necessary for everyone to make such a sharp dietary change. Any reduction in meat consumption helps cut emissions, whether it’s removing meat from your diet entirely or just replacing a few traditionally meat-heavy (namely beef) meals each week with vegetables.

Considering these staggering land use numbers, let’s dig in a bit deeper. The emission impact of deciding to switch to grain or vegetables over meat is striking. A 2014 study broke down the environmental cost of common animal products based on the energy they provide as food. One clear result is that beef is in a league of its own when it comes to per calorie environmental demands across all categories: land use, irrigation requirements, reactive nitrogen, and greenhouse gas emissions. Perhaps the final category is the one folks find most interesting and compelling. It is well-known that ruminant animals such as cattle produce exorbitant amounts of methane during their digestion process, and with methane being a 30 times more potent greenhouse gas than carbon dioxide, it is no wonder that beef runs away with this category. Methane alone accounts for about half of the greenhouse gas emissions of the livestock sector, followed by N2O from manure at nearly one third. For a comparison with grain, beef causes over ten times the greenhouse gas emissions that wheat or potato production does on a per calorie basis.

What about dairy, you may ask? Its production is substantially less demanding than beef production — owing to more efficient conversion of cattle feed to dairy calories — yet dairy production comes firmly in second in per calorie emissions. There is simply no getting around the required usage of cattle for the process. Even if you group in the more efficient livestock in calculations of average cost of meat consumption—namely pigs and poultry—the benefit from switching to vegetable protein is staggering. Production of vegetable protein requires about 50 times less land and emits 100 times fewer greenhouse gases than average livestock production. Further, a third of all cereal grain produced currently goes to livestock feed. Switching usage of that grain to feed human populations may aid in our struggle to feed an ever-increasing global population.

This brings up the critical aspect of efficiency of feed for livestock. Even if meat demand plateaus, this represents another agricultural area with room for improvement. For example, switching cattle feed from poorly digestible forage such as grass to highly digestible forage such as cereal grains and distilled grains would decrease the per individual land and emissions impact of cattle. However, this reduction in emissions is only about 1/10 of the reductions we would achieve if we were to totally stop consumption of beef products.

Reducing meat demands may reduce the size of the livestock sector, but this assumes a coherent movement to reduce meat consumption. Eliminating global meat consumption is well beyond reason for the foreseeable future and an unfair expectation for nations where much of the livestock production is for local nutrition and small-scale businesses. Despite this, there are signs of culture shift. For example, per capita beef consumption has declined by about one-third since 1970, according to the USDA (though it is important to note this shift was largely driven by human health concerns surrounding beef consumption and was coupled with a spike in poultry consumption). Given the fallout from the Amazon fires and a growing movement for climate action, we may finally have enough will-power to begin to change our eating habits. While an all-out end to beef consumption is highly unlikely, a 2016 study posits that a feasible global reduction in meat consumption could lead to a nearly 1/6 decrease in annual greenhouse gas emissions, which is enough to inspire hope.

I think it is also important to be honest about the situation we are in. Climate change is happening—we are not going to prevent it, it is simply too late for that. However, we can mitigate the rate of warming through reducing our personal emissions, including those coming from our diet. While it is easy to feel that your personal decisions are insignificant relative to the output from large industries, and you’re probably right, a coherent effort from individuals across the country and globe can lead to major improvements. Think of this kind of defeatism as similar to not voting. In both cases, large corporations and industries have a disproportionate amount of control over greenhouse gas emissions and political power, but this does not mean that your effort is valueless. Making conscientious and informed decisions can lead to global improvements for carbon emissions and food security.