Over the centuries, we have focused a great deal of brainpower on conquering the messes that water alone cannot wash away. This obsession with spotless surfaces produced some of the most pervasive classes of synthetic chemicals: soaps and solvents. Heavy grease on machinery, oil spills, drug manufacturing, and paint removal are all cases when water doesn’t cut it. Down to the mundane messes of the everyday—that weird spot on the oven, post-workout funk, the scum left after your shower—all might require a bit more power than water alone can provide. The evolution of soaps and solvents encompasses diverse and specific problems. Understanding the differences between these chemical innovations and their uses is important for the environment.

We’ve known for ages that a foamy, bubbly bucket of soapy water does the trick for everyday messes. The chemistry of soap dates as early as 2800 BC, when the Babylonians formulated the material from water, alkali, and cassia oil. The reaction that makes soap is relatively easy to visualize. Water, a common solvent, is mixed with “alkali” – usually a simple base. Bases like sodium hydroxide (lye) have been produced for centuries. A Yemeni king described this process in detail in a 13th-century text, repeatedly running water over ash and lime (the mineral, not the citrus fruit) to obtain an alkaline broth for the rest of the soap-making.

The cassia oil mentioned by the Babylonians is just one possibility for the other ingredient in soap. The secret ingredient is fat. Fats from both plants and animals contain triglycerides, each like three ribbons hooked to a piece of Velcro. This strip of Velcro is called glycerol and the ribbons are fatty acids. This general structure differs among organisms, but the most significant differences for soap components are the fatty acids. These ribbons are just long strings of carbon and hydrogen with an acidic head.

If we Babylonians mix our base solution and our fat, a rearrangement occurs. This reaction is called (appropriately) saponification, which slices fat into soap and glycerol by inserting the base at a weak point.

The mechanistic description above sounds rather violent, but at the tiny scale of molecules it is often appropriate and helpful to imagine the reactions this way. Individual chemical reactions like saponification happen in a flash, much like how electricity races through the processor of a computer, flipping transistors at tremendous speeds. All we see is the end result of the quick reaction being performed millions of times in a row: a mixture turning to soap or a webpage loading slowly. Speed is part of the story, but the vigor of individual reactants matters. Hydroxide salts are strong bases, corrosive and dangerous to use. This high-powered combination transforms caustic salts and literal fat into something we use to clean our skin. Transformation of violent energies to useful products is a motif in the business of living: cooking meat over a scorching flame, digesting plants with a tank of acid within our bodies, and finally respiration—the process by which our cells slowly burn nutrients to create a controlled flow of energy.

Many Options, One Simple Idea

Cleaning products around a house may denote “surfactants” on their ingredient lists, and soap is just one type of surfactant. A surfactant reduces the surface tension of water. At a glance, surface tension is the property that makes water refuse to mix with oils. If you pour water on an oily surface, it will bead up and roll off. 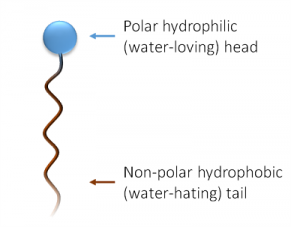 A surfactant is a chemical chameleon. A salt like sodium chloride will dissolve in water because water is a polar molecule, and the associated sodium and chloride ions can easily be ripped apart and happily exist in water, where the poles of water molecules can stick to them like lint to a static-filled shirt. The heads of soaps are also polar, being salts of fatty acids. Water can easily take them up and hold them. They are hydrophilic or water-loving. The long carbon chains, however, have no isolated charge or polar areas, and water cannot effectively stick to them. These tails are afraid of the water they’re surrounded by (hydrophobic) and would like to stick to something more self-similar.

What’s more similar to a hydrophobic tail than water? Grease, oil, and all the grime you’re trying to scrub off of the kitchen counter. Spread a layer of soapy water on that grime, and the tails will stick right to it, while the polar heads remain next to (and hydrated by) the water. Aided by the surfactant’s simultaneous polar/nonpolar behavior, the water can stick to oily surfaces—that is, its surface tension has been reduced.

Many different surfactants exist beyond soap, some with positive instead of negatively-charged heads, some with complex multi-tailed or multi-charged structures, and some entirely uncharged. Many of these compounds are artificial, and involve significantly more convoluted processing than the saponification reaction. These more job-specific surfactants are applied for situations like high temperatures, hard water, and sensitive skin.

The principle of most of these surfactants is the same as for normal soap. The nonpolar tails are stuck to some sort of grease or oil, while the polar heads are still surrounded by water. That does not make a surface clean; the grime needs to be lifted somehow. The water flows past, the soap molecules bounce around, and you put in a brush and some elbow grease. Gradually, the surfactant gets under, atop, and all around tiny bits of the material, tricking the water into holding onto polar heads on all sides while the tails remain embedded in a glob of goo. 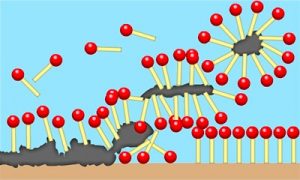 You’ve just constructed a micelle. Micelles are a comfy group of surfactant molecules, where the hydrophilic heads get to be in the water and the tails get to cuddle up in the middle with each other. These fuzzy bubbles can form without anything in the center, and they frequently do in solution, before your sponge even touches the dishes.

Soap and the Origin of Life

Soaps are simple, and that gives them a unique role among surfactants. Fatty acids occur frequently in nature, and may be formed without any biological intervention. If fatty acids form micelles, the micelles can bump into each other and combine, like a game of snake, until they become so long that the two ends collide and fuse, forming a dual-walled structure: a vesicle. There are some great animations of how this process may have occurred on Earth before life ever evolved. Vesicles could have been an essential component of protocells, spontaneous testing vessels for self-replicating genetic information. What happens every time you use soap may be a critical part of how life first came to be.

In many modern applications, soaps and even harsher surfactants don’t fare so well at tricking tough grime into water. Some compounds are too heavy to dissolve or would need absurd quantities of surfactant. Fortunately, water is not the only liquid on Earth. Many organic solvents (that is, liquids made of compounds rich in carbon) can easily dissolve what water will not. Organic molecules—some polar, some completely nonpolar—like ethanol, hexane, toluene, and a whole host of hydrocarbons outfitted with chlorine atoms do a great job at dissolving compounds that water won’t touch.

Many examples of these exist outside the lab. Water and dish soap won’t remove nail polish, but acetone will do it in seconds. Bike chain grease is a persistent mess, but brush it with diesel and it will fall right off. In industry, chlorinated solvents have been used for decades as degreasers, dry-cleaning agents, and even anesthetics and a decaffeinating agent for coffee.

Of course, in our quest to refine, clean, and shine everything, some measures have caused considerable harm. Chlorinated solvents are generally toxic and carcinogenic. Many of these solvents are denser than water, and when they sink into the ground form pools that slowly dissolve into groundwater. Many gasoline and diesel-derived hydrocarbon solvents (like benzene) are not only toxic and flammable, but volatile enough to be a hazard when spilled.

Because of their excessive use and lax disposal, solvents have become (ironically) messes that will cost billions of dollars to clean, and have already been part of the case for Superfund (CERCLA), the most sharp-toothed pollution control law the US has ever passed. Individual contamination sites often are multimillion-dollar, multi-year cleanup operations and in many cases only came to attention after citizens were exposed to pollutants in the air or water. Love Canal, perhaps most well-known example, involved more than solvents, but stands as a black, oily stain on our history of chemical dominion. Synthetic surfactants have their complications, too. They have evolved over time as concerns about biodegradability and long-term toxicity emerged, but these specialized soap analogues are now of some prominence in remediating contaminated soils.

Contemplation and vigilance are essential to using chemistry safely. This is taught in labs around the world, but even that is not quite good enough. To create and use solvents and surfactants, we must consider not just their effectiveness, but their effects on us and our surroundings into the distant future. We can do better in our quest for cleanliness and control, but whatever we do, we will still have soap.