The Society for Women in Marine Science brings together marine scientists of all career levels to discuss the diverse experiences of women in marine science, celebrate the research done by women in the field, and promote the visibility of women in the marine science community. The Society for Women in Marine Science (SWMS) was established in 2014 by a group of women at Woods Hole Oceanographic Institution (WHOI), and is now run by volunteer early-career scientists based around the US.

The fourth annual SWMS symposium, which took place in Woods Hole, MA, on November 3rd, 2017, was our largest and most successful meeting so far. After the social media and communications queen Gabriela Serrato-Marks joined the steering committee, we’ve seen our membership grow in incredible ways. We have members across New England at a variety of institutions and career stages, and we’ve seen our network grow across the U.S., and even as far away as Brazil. Our Facebook group has 268 members, and our Twitter account has 686 followers. Over the past year, excited women students and postdocs at other institutions have begun to establish chapters, beginning with the University of Rhode Island (URI) and now including the Virginia Institute of Marine Science, the University of Washington, the Black Girls Dive Foundation, and the University of Delaware.

Our theme this year is “Swimming in Confidence: Declaring your Scientific Authority,” submitted to the steering committee by URI founding chapter member Jillian Freese, who also tweeted from the SWMS account throughout the day. We were optimistic that the 100-person capacity of last year’s venue would be insufficient for the demand this year, so we booked the Redfield Auditorium at WHOI, which can fit 150 people pretty comfortably. Not only did we have over 150 people registered, we had a waiting list that just kept growing right up until the day of the symposium!

The welcoming remarks for the symposium were given by Dr. Larry Madin, WHOI’s Vice President for Research. Representing the administration of WHOI, Larry’s thoughtful comments formally welcomed SWMS to the Institution while reflecting on the growth of women scientists over the past few decades. He mentioned that some of the early successful female marine scientists, like Sylvia Earle, were notable in part because there were so few women, and that he was excited to see the auditorium full of women who are current and future leaders in the field. 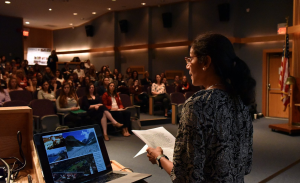 Dr. Amala Mahadevan delivers her keynote talk, titled “By Choice.” It is available to watch on the WHOI Facebook.

In the keynote talk, titled “By Choice,” Dr. Amala Mahadevan spoke about her educational, scientific, and family journey. She talked about the choices she made as the ‘trailing spouse,’ meaning that she graduated from her PhD later than her husband, such that many of the decisions about where to live and work were made based on his career moves. Trained as a physicist in fluid dynamics, Amala has spent much of her career studying the ocean through numerical and data science approaches. She was able to raise enough funding to be research faculty at institutions near where her husband was working, but this meant she was often a research group of one, or maybe two when she was able to hire a postdoc. Although Amala has been a formidable scientist for much longer, she said that she feels her career only really started when she began working at WHOI as part of a community of oceanographers. “Research groups are greater than the sum of their parts,” she stated, and also touched briefly on the importance (and difficulty) of working on racial diversity as well as gender equity. Overall, her talk stressed the power of making and owning our choices, and the value of community. Amala’s talk was livestreamed on the WHOI Facebook page and is archived there.
The morning was rounded out by a panel discussion titled “Interrogating the leaky pipeline.” This panel was stacked with certified bad-asses Heather Benway (Executive Officer, Ocean Carbon and Biogeochemistry Program), Paula Bontempi (Program Manager, Ocean Biology and Biogeochemistry, NASA), Pamela Neubert (Associate Vice President of Marine Science, AECOM), and Meg Tivey (Vice President for Academic Programs and Dean, WHOI) and was moderated by Tracey Dalton (Professor and Chair, Marine Affairs Dept, URI). The ‘leaky pipeline’ is a metaphor intended to shine a light on the progressive decline in representation of women at successive career stages. However, this (possibly) outdated metaphor relies on the premise that PhD programs are training grounds for tenure-track faculty positions at academic institutions. As Heather Benway put it, “If we were all destined for tenure-track positions, a lot of science and discovery wouldn’t have happened.” There was a nice discussion of how women can ‘leak back in’ and how programs like “Stop the clock” (where people can pause their contract, to have extra time before applying for promotion, etc) are indispensable tools for giving people the flexibility to decrease their hours during periods of their life when they need to focus on their personal life, be it for the purpose of childbirth and caring for a newborn, caring for an ailing family member, their own illness, etc. Paula Bontempi also stressed that program managers have tools to help extend the timeline of funding for similar reasons. On the theme of community, audience members opened up about how transitions and thoughts of the future are scary, and it was clear that talking about these experiences will make us feel less alone, but also that you have to just do the things that scare you.

Over lunch, the group broke up into 7 groups of about 20 people each and dispersed across WHOI’s Village campus to continue the discussion that had begun during the panel. The steering committee stayed behind to take a breath and get ourselves organized for the afternoon, and we were completely amazed and overwhelmed with how well these lunchtime discussions went! I was initially concerned that people would want free time rather than a scheduled activity over their lunch break, but people didn’t want to come back from their discussion groups! The groups reported back, and the topics ranged from more traditional topics of gender equity and female social conditioning to intersectional issues like race, culture, chronic disease, and disability. The lunchtime discussions appeared to have been overwhelmingly positive discussions of how to find our own confident voices and how to support one another on our journeys.

In the afternoon, we had two sessions of invited talks. The first, “Innovative Research,” showcased 4 women who are doing awesome science. Isla Castañeda (UMass Amherst), Susanne Menden-Deuer (URI), and Kate Lowry (WHOI) each spoke, and Elsie Sunderland (Harvard) unfortunately was unable to attend due to illness. A highlight from this session was Susanne’s poignant comment about the diversity of successful phytoplankton species and the crucial role of this diversity in making the Earth habitable: “If the single-celled plankton can do it, you can do it.” Isla talked about her research on paleoclimate indices using complex biomarkers. Kate talked about studying Arctic phytoplankton amid sea-ice dynamics, where satellite data misrepresents the productivity, particularly in a changing Arctic. These women are working at the forefront of their fields, pushing the scientific envelope and challenging long-held ideas. 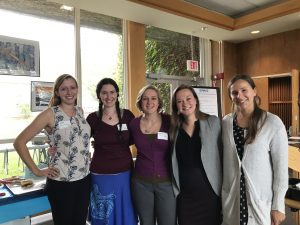 The steering committee, composed of 2 MIT/WHOI JP students, a WHOI postdoctoral scholar, and 2 URI-GSO students, meets primarily over Skype. This is the first time that the 5 of us have been all in the same room! (left to right) Gabriela Serrato-Marks, Hilary Palevsky, Chrissy Hernandez, Alexa Sterling, and Anna Robuck.

The final session of the afternoon, “The Journey to Confidence,” was a culmination of so much work and passion for the steering committee. This session focuses on telling the personal stories of women, because SWMS believes that showcasing the human element is crucial to the empowerment of women in science. This year, we are so happy that Carrie Solomon agreed to participate in our symposium. Carrie is on the faculty at Gallaudet University, where she teaches, mentors students, and performs research on nutrient and microbial dynamics in aquatic environments. Carrie is also deaf, and her participation in this symposium taught us (and WHOI) about how to facilitate the participation of individuals who are deaf or hard of hearing in a science conference. Carrie gave a funny, heartfelt, and eye-opening talk about her science journey and the importance of focusing on intersectional issues. She also gave us a fantastic alternative to the metaphor of the leaky pipeline- a tree: “You’re not a leak, you’re a branch.” The other speakers in this session were Andone Lavery (WHOI), Alexa Dayton (Gulf of Maine Research Institute), and Sucharita Gopal (Boston University). A highlight for me was when Andone, who opened up about personal challenges with her health and a child with developmental difficulties, began her talk by stating that she had been thinking over the course of the day how she comes from a very educationally privileged background, because it is just as important to recognize our privileges as it is to talk about our obstacles. Alexa talked about her decision to completely change careers after 15 years working in the business world, and modeled confidence by talking about her amazing accomplishments with the Marine Resources Education Program and being asked to help a British charity establish a similar program in the U.K. Finally, Sucharita Gopal closed out the day with some advice on how women in science need to “Lean In” and how investing in people gives you the most bang for your buck.

A comment that really hit home for me was about how women downplay their accomplishments by saying that we were “lucky” to have these good things “happen to” us, but really it is “the luck of the well-prepared.” So instead of saying that I feel lucky, I will close by saying that I am so grateful to be part of SWMS. I get to work with my friends to plan this symposium and keep SWMS running. I get to invite my friends, colleagues, mentors, and role models to speak, and I get to learn from all these amazing women. And at the end of the day, I get to drink a beer with some of these same people! Thank you, from the bottom of my heart, to everyone who made this symposium possible.