Had we just made an exciting new discovery? Was this evidence of an imminent geomagnetic reversal? Was a mysterious lump of magnetite on the seafloor cancelling out the ambient field?…or did the magnetometer just break again?

The magnetometer just broke again — for good, this time. 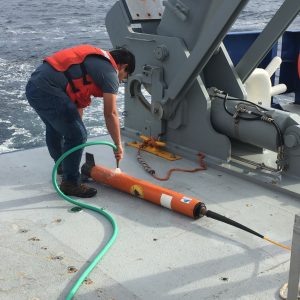 Washing seawater off of the magnetometer after recovery. Photo by J.-A. Olive.

We’d been having trouble with Maggie (the magnetometer) since the very beginning of our trip. Maggie was the only off-board instrument we used during SCARF (Student-led Cruise Along a Ridge Flowline) as we crossed the Atlantic from the Azores to Woods Hole aboard the R/V Neil Armstrong, leg AR23-02. Besides measuring the magnetic field strength with Maggie, we also made use of some of the Armstrong‘s ship-board instrumentation. We collected gravity readings, which can tell us about the distribution of mass at and below the seafloor, and we ran the multibeam sonar system non-stop during the cruise to measure the topography of the seafloor along our track. But the magnetometer — a bright orange cylinder about a meter long, with little black fins on one end — was perhaps the most important instrument for our cruise objectives. 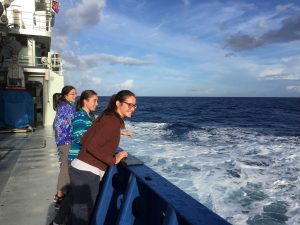 Happy graduate students on deck as we cross over the axial valley of the Mid-Atlantic Ridge. Photo by J.-A. Olive.

As we steamed, we would be travelling over nearly 60 million years’ worth of seafloor spreading from the Mid-Atlantic Ridge. The main goal of our cruise was to compare variations in gravity and bathymetry over that period of time.

The gravity data can tell us how thick the oceanic crust is. When we compare that to the bathymetry, we can see if high points in the seafloor topography are mirrored at the base of the oceanic crust, or if they’re just piles of material sitting on top of the oceanic plate. Then, we use the magnetization data to estimate the age of the seafloor by comparing our observations to a known timescale of when geomagnetic field reversals have occurred over Earth’s history. We need those age estimates to properly process the gravity data, because the corrections applied to the raw data from the gravimeter depend on seafloor age. Also, if we have ages along our cruise track, we can look at the frequency spectrum of the seafloor topography and maybe learn something about how magmatic activity at the Mid-Atlantic Ridge has varied through time. Without Maggie the magnetometer, we don’t have the seafloor age constraints that we need to really use the rest of the data we’ve collected. 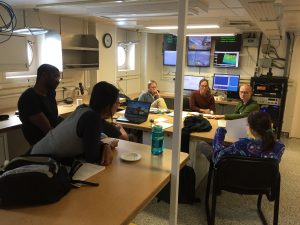 A piece of the magnetometer‘s cable connector had not made it onto the ship before we left the Azores, so our SSSG (Shipboard Scientific Services Group) technician Amy Simoneau had heroically spliced together a decent workaround. Still, the data we were getting were noisy and the computer program collecting the magnetometer readings kept crashing until finally the patched-together system gave up and the reading dropped from a reasonable 43,000 nanoTesla to 0 (for reference, a strong refrigerator magnet is about 10,000,000 nT). Around 16:40 we put on our steel-toed boots and work vests (required safety gear on the working deck of a U.S. research vessel for this kind of operation) and pulled Maggie out of the water. As roughly 300 meters (~1000 feet) of bright yellow cable wound onto the spool, we got ready to deploy the spare as fast as possible, trying to minimize the gap in our data as the ship continued on course.

The trip was run as part of a seminar class at WHOI, so in addition to the science objectives, it was an opportunity for us students to learn how to collect and process basic marine geophysical data, and get some experience with planning and leading an oceanographic research cruise. Ten days at sea is much less than a full-on multi-week research cruise, but a lot more than a day trip on a small boat. Out of ten in our science party (6 students, 2 postdocs, and 2 scientists), six had never been on a multi-day research cruise before.

A preliminary bathymetry map. The dark band near the upper left is the axial valley of the Mid-Atlantic Ridge.

And we certainly did learn a lot: on day one, none of us had ever cleaned multibeam data outside of a 1-hour tutorial before leaving for the Azores, but spending ten days of 8-hour watches picking bad pings out of the sonar returns is a great way to build that skill. After learning to calculate gravity anomalies and reduce magnetization measurements to the pole, I have a new appreciation for just how much work goes into creating these basic data products that so many scientists use every day. Also, after a series of 25-hour days easing from Azores time back into Eastern Standard, I’ve developed a love for chocolate-covered espresso beans, and am in awe of the crew members who live with such upside-down, constantly shifting sleep schedules for months at a time. 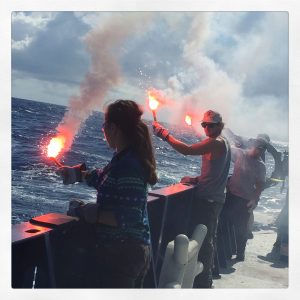 The cruise was also an excellent introduction to some of the more entertaining aspects of life at sea. With the help of the sharp-eyed crew, we saw whales to starboard, bioluminescence off the fantail marking our path, and pods of dolphins frolicking across the bow. I got to try on a “gumby” survival suit as part of the safety demo, Vero got to drive the boat late one night, and we all celebrated a successful safety drill by setting off two dozen expired distress flares with the crew (they do this periodically, when no other vessels are around, because what else are expired flares good for?).

It’s a shame to have to leave almost as soon as we all got our sea legs. I know I’ll miss looking out the window and catching a glimpse of flying fish skipping over the swells, but it’s time to pick up our lives on land again. 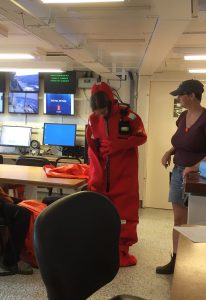 The author, fashionably attired in a gumby suit. Photo by J.-A. Olive.

Like any other research cruise, the work continues back on shore: we’ll keep processing and analyzing the data over the rest of the semester, and I’m excited to see what it will tell us. I know I’m not the only one dreaming of another sea voyage, so if anyone hears of some spare science berths on an upcoming cruise, I know a few people who might be interested…

Many thanks to Captain Kent Sheasley, Amy Simoneau, and the crew of R/V Neil Armstrong. Thanks also to NSF and WHOI for making this trip possible.