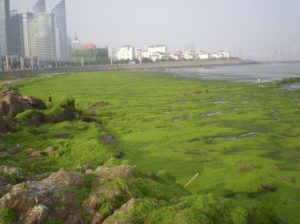 Last month, I packed my bags and made the trek out of the quickly cooling Northeast to Orange Beach, Alabama. The reason? To nerd out about all things algae at the national Harmful Algal Bloom symposium. It was a week-long deep dive into the current science on harmful algal blooms, from bloom drivers to potential mitigation techniques to impacts on health. In addition to the science, however, what struck me about the conference was the focus on communication with communities beyond academia.

Harmful algal blooms (or HABs) are massive explosions of algae in freshwater and marine environments that have negative consequences for wildlife and humans. What makes HABs such an interesting topic is that – unlike other oceanographic processes which often occur invisibly out at sea – HABs are often very visible (think the massive bloom of Ulva in China during the 2008 Olympics or manatee-killing red tides in the Gulf of Mexico) and can have dramatic effects on communities situated near affected bodies of water. These algal blooms can contribute to declining oxygen conditions or produce deadly toxins which can accumulate in seafood. These can result in massive wildlife die-offs as well as fishery closures to avoid human poisonings.

The economic, cultural, and health effects of HABs can be massive. This was emphasized by many of the speakers, including the plenary speaker Dr. Stephanie Moore, who takes a social science approach to assessing the cultural and economic effects of shellfish closures. Using surveys of communities where blooms occur, she showed that HABs can have serious impacts beyond just the direct effect on fishers – when HABs occur, they can have ripple effects on local industries and present a threat to economic security as well as various cultural practices like razor clam harvesting. Given such wide-reaching implications, communicating the science and risks of HABs in order to protect the public presents a major challenge. 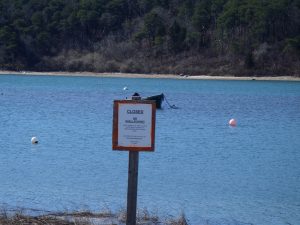 Why are HABs such a challenge to communicate? Scientifically, they are a complex phenomenon, dependent on many different variables, and are often difficult to predict. To compound the difficulty, they can occur quite suddenly and need an immediate response in order to protect human and animal health. As a result, it can be difficult to give a clear message to the public about what practices are safe and unsafe during a bloom. At the same time, being too alarmist for the sake of safety can also have major consequences.

One infamous algal bloom occurred in 2014, when a massive bloom of microcystins in Lake Erie shut down the water supply of Toledo, Ohio for several days. Over half a million citizens woke up to alerts not to drink, cook with, or (for those with weak immune systems) even touch the tap water, without many other details about what was causing the crisis or how long it would last. As you might expect, this messaging stoked panic from a community suddenly without safe drinking water, and fueled rumors and misinformation. The fear from this event continues today, when many still don’t trust the tap water in Toledo. In another case from 2015, following fishery closures resulting from a massive bloom of Pseudo nitzschia, a major concern of fishermen was that consumers would no longer trust shellfish at all (even when there is no danger of intoxication) and the market would collapse. These fears make clear the importance – but also the risks – in communicating HAB science, and the need for a carefully thought out effort on how to do so responsibly.

Communicating impacts to the public

One of the main things we can do as academics is to seek out opportunities to involve stakeholders, regulators, and non-academics in scientific discussions and also make those discussions accessible. Throughout the conference, I found myself talking to almost as many non-academics – whether they be stakeholders, public health officials, government scientists, employees with a tribe, or regulators – as academics. As someone who researches toxicity and human health on a high level, it’s easy to sometimes lose track of what happens after the data gets generated. It was refreshing to be able to speak directly with people who work on the ground doing shellfish testing, talking to community members, etc. in direct support of public needs.

When creating those spaces, we should also be prepared to listen. Later in the week, we had an opportunity to attend a meeting with stakeholders in the shellfishing and tourism industry – for whom HABs aren’t just an academic interest, but a livelihood. What they communicated was a need for real time information on not just when closures might occur, but also how long they might last, in order to inform other choices on alternative fishing, permits, etc. At a separate meeting, public health specialists conveyed the need for communication with the public – and especially the medical community – on how to identify algae as well as symptoms of poisoning in order to respond to a bloom. Other concerns included how exposure to toxins might affect individuals with pre-existing conditions, or who might be exposed to multiple toxins/toxicants simultaneously. These are all examples of really important gaps that science can help fill and the critical need for cross-communication between groups.

Throughout the conference, the speakers repeatedly talked about the importance of building trust by working with and listening to impacted communities, rather than just handing over regulations in a top-down manner. Algal blooms are complex social and economic problems, and closing down fisheries unnecessarily or without good communication can have devastating effects on fishing communities and erode trust in scientific and governmental organizations. In comparison, working with communities to determine what they need and what scientific gaps should be filled shows that scientists care about the consequences of our science. At the end of the day, scientists, regulators, and stakeholders have the shared interest of understanding and maintaining these natural resources, and have a lot to learn from each other. To conclude, this is a community that cares greatly about doing sound science, but also science that matters and communicating it to the people who are most impacted. Thanks to the efforts of the conference organizers to bring these issues to the forefront, I returned from Alabama energized not just to jump back into research, but to do work that marries science and management for real change.