All the attendees of the GCC 2017 outside of MBL. Photo by Suzi Clark.

While international world leaders met in Bonn to discuss how to address our changing climate, a lesser known climate-orientated meeting occurred simultaneously. In Woods Hole, Massachusetts, 84 graduate students from many disciplines of climate research gathered for the 11th annual Graduate Climate Conference (GCC). Graduate students from the Massachusetts Institution of Technology (MIT) or the University of Washington (UW) alternate planning this unique conference every year. This year it was MIT’s turn. A group of students from the Earth, Atmosphere, and Planetary Sciences (EAPS) department organized the conference which was held at the Marine Biological Laboratory (MBL) in Woods Hole. 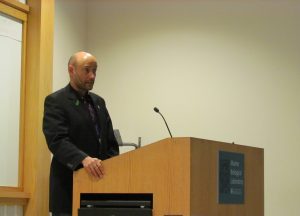 From November 10 – 12, we buzzed from oral presentations, poster sessions, and a key note address, to outreach activities. We began with registration, setting people up with their rooms, travel grants, meals, and SWAG (a GCC mug and drawstring bag). The first sessions began quickly after, jumping first into presentations on atmosphere and ocean climate dynamics, and then into human policy and dimensions. We heard about how to use global climate models to look at the Asian monsoons, and then to hearing about human interactions with climate including the psychology of how people adapt to climate and how scientist could best aid policy makers. Though most of us were studying climate dynamics seeing how many questions people asked in the human policy and dimensions session showed me how much these students care about applying their science beyond academics.

As part of the organizing committee, we put an emphasis on broader impacts and outreach beyond the scientific bubble. In today’s political atmosphere with the federal government taking an active stance against climate research, we felt that climate researchers have a responsibility and duty to communicate the changes undergoing in our world to a larger audience. This sentiment was reflected in both the keynote speaker and outreach activities we organized for the night of November 10th.

We chose a keynote speaker outside of scientific research to bring us out of our bubble: Quinton Zondervan who was elected to the Cambridge City Council on November 6th, running on a climate centric platform. Quinton fought for climate activism as an undergraduate, a business owner, a non-profit leader, and now will do so as a government official. At the conference, he discussed how to be an effective climate activist, how to communicate climate science, as well as the general importance of the research that we are doing. As scientists, we believe we are aiming to find the truth about the world, and because of this we often try to just communicate using our research and by adding facts and information to our arguments. However, Quinton spoke about finding common ground, sometimes through facts, but often through emotional connections that would lead people to adopt climate adaptive behaviors. In the end, he talked to us about the importance of continuing our science and communicating effectively. Policy makers can only make informed decisions if they have and understand good information. 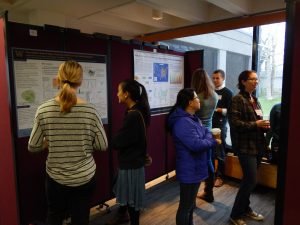 After dinner, we broke out into three different groups to partake in outreach training activities. These outreach activities surrounding three major themes, community-based research, science advocacy, and science communication. Dr. Marcos Luna, a Professor of Geography and the Coordinator of the Graduate Geo-Information Science Program at Salem State University, led a workshop detailing mistakes scientist often make in trying to work with communities with different ideologies. He organized an exercise with a group of 4 students, each trying to convince the others of a belief, and pointed out when they made some of these common errors in communication. The science advocacy discussion was led by Shira Rascoe, Director of Communications for the Scholars Strategy Network, who discussed additional ways to engage with the public. Lastly, Gabi Seratto-Marks, a PhD student in the MIT-WHOI Joint Program in Oceanography, discussed how to effectively communicate complex science topics. She often uses twitter as her medium, limiting the communication of complicated ideas down to 140 (or now 280) characters.

The next two days rushed by with poster sessions and more talks. Topics ranged from paleoclimate (the study of past climates), mitigation strategies, biological impacts, and more climate dynamics. Coffee breaks between sessions were filled with in-depth discussions of the recent talks, and trying to plan future collaborations. It was clear that participants felt refreshed by the wide range of topics. As most students have limited funding to attend conferences, they are often limited to those directly applicable to their research. But here, graduate students came from diverse backgrounds, including teachers, a farmer, and a fisherman. We delved into discussions beyond climate science, into discussing projects in citizen science, economics, and political science. The mood of the conference was one of unity, and wanting to work together to improve the world through research and communication. 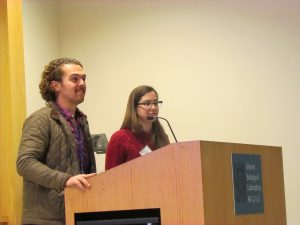 As is tradition at the GCC, Saturday night heralded the costume party at Captain Kidd. GCC typically occurs closer to Halloween than we had planned it, but that didn’t stop us. After a full 11 hours of engaging in science discussion at talks, posters, and meals, drinks and a party were warmly welcomed. Though some used the party to relax and get to know fellow climate researchers, whispers of scientific debate could still be heard well into the night. It is very hard to take the science out of a scientist even for just a night…

Three days of eating, sleeping, presenting, and drinking with a group of climate researchers can be exhausting, while also incredibly intellectually stimulating. Despite the drain, we all know that greater communication among scientists, policy makers, and the public is necessary to move forward and adapt to the changing climate. The GCC is a way to bring together the future leaders in climate research, to prepare us to work together towards a better future for our earth.