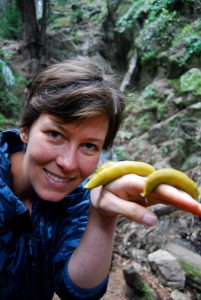 The author posing with some slimy friends.

Many scientists can link their research interests or career trajectory back to a childhood fascination. The ability to recognize beauty and intrigue in the mundane and every-day is a talent strongest in childhood, and many scientists seem to maintain this ability throughout life. Such a childhood fascination struck me when I discovered the peaceful, intricate world of the snail. It started in elementary school when I checked out a library book about “fun projects with nature” that described painting numbers on the shells of snails to keep track of individuals. I was hooked! 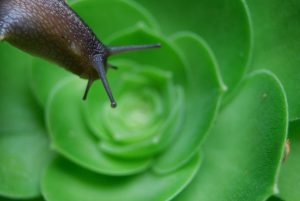 As I matured through my scientific career so did my fascination with Gastropoda, from my sixth-grade science fair project to my PhD. I found this class of animals so well-represented in ecology, evolution, and physiology that I began to wonder if I could let snails lead me around the world. The ensuing chase has indeed been a wild ride. With this story, I hope to share the geographically diverse ecosystems in which I have studied gastropods, and communicate a small measure of the marvel I discovered in the lives of these often-overlooked creatures.

By keeping snails as pets for many years I became familiar with the secret lives of these peaceful shelled invertebrates. My first snails were the common garden variety (Cornu aspersum), an introduced species from Europe that likely lives in your own yard! The trial-and-error process of snail keeping had a steep learning curve and constantly overthrew my preconceptions. A common misconception is that snails ‘live in their shell’. While they do recede in their shell for defense, the shell is a permanent part of their body, containing all their internal organs, and growing as they grow. Despite their protective shell, snails seek additional shelter. Mine returned to the same overturned pot every day and slept huddled together in groups. 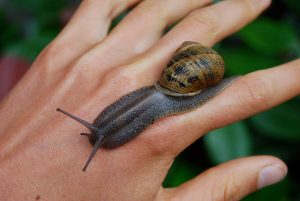 Most interesting to me was the habit of estivation, which is a dormancy like hibernation but instead triggered by hot, dry conditions. In the summer my snails dug themselves about two inches underground, sealed off their shell opening with mucus, and remained that way for three months, no eating, no drinking. When the weather was wet, they loved it! They would stick their whole face in pools of water and drink, or even direct their head into running water and douse their body. 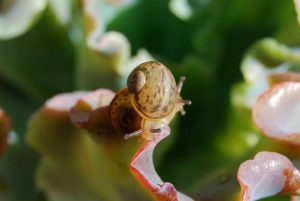 Different species have different reproductive strategies. Mine were hermaphrodites, meaning each snail had both male and female sexual organs at the same time. In a sexual encounter, they seemed to just decide ‘who would play which role’. The fertilized snail would later lay around 100 eggs a few inches underground (picture a tiny sea turtle nest). In about a month pea-sized, shelled babies would dig their way out! Delicate and fragile, shells so transparent you could see their hearts beating within, they had a certain way of catching the sunlight. I raised many such clutches, and consistently felt enamored watching these new lives explore the world. 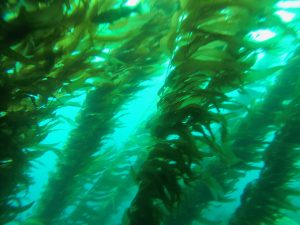 Through a series of fortunate events, I ended up in a parasite lab during undergrad. I quickly learned that snails were an integral part of parasite life cycles, and were in fact a huge component of my lab’s research. Trematodes are worms that need two to three hosts to complete their life cycle. The first host is a snail. Trematodes live in the snail’s gonad (great, right?) and clone themselves. The clones then swim out of the snail and seek the next host to penetrate. The worm eventually becomes a sexually-reproducing adult in the gut of a vertebrate (could be a bird, fish, or mammal). Its young will target a snail and start the cycle over again! 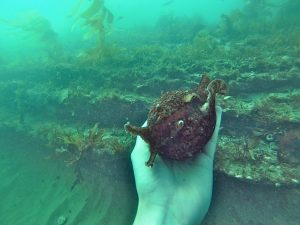 Encountering a California sea hare (Aplysia californica). Although big for a sea slug, this is just a little guy. The largest recorded Aplysia is 75cm and 7kg!
Photo by Lauren Dykman

As a scientific SCUBA diver, I investigated which snails act as hosts for trematodes in California kelp forests. This got me underwater a lot, figuring out the density and diversity of snails on the ocean floor, and processing a lot of my own samples back on shore. I eventually succeeded in a laboratory infection of a marine snail species with a trematode. The best moments, though, were during field work when I took a moment to hover over the ocean floor, watching gastropods living life in their sunny kelp forest home.

My lab also worked on trematode life cycles in the nearby Carpinteria Salt Marsh. A postdoc wanted to know how the density of California horn snail (Cerithideopsis californica) hosts influenced trematode infection rate. To this end, she kept snails caged in the middle of the marsh for three months at different densities, then collected them, color-coded by spray painting the shells, and released them back into the marsh. 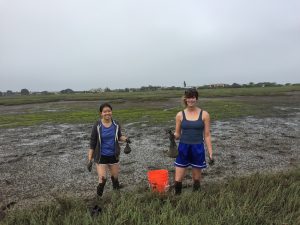 After a month or so, cue the team of undergraduate helpers. We got to slosh around knee deep in mud for a parasite-ridden-colored-snail hunt in a closed-off reserve. I was aware that I had basically found nirvana at the ripe old age of 22.

The trematodes in Carpinteria were seeking birds, not humans, as final hosts. Occasionally upon leaving a snail they would mistake a human leg for a bird leg and penetrate the skin. This causes the annoying but harmless rash called ‘swimmers itch’. In other wetlands, however, humans are not so lucky. One of the more applied projects my lab participated in was the biological control of Shistosoma species in Senegal. 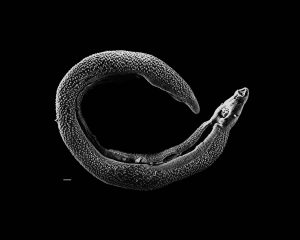 These parasites, closely related to the trematode causing swimmers itch, do target humans. They penetrate any person bathing in fresh water and cause pathology in the liver, intestine, or bladder. To reduce parasite burdens, my lab studies the effects of introducing prawns to rivers and ponds near towns. Prawns eat snails, snails are not there to shed parasites, presto! Safe swimming and bathing water. This work in Senegal is promising, as a similar project in Kenya greatly reduced infection rates in school children after the introduction of crayfish to nearby ponds.

In undergrad I completed a semester abroad in Costa Rica. For this tropical ecology and biodiversity course we were to design and conduct an independent project over four weeks. Leading up to the proposal, I spent days wandering the rainforest, brainstorming ideas. As usual I poked around for snails, and I ended up finding a surprising amount. Thus I had my inspiration: a diversity survey of terrestrial gastropods across three different cloud forest sites. 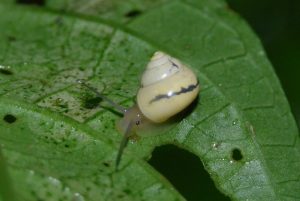 Helicina monteverdensis. Ranging in color from white to yellow, sometimes with a red dot on the shell.
Photo: Lauren Dykman

No one in my program had investigated snails before, so my advisors wondered if I’d find much. To the contrary, I found thirty distinct species. My favorite was Helicina monteverdensis, a yellow-shelled snail named after the town. I even found a predatory snail that hunts other snails!

There are 35,000 species of terrestrial gastropod worldwide. In addition to being successful and abundant players in land-based ecosystems, many species are quite regionally-constrained (they don’t travel far). This not only makes them ideal models for speciation and evolution, but also makes species especially vulnerable to habitat loss. Cataloguing the richness of terrestrial gastropods allows us to take inventory of what exists on Earth, an especially important endeavor since human activities continually extinguish habitat on massive scales. 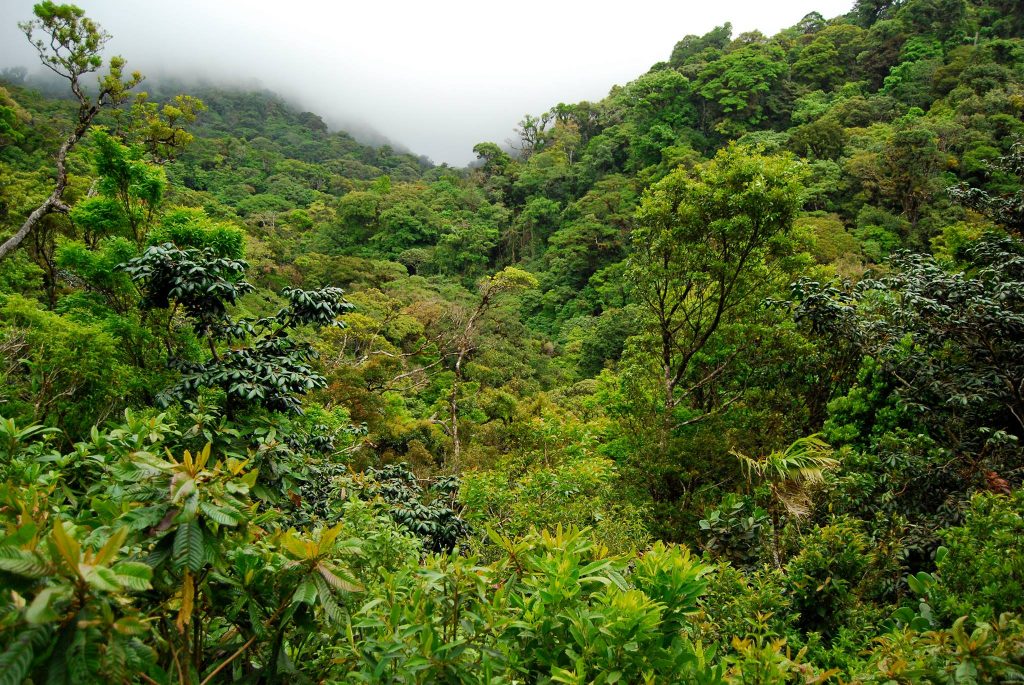 I now study deep sea hydrothermal vent ecosystems for my PhD at Woods Hole Oceanographic Institution. At our sites 2,500 meters below the surface, animals live in complete darkness, at pressures of 3,600 pounds per square inch, thriving off ecosystems based entirely on chemical energy from geothermal activity. Snails, as it turns out, are major representatives in these habitats. New species are discovered with every submersible dive, and how these animals interact in their mysterious world poses a challenging yet rewarding quest for scientists. Incredibly, even these habitats are not immune to human disturbance: we’ve already started mining hydrothermal vents in some parts of the world. Before such enterprise becomes widespread, my lab aims to understand the ecological function and regional connectivity of vent organisms to understand how they can recover from disturbance.

My scientific career has let me follow a childhood interest through misty tropical forests, among sunny kelp beds, through muddy salt marshes, to the very depths of the sea. This story is meant to encourage everyone to look closely at their passions; if you have an intuition that something is interesting, it probably is.

The world has so much deep and complicated beauty even in seemingly simple things, garden snails for instance. 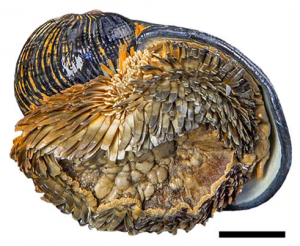 A scientist’s job is to recognize such beauty, follow it as far as it can take them, and truthfully communicate such splendor in any form they can. As any scientist can attest, the process of discovery is a surprising, humbling, and wild experience. 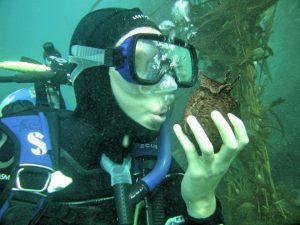