For more of Danielle’s writing, be sure to visit her writing website at https://www2.whoi.edu/staff/dfreeman/

By the time I was thirteen, my grandfather could no longer speak. He laughed sometimes, he gestured to things, he sometimes made noises of displeasure. But he was no longer capable of holding a conversation. The tragedy of dementia is always a tragedy, but our particular tragedy, my grandfather’s and mine, was that he lost his ability to speak just in time for me to be old enough to consciously want to have conversations with him, to want to ask him about the classes he used to teach and the labor organization work he had done, to want to tell him about the classes I was taking and the books I was reading.

We couldn’t have those conversations. But I do remember walking with my grandfather. I held his hand and we walked the stretch of beach along the Long Island Sound close to my grandparents’ home. We listened to the seagulls and the breathing in and out of the waves. I watched the sand beneath my feet, littered with slipper shells and the occasional horseshoe crab; or I watched my grandfather’s hand, so large around my own; or I watched the waves, tossing their offerings upon the shore. I was full of sorrow that had no remedy, sorrow for a man who I loved, and who I knew was dying. Feeling the cold wind that worked its way beneath our jackets, I thought we might as well be another few pieces of flotsam (or jetsam?) thrown onto the beach by the tide. I imagined that the tide would return for us; it would carry us both out to sea again, to somewhere else, somewhere unnamed and unknown. I found this idea comforting. In the face of a grief I could not explain or fight, it was comforting to hear the regular break of the waves on the shore. It was comforting to imagine that I could relinquish all pain and trust in the ocean to carry my grandfather and myself out of the situation we were in.

This was, of course, a fantasy. Yet the fantasy had ground in the hugeness of the ocean, in the regularity of the tides and the waves. I was struck by the sense that I was a small consciousness on a planet governed by larger powers. If the waves could take a rough, jagged rock and beat it smooth, surely it could do the same with my rough, jagged grief. I could trust that the ocean was larger and more powerful than me or any of the human forces in my life.

Studying oceanography has given me a very different appreciation of the ocean. The ocean I knew as a child was monolithic. It was mythologically powerful and had a singular personality. But the ocean I’ve come to know from oceanography classes and fieldwork is a crazy tangle of interacting systems, each of them fragilely balanced, each of them constantly moving. The oceanographer’s ocean is not monolithic; it is eclectic, diverse, and extreme in every way. It consists of so much more than we can see. There are waves crashing on shore, yes, but also the sunlit zone beneath the waves, where tiny life forms photosynthesize, and the darker regions beneath, which receive the detritus of the surface ocean. There is the salt taste of the water, yes, but also the dancing partnership of salinity and temperature that drives the circulation of water masses around the globe. There are the empty shells strewn on the beach, yes, but also the delicately poised carbonate system, which determines the pH of the ocean and makes possible the survival of organisms with carbonate-based shells. I grew up fascinated by the ocean because it was a powerful and constant force in my life; I remain fascinated by the ocean today because its complexity reveals it as both delicate and dynamic.

Why do I write about this? There’s an environmentalist thinker I like called Timothy Morton, who writes that thinking in an environmental (his preferred term is “ecological”) manner is not just about thinking about the environment, but thinking in ways that examine our feelings towards and our relationships with our environments. In his words, “[E]cology isn’t just about global warming, recycling, and solar power … it has to do with love, loss, despair, and compassion … It has to do with delight, beauty, ugliness, disgust, irony, and pain. It has to do with consciousness and awareness.” I write about this because I recognize that my original fascination with the ocean was based on incredible grief and a yearning to find an understanding of that grief in the nature of the world around me. I write about this because even though my understanding of what goes on beneath the waves is very different today than it was when I was thirteen, walking along a sandy beach still brings me back to my grandfather, and to the conversations we never had.

My grandfather died when I was thirteen. He grew up in Chicago, working in the family hardware store (which he did not enjoy). But we scattered his ashes in the water of the Long Island Sound, on the shores of the Connecticut town where he lived most of his life (and never gave up borderline-hoarder instincts of a kid who grew up in a hardware store). Today, if I could speak with my grandfather, the conversations I would have with him would be different than the ones I imagined when I was thirteen. Today I would talk to him about becoming a scientist, about the sparkling bioluminescence I saw during fieldwork in the North Atlantic, about the sensitivity of the carbonate system. I would talk to him about how I continue to love the ocean in new and different ways, and about how much more I’ve learned about what goes on beneath the waves. My grandfather was not a scientist, although my mom says he was sharply observant of the world around him, and was always the first to point out dolphins jumping from the waves, or migratory birds, or other wildlife. What I wish I could share with him is that, as a scientist, I feel a personal connection to the ocean, and that, rather than having a distancing effect, studying the ocean from a scientific perspective only enhances this connection. 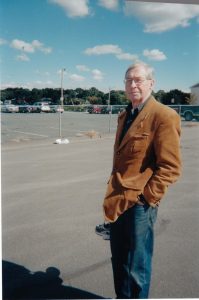 Not quite a picture of my grandfather at the beach. He’s standing in the parking lot just off the sand, having taken his shoes off for a walk.