Did you go on an apple picking trip, or otherwise gather your share of apples this fall? If so, you may be eating those well into the Winter. Apples are a sound economic choice for a harvest activity—unlike a pint of blueberries, typically, you can pick several pounds of apples and store them for weeks or even months for long-term enjoyment. Why is this so? It’s a mix of nature…and some genetic nurturing, in the form of selective breeding.

A recent article in Popular Science [1] last March took a look at the genetic differences between popular apple varieties, some of which have their roots in fruits that looked very different. Apple varieties range from ancient apples (said to be similar to crabapples) to today’s carefully curated assortment of apple varieties, most of which have been optimized for the best eating experience.

When we talk about genetic modification or selective breeding, many might think of modern GMOs and high-tech genetic editing techniques. However, humans have been selectively breeding plants like apples in low-tech ways for centuries – all one needs to create a brand new type of flowering plant is to nudge the pollen from one plant to the stigma (female plant part) of a flower of a different species. One example of this is the humble red delicious apple, which was created after humans selected apples with thick skin and bred them together for many years. This resulted in incredibly long shelf life – but also highlights important trade-offs in selective breeding. This is probably the variety we all were shown in school on Johnny Appleseed day or during kindergarten Thanksgiving, and is often the apple people are most opinionated about. The apple’s taste and texture don’t always seem fitting for its popularity, and in fact the “mealy” texture of red delicious apples was actually inadvertently selected for as part of gaining that incredible shelf life. You may notice that the sweetest, most delicious apples from your picking pilgrimage were also the ones that got mushy and spotty the fastest. This trade-off between taste and shelf life has been a major focus of apple breeders for generations.

Some of America’s earliest selective breeders were actually entrepreneurial homesteaders. One famous homesteader was the infamous Johnny Appleseed, who wasn’t the first from Europe to plant an apple orchard, even though he is often used as a symbol for America’s apple legacy [2]. What’s more, the story I heard (which you might have too) was that Johnny’s love of apples led him to spread apple seed gleefully throughout the New World…this isn’t exactly true. In the late 1700s (almost 200 years after the first apple orchard was planted in America), Johnny systematically looked out for where settlements were likely to be created, and planted apple seeds ahead of them as a way of blazing the trail for these new communities. But it wasn’t a selfless act: legally, if he planted 50 trees, he was able to gain ownership of the property via the Homestead Act and, later, to sell it off for a profit [3]. While the apples that Johnny planted weren’t eating apples (they were for hard cider), the fact that he planted so many was a substantial genetic boon to America’s apples, and is responsible for several of the varieties we know today. Because he planted so many, a lot of mixing between varieties happened by chance, and small changes in the genetic makeup of the strains occurred with exposure to environmental conditions, resulting in a more diverse and robust American apple stock. Although Johnny died a land baron with a large amount of orchards in his name, many of these were destroyed during the prohibition era [3]. Interestingly, the relatively recent resurgence of the popularity of hard cider is actually the first time it has been popular since Prohibition! 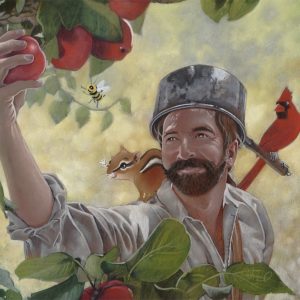 I came into this search expecting to find out that Johnny Appleseed didn’t look like this, after all, but it turns out he most likely did (Source: Patheos).

One example of apple grafting (the process of combining two strains of apples to form a new, hybrid strain) is the Granny Smith, one of the American gold standard apples. This strain came about when an unknown variety grafted, by chance, with a European variety of French crab apple (at least that’s our best guess) historians think were grown in Tasmania and used for baking, and the result was the unique Granny Smith apple [4]. There is some consensus among historians that there actually was a Granny with the last name Smith (named Maria Smith) [5]. She migrated from England to Australia, and there was married to a farmer [5]. Granny Smith was responsible for cultivating this new strain, but just how the chance encounter responsible for creating them played out is a bit more of a mystery. Some say that the two original strains mixed when Frenchmen tossed apples into the creek outside of her house, while others say that she was cooking with the French applies, tossing the seeds herself outside to mix with some variety already growing on their farm property. Granny Smith herself was responsible for making them popular; she brought in outside help to investigate the new seedling, and then worked hard to spread the variety worldwide [4]. 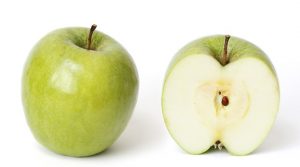 One apple variety that you might have spotted at a Massachusetts orchard this season is the Jonagold. Developed at Cornell, the Jonagold has been around since around the 1960s in market [6], but is actually more popular in Europe. The Jonagold was a direct cross between the Jonathan apple and the Golden Delicious, and tends to be relatively large apple, good for both baking and eating. A relic of the pre-genomics era, Jonagolds were created by brushing pollen from Jonathan apple trees onto red delicious flowers.

More recently, universities like Cornell have continued America’s tradition of apple breeding and cultivation in a more sophisticated way. By using advanced genetics approaches, such as examining methylated genes (a fingerprint of cells controlling their expression of various genes, indicating that the plant might have been turning some genes off and on for a particular reason, such as to guard against cold exposure) and inheritance (what genes a parent apple tree passes down to its seedling children) across apple generations, researchers are able to select for the best traits that lead to the delectable selection at the apple orchard…and the variety that makes apple picking so interesting. According to the University of Illinois, 2500 varieties of apples are grown just in the United States, with 7500 total varieties being grown throughout the world [7]. In the US, only 100 of these varieties are grown “commercially”, meaning that you’re likely to find them at a grocery store, and the varieties chosen for these distinctions are usually the ones that travel and keep the best.

Honeycrisp apples are the most sold apple variety in the United States [8] at 20.8% of all apples sold in 2018. Honeycrisp apples also ring up at the highest average price, which was up to $2.43 per pound on average at the beginning of this year [9]. It was developed by the University of Minnesota, and has only been on the market since about the 1990s [10]. Though it bruises easily, it is disease-resistant and relatively easy to grow. With their sweetness, you might think that Honeycrisp apples go bad more quickly, but even in conventional refrigeration, they last for 7 months, because they have been specifically bred with traits that lend good shelf life. In fact, for most varieties of apples sold commercially, they can be kept in storage for 10 months or more with the help of 1-methylcyclopropene, a blocker of ethylene gas (the ripening agent), which allows apples to evade inevitable spoilage (a combination of their long shelf life due to genetics and the special properties of the chemical) [11]. Although they have not been on the block long, Honeycrisps may soon be replaced by new varieties thanks to ever-improving genetic methods – the hype is that SnapDragon may eventually outcompete this strain [12]. With the help of some simple (and not-so-simple) science, the art of apple production has become sophisticated today. Because of the careful work of scientists and everyday homesteaders alike, apple picking is a variety-filled adventure, rather than a monochrome chore.