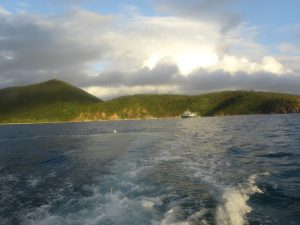 About the author: Genevieve Flaspohler is a PhD student in Electrical Engineering and Computer Science in the MIT-WHOI Joint program. She is a member of the WHOI Autonomous Robotics and Perception Laboratory (WARPLab) and researches machine learning and computer vision algorithms for autonomous underwater vehicles (AUVs). She is especially interested in using AUVs for improved exploration and monitoring of coral reef ecosystems.

On September 6th, 2018 Hurricane Irma hit the US Virgin Islands (USVI).  A little over two weeks later, on September 20th, Hurricane Maria made landfall on the already battered islands. These two Category 5 storms were the worst to hit the region since Hurricane Hugo in 1989 and had a devastating human and ecological impact on the area. In mid-November after the storms, Dr. Joel Llopiz and I headed there to study the storm’s impact on the coral reef ecosystems of St. John’s island, USVI as part of an NSF Rapid Response Grant. 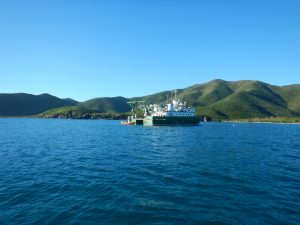 Our WHOI-based team, including me, the Llopiz Lab, the Apprill Lab and the Mooney Lab, has been studying the reef ecosystems on St. John’s for several years. Most recently, in springtime earlier that year, the team deployed 14 underwater microphones (i.e. hydrophones) to record the reef’s sounds. If you placed microphones in a bustling city, you would expect to hear a certain sound-signature. For example, in Boston, you might get lots of angry honking and irate pedestrians. Similarly, a healthy coral reef has a specific sound-signature. One of the goals of this research was to deploy 14 hydrophones for 6-8 months at different reef sites to develop baseline sound-signatures for different kinds of reefs. The 14 deployed hydrophones were six months into their deployment, diligently sampling the acoustic sound-signature of the reefs and storing the one-minute sound bytes into their on-board memory, when the two monster storms hit.

Our team’s mission was simple: recover the 14 hydrophones. The hydrophones had potentially recorded the progress and aftermath of two large hurricane systems. If the data survived, it would offer invaluable insight into the effect of hurricanes on reef ecosystems. However, the only way to recover the data was to send human divers down to the seafloor, cut the recorders loose from their rebar attachment, and bring the devices back to lab. This seemingly simple task was complicated by the fact the hydrophones had just faced two Category 5 hurricanes, and there was no guarantee that any of the devices would be where they had been installed six months earlier. The stage was set: two scientists on a search for fourteen needles in a mile-wide haystack under 30-50 feet of water.

One of the hydrophones that survived the hurricane. We recovered the device from the seafloor (left) and brought it back to the ship for data offloading (right).

In the nine days after arriving on the island, Joel and I both logged more than 770 minutes underwater. The schedule for each day was simple. We woke up at 6 am, had breakfast on the ship and by 8 am we were suited up and on our small boat, the Black Tip, ready to dive. Setting out, we would start from the easternmost of our 14 dive sites and proceed westward. At each site, we drove the boat to the GPS point marking the deployment location of a hydrophone. Once we were lined up on the surface, Joel and I would dive in and start our descent, searching the seafloor for any sign of a hydrophone. For 3 of the 14 sites we got lucky: the device was right where it should be, it had been left untouched by the hurricanes. At these sites, we clipped the recorder off its rebar attachment and returned to the surface, victorious. For the other 11 sites, we were not so lucky. After reaching the bottom and ensuring that the hydrophone was nowhere to be seen, Joel and I would begin to circle out, trying to follow the action of the waves or search for crevices in which the device could have gotten lodged. We would continue to circle outwards, searching, until we ran out of air 45-60 minutes later. Then we would return to the surface, move to the next dive site, and try again. 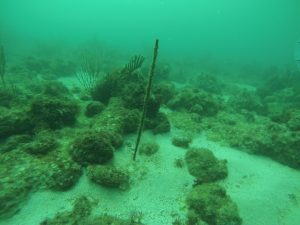 Many times, the hydrophones would slip off the rebar. The neutrally buoyant devices could then drift away. We found one of the devices washed up on shore and buried beneath some rubble, hundreds of yards away.

Our series of mainly unsuccessful searches would have been disheartening if not for the unbelievable beauty of the Caribbean reef surrounding us. Although we didn’t manage to find a hydrophone at many of the locations, we were motivated by daily sightings of lobsters, sea turtles, a manta ray, and hundreds beautiful reef fish and coral. Finally, after a few more lucky finds, we ended our nine days of searching with 7 of the 14 hydrophones, including one particularly gruesome recovery of a hydrophone that had been blown into a wastewater runoff area.

During the nine days we spent searching for the hydrophones, I almost forgotten that two massive hurricanes had recently battered the island. I hadn’t seen the reefs before the hurricanes hit and the storms’ impact underwater wasn’t as dramatic as I had expected. Although there were some signs of broken corals, many of the most delicate looking corals, such as the fan corals, remained upright and pristine, completely unperturbed by the worst that mother nature could throw at them.  This was my first time diving on a coral reef, and despite the storm, I was blown away by how alive and vibrant the reef community seemed. 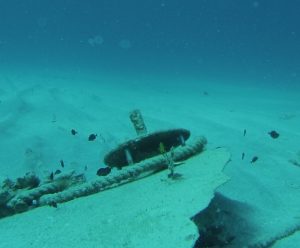 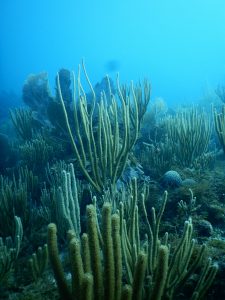 My dive partner, Joel Llopiz, had a different perspective. He had been diving these reef sites for years, and could see the storms’ damage more clearly. The hurricanes hadn’t impacted every species of coral equally: the delicate and flexible fan corals that I was so amazed by were mainly untouched. Some of the more rigid coral, however, were completely destroyed and many of the corals were being overgrown by macroalgae. As a fish ecologist, Joel was able to notice some additional worrying symptoms: certain species of fish seemed less prevalent in the post-hurricane reef, including some larger species that are signals of healthy reef ecosystems. Over the course of the trip, we took measurements and videos of the reef and are currently analyzing these data. After comparing the results with surveys from previous years, we will be better able to quantify the effect of Hurricanes Maria and Irma on the reef. 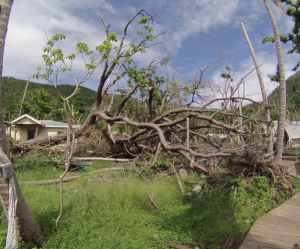 As a novice reef diver, I was unable to fully notice the effect of the hurricanes on the reefs. I was, however, equipped to notice the effects on land, where the destruction was heartbreaking. One of our collaborators, who lives on the island with his wife, played us the tense recordings from the local radio station in the moments before the storm.  They described the hours waiting in their boarded-up house for the storm to hit, the nerve-wracking time during the storm where all they could do was hope their roof would hold, and the days after the storm, which they spent picking up the pieces of their life and feeling lucky to have survived. And then, unbelievably, they heard on the radio that yet another storm was coming and had to start the process all over again.

Their story replayed in my head as we left the ship and drove to the airport, passing by boats that had been blown miles from the sea, telephone poles that had been ripped from the ground, and houses without walls or roofs. Joel and I visited the UVSI two months after the storms made landfall, and yet most of the island still didn’t have power or running water. Despite this, the people of the USVI are continuing to live and trying to put their lives back together, demonstrating enormous resilience and perseverance, even as the reef ecosystems that surround them struggle to do the same.