Biological systems are constantly shifting as they react to perturbations from outside forces. Natural disturbance is a powerful driver of species distribution in both terrestrial and marine ecosystems. Humans, however, are causing an unprecedented increase in the frequency and intensity of disturbance to habitat, which raises several urgent questions. How much disturbance can a natural system withstand before it degrades? What factors determine how fast a system can recover? And what stressors will push a natural system to a “tipping point” from which it will never return?

These questions are central to the concept of ecological resilience, coined in 1973 by Crawford Stanley Holling1. Despite its increasing popularity in conservation policy, resilience is a difficult concept to measure and define. The resilience of a biological community (groups of species living together) is influenced by the health of individuals and populations, the quality and configuration of habitat, and the severity of disturbance. My path to studying disturbance, recovery, and resilience has been indirect, and has taken me from coastal scrubland to the depths of the ocean. It is my fascination for these processes that ultimately led me to pursue a PhD in the MIT/WHOI Joint Program in Oceanography. In this program, I study how disturbance impacts biological communities, how they recover, and what factors contribute to their persistence. In this pursuit, I have not only learned invaluable lessons about the resilience of life, but also been inspired by life’s awesome capacity to persist and recover. 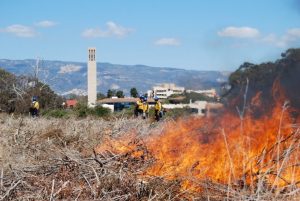 Many unique habitats have suffered substantial loss and fragmentation due to human development. This leaves small, scattered patches supporting isolated populations. For example, 99% of native grassland and 90% of native marshland in California have been converted to agriculture, invaded, or developed. When habitat becomes too small, populations can shrink low enough that they risk local extinction. Even when a species dies out in a habitat patch, it can persist regionally in a mosaic of other patches. If patches are close enough together, individuals can disperse between them to re-populate places where the species died out. It is when patches become too small or too isolated – for example when humans destroy or fragment natural space – that species risk global extinction.My interest in disturbance and recovery was sparked in a dry field on the coast of Santa Barbara, California. On a crisp, windless day, I stood in the center of a half acre piled high with dead brush, surveying the evenness of the piles, restlessly moving branches around for a perfect spread. Over the summer, with the Cheadle Center for Biodiversity and Ecological Restoration (CCBER), my co-workers and I had gathered this brush for a controlled burn. The goal: to exterminate an invasive grass called ripgut brome that had out-competed native species and come to dominate much of California’s scrubland and grassland. This invasive plant had rugged seeds – to destroy them, we would need to heat the soil to more than 300°F for three hours. After the burn, our field would be a blank slate, ready to accept the diverse assemblage of native plants that historically blanketed this land. When a troop of thirty firefighters marched up the hillside, we realized the moment had finally arrived. 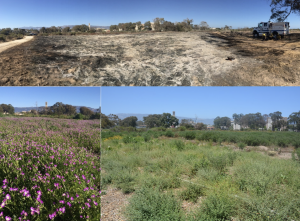 With ecological restoration, our goal was to create new, high-quality habitat patches as refuges for threatened native species. With interventions such as burns and weeding, we applied purposeful disturbance based on scientific evidence. Graduate students used burn plots to understand which management practices (e.g., combinations of burning, seeding, and weeding) lead to the success of restoration projects. We also monitored the growth and change of the plant community over time to evaluate progress and direct future efforts. Our research showed that continued maintenance is crucial for the success of a restoration project. Often, once humans tip a biological community into an undesired state (the field of invasive grass, for example), that state can prove highly resilient. Think about the bromus grass: it was difficult to kill, grew like gangbusters, and continued to colonize from adjacent fields for years. Regaining a native community, once destroyed, takes time, labor, and consistent funding, all of which restoration teams often lack. Regardless, given the right nudge, the native community grew and asserted its dominance.

Witnessing the transformation was its own reward. That year, the field went from charred wasteland, to a blanket of supple greenery, to a colorful burst of wildflowers. A progression of buckwheat, lupines, sages, poppies, and sunflowers followed. Above the mature bushes circled insects and birds, while foxes, rabbits, and snakes took up residence below. Participating in the transformation of a habitat patch from a monoculture of invasive grass to a diverse community was equally transformative for me. It demonstrated the ability of humans to reverse harm through purposeful management, and the power of living systems to rebound from degradation. I became curious about the resilience of other biological communities to different types of disturbance. I never expected my curiosities would lead me into the depths of the ocean.

Disturbance in the Deep

Hydrothermal vents are oases of life in the deep sea, centered around hot springs where plates of the earth’s crust spread apart. Some of the species that live there are disarmingly familiar – crabs, anemones, snails, and barnacles, just like in tidal pools. Others are outlandish – meter-long, red-plumed tubeworms with no mouths and no guts that obtain all their nutrients from bacteria sheltered in a special organ. Food chains in these communities are ultimately based on chemical energy from the vents, not sunlight like most ecosystems familiar to us. Such discoveries have broadened our perspective on productivity in the deep sea and the bounds of life on earth. Yet I was drawn to study hydrothermal vents for my PhD for another reason: vent communities, due to their association with volcanic activity, are naturally disturbed by volcanic eruptions. These can be rather frequent and intense: in some regions, large underwater eruptions occur every decade, with lava flows completely smothering tens of square kilometers of seafloor2. Moreover, vent habitat is patchy, and many vent species are not very mobile – think of slow snails and sedentary barnacles. So, when the life at one vent gets destroyed, how do animals recolonize? How does a diverse vent community reassemble?

Tubeworms at vents on the East Pacific Rise. Their tubes form structure that acts as a home for many other creatures. Images: Ridge 2000 (left); S. Beaulieu. Copyright Woods Hole Oceanographic Institution (right).

Marine invertebrates solve this problem by having a life stage called a larva. Larvae are unbelievably different in appearance and behavior than their adult forms. Think about the differences between a caterpillar and a butterfly. The larvae of most marine invertebrates are tiny, like a grain of sand, and live as plankton in the water column rather than on the seafloor. It is as larvae that immobile invertebrates, such as barnacles and tubeworms, disperse their offspring to new locations, providing insurance against local catastrophes like eruptions3. 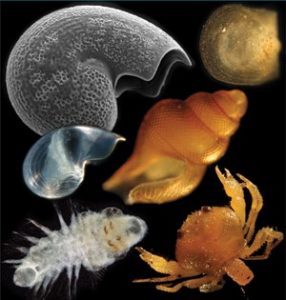 Larvae of hydrothermal vent animals. Photos are magnified – many of these larvae are less than a millimeter in length! Image: Photographic Identification Guide to Larvae at Hydrothermal Vents in the Eastern Pacific

The supply of larvae from one site to another, known as “connectivity,” makes populations more resilient and is important to consider when planning marine reserves. For example, because human disturbance is reduced or eliminated in reserves, populations grow larger and often become more resilient to other stressors such as climate change and hypoxia4. Thus, by weathering stressful conditions, critters in reserves live to supply offspring to surrounding, damaged areas. In patchy, dynamic habitats like vents, the survival of species depends on the colonization of disturbed sites by larvae from afar, which in turn depends on the size and spacing of habitat and the frequency of disturbance. Understanding these dependencies has become particularly urgent, because all too soon eruptions will not be the only catastrophic disturbance impacting life at vents.

Deep-seabed mining at vents for their rich mineral deposits is currently being explored by several countries, and demonstrations have already commenced in the Okinawa trough. But, as we push exploitation into increasingly remote environments, what is our potential to destroy life before even beginning to understand it? Originally, scientists hypothesized vent life might have evolved to tolerate frequent disturbance. However, long-term studies by my lab at Woods Hole Oceanographic Institution indicate vent communities take much longer to recover maximum diversity and function than previously estimated. Because vent habitat has a total area of only 50 km2 worldwide (that’s only 1% of the size of Yellowstone National Park!5) and is home to species that can’t live anywhere else, any additional disturbance or habitat loss could quickly cause species to go extinct. 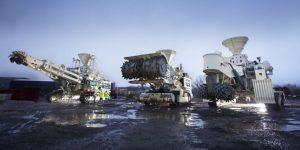 A Powerful Capacity for Recovery

Human impacts to the world’s oceans are garnering widespread concern. Trawling, seabed mining, dredging, and coastal development directly damage the seafloor. Additional stressors, such as climate change, acidification, pollution, and hypoxia decrease the potential for communities to recover. Such lists of harm usually inspire pessimism, especially given that multiple stressors often work together to decrease ecosystem resilience. The hopeful side, as I have witnessed more and more during my research, is that biological communities have a tremendous capacity for recovery. Through actions such as restoration and designing protected areas that enhance connectivity, we are already demonstrating a functional understanding of the consequences of, and solutions to, our impacts.

While I do not take our situation lightly – as a scientist in the 21st century, I am well aware of the magnitude of human-caused destruction – I also realize we have strong incentive and capacity to unite globally to combat habitat loss. The resilience of human communities hinges on healthy, functional biological communities. From regulating Earth’s climate, to buffering coastal developments from extreme weather events, to providing sustenance, to sustaining cultural and mental health, diverse ecosystems benefit human societies immensely. Ecological resilience is a relatively new concept, and we are just learning how to define, study, and promote it. Yet the strength of this concept is that it encourages thinking about biological systems as the complex, dynamic networks they are. Perhaps most significantly, in an era permeated by environmental pessimism, resilience is one ecological concept that carries a ring of hope. The very word promises that researchers are not documenting destruction or decline, but instead witnessing a powerful capacity for recovery.