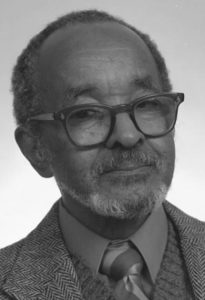 Emmett Chappelle was born in October 1925 in Phoenix, Arizona when it was still a small agricultural city; (consider: Arizona before widespread air conditioning). Not a stranger to segregation, Chappelle attended primary school in an all-black 1-room schoolhouse, then high school at an all-black Phoenix public school, where he was top of his class when he graduated in 1942. He was then drafted to serve in the segregated 92nd Infantry Division and was wounded twice during the Italian Campaign.

After the war, Chappelle attended Phoenix College and received an Associate’s Degree in electrical engineering, and then University of California Berkeley (funded by the GI Bill), where he received a Bachelor’s of Science in biology in 1950. He taught biochemistry at Meharry Medical College for several years, during which he began research into iron recycling by red blood cells and anaphylactic shock. These studies got him noticed by the biochemical community, and he received several offers from prominent schools to complete his graduate studies. Chappelle completed his Master’s Degree at the University of Washington in 1954, and he worked towards a Ph.D. at Stanford University for 4 years, until he left to accept a research position at the Research Institute for Advanced Studies in Maryland.

During his master’s and Ph.D. studies, Chappelle made several important contributions to our understanding of proteins and their building-blocks, amino acids, including how humans convert one amino acid into another. But it was at the Research Institute for Advanced Studies and later positions where he made his most influential discoveries and inventions. Chappelle began his work at the Research Institute of Advanced Studies in 1958, just one year after the launch of the Soviet Satellite Sputnik and the height of the Space Race, when federal funds were pouring into Aerospace research and development for the American space program. Chappelle’s research focused ensuring safe, breathable air for astronauts, and he found that launching plants into space with astronauts can minimize a spacecraft’s risk of poisoning its astronauts with carbon monoxide. 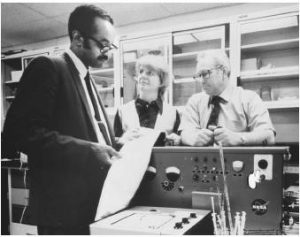 In 1963, Chappelle was hired by Hazleton Laboratories in Virginia, which held contracts with NASA. There, he studied how we could detect life on other planets like Mars by studying extraterrestrial soils for microbial life. To do this, Chappelle invented an important assay that scientists still use today – the ATP fluorescent assay. This laboratory tool uses detects living cells using the same proteins that fireflies make to glow, and it continues to be used by researchers around the world.

Here’s how Chappelle’s test for extraterrestrial life works: to be bioluminescent (life that creates its own light) fireflies make two chemicals, luciferin and luciferase, named after the root word Lucifer- which means “bringer of light”. When combined, these chemicals will produce light as long as there is also Adenosine triphosphate (ATP) present. ATP is a chemical that acts as the currency for all living organisms and provides chemical energy for reactions like bioluminescence within a cell. If the cell is alive, ATP will be present and would glow in this assay. Chappelle tested for living cells in terrestrial soils by adding luciferin and luciferase to samples and measuring how much light was produced. If there was life, the cells glowed. 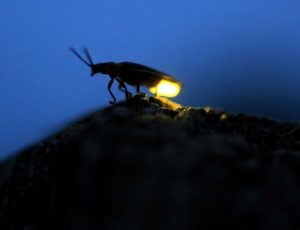 Chappelle did not discover life on Mars since no Martian soil has ever been brought back to Earth to test, but his assay is still used here on Earth to detect and study microbial life. In 1966, Chappelle was hired by NASA to work at the Goddard Space Flight Center, where he continued his research into the applications of fluorescence and bioluminescence. The uses he found for his fluorescent tests were incredibly varied; he developed way to measure crop stress in agricultural fields using lasers, and medicinal tests to detect bacterial infections in blood and urine.

Emmett Chappelle’s contributions to science are far-reaching, advancing fields including biomedical science, astrobiology, remote sensing and genetics. In 1994, Chappelle was awarded NASA’s Exceptional Scientific Achievement Medal. When he retired from NASA in 2001, Chappelle held 14 patents, mostly relating to fluorescence tests, and in 2007 he was inducted into the National Inventor’s Hall of Fame for his work on fluorescence in organisms. Chappelle passed away 4 months ago in October 2019 at the age of 93. Chappelle’s legacy lives on in the huge variety and specificity of today’s fluorescent assays, most of which still use firefly luciferin and luciferase. These include fluorescent tags that will bind to DNA and glow only when a certain gene is present, and fluorescent cancer cells that allow medical researchers to better “see” cancer in mice. 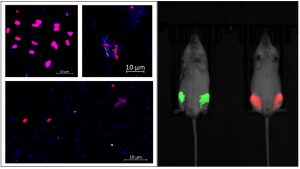 Left: Microbes from a freshwater lake that fluoresce when they possess a gene for metabolizing methane. Image credit: Brenna Boehman, Sina Schorn, and Jana Milucka, generated at the Max Planck Institute for Marine Microbiology in Bremen. Right: Two mice with tumors that are illuminated with luciferases to allow scientists to better visualize the cancer cells. Image credit: Cassie Stowe. Original image source: https://elifesciences.org/digests/45801/lighting-up-cancer-cells-in-a-mouse