The name Daniel Pauly evokes deep respect for anyone currently studying fisheries oceanography or fisheries management. Fish biologists all over the world are indebted to his pioneering work on establishing FishBase, an online database of information on fish identification, morphology, and habitat range. Over his career, Pauly revolutionized the way that fisheries science is done and has been an advocate of sustainable fisheries management, notably in the tropics. He is a prolific scientist and writer — the full list of his publications is 61 pages long! He has been recognized with many awards from organizations across the world, including induction as a Fellow of both AAAS and the American Fisheries Society. His most recent award, in 2019, was the “Great Supervisor” award from the University of British Columbia (UBC). Because of his extensive work on tools like FishBase and the models EcoPath and ELEFAN, his Google Scholar citation count is astronomical. Currently a professor at the UBC, and the Principal Investigator on the Sea Around Us Project, Pauly has had a major influence on fisheries science and fisheries scientists for at least three decades, on at least four continents. The more I learn about him, the more I am in awe of his accomplishments and contributions. 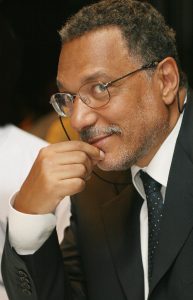 Daniel Pauly was born in Paris, France, in 1946, and grew up in Switzerland. As a teenager, he earned a scholarship to attend the University of Kiel in Germany. He earned an MSc and a PhD, both in the area of Fisheries Biology, under the advising of Gotthilf Hempel. After completing his doctoral work in 1979, Pauly joined the International Center for Living Aquatic Resources Management (ICLARM), in Manila, Philippines as a postdoctoral fellow. Over the next 15 years, he rose through the ranks at ICLARM until he became a Division Director. In 1994, he joined the faculty at the UBC , where he soon gained leadership positions including as head of the Sea Around Us Project (since 1999) and as Director of the Fisheries Centre from 2003-2008.

His most highly cited paper, published in Science in 1994, is titled “Fishing down marine food webs.” This paper compiled trophic level data on 220 species from 60 published studies that used the Ecopath software (also developed by Pauly, more on that later). This data was combined with landings data from the Food and Agriculture Organization (FAO), to determine the time series of mean trophic level of fisheries landings. The results show a clear decline in trophic level of landings, and highlight issues related to overall fisheries catch and discarding of bycatch. The paper also foreshadows ecosystem instability due to trophic shifts, and an emerging need for large-scale marine protected areas.

Not only has Pauly been a lead author on this and other paradigm-shifting papers, but he has also been involved in the development of extremely important methods, models, and databases that benefit fish biologists and fisheries scientists across the world. In 1981, his pioneering work on using length frequency data to estimate growth parameters was published as a coding tool in BASIC. That tool is called ELEFAN for Electronic LEngth Frequency ANalysis, and it has since been translated into a variety of programming languages, including R. This statistical tool takes in simple data on length frequency, or in other words the number of times that a fish of a given size is caught by fishers, and estimates how quickly fish grow on an annual basis. This information is critical for stock assessment models, which often guide management decisions like setting a total allowable catch.

In 1987, he conceived and began work on an even more significant contribution to open and accessible science: FishBase. Daniel Pauly and his colleague, Rainer Froese, saw the speed with which computer and software technology were advancing. So, they joined the fray to aggregate and disseminate species identification and population dynamics data for important fishes. Initially, FishBase was available on a CD-ROM, but it is now hosted online and incorporates new data on any species of fish as available. For free, users can look up the name of a fish and learn about its classification, habitat, distribution, life cycle, length at maturity, as well as lots of other biological information and links to additional resources. You can read more about FishBase in the introduction to Pauly and Froese’s book, available for free here. In addition to the expected users like fisheries scientists, managers, physiologists, and fishers, the website has also become an invaluable resource to undergraduate students, teachers, and even translators who are looking for the common name of a given fish in other languages.

Around this same time, Pauly was involved in developing software for Ecopath with a colleague at ICLARM. Ecopath is a model for estimating the mass-balance of an ecosystem, including trophic linkages. In other words, this model represents all the organisms in a food web as units of mass (usually as carbon or nitrogen), and tracks how that mass moves through the ecosystem when they eat each other. In a way, it is an early tool for ecosystem-based management. Since Pauly’s first co-authorship on a peer-reviewed paper about Ecopath in 1994, the model has been expanded and translated into multiple programming languages. As of January, 2018, the latest version of the software, Ecopath with Ecosim (EwE), was being used by 8000 people in 170 countries, and had been listed as one of NOAA’s top ten scientific breakthroughs in the last 200 years.

All three of these projects that Pauly pioneered (ELEFAN, FishBase, and Ecopath) have two very important things in common: (1) they pushed the field of fisheries science into the information age at the earliest possible time; and (2) they were developed with a visionary commitment to open-access data and software. The combination of these two attributes has contributed to Pauly’s legacy as a champion for sustainable development and sustainable fisheries management, particularly in less-developed and tropical countries.

Since 1999, Daniel Pauly has been the lead scientist on the Sea Around Us Project. This project was named in honor of the eminent scientist and science writer Rachel Carson, using the title of one of her books. Their goal is to “provide Asian and African countries with more accurate and comprehensive fisheries data.” They make catch data available in a number of formats (by weight, by value, by gear, etc.) and they emphasize global data that is broken down by Exclusive Economic Zones (EEZs), Large Marine Ecosystems (LMEs), and High Seas sectors. Much of the data is available for free through their website, as well as published in peer-reviewed journals. This project seems like a wonderful culmination of Pauly’s career: wielding his expertise and innovation to design open-access fisheries data products for developing nations in Africa and Asia.