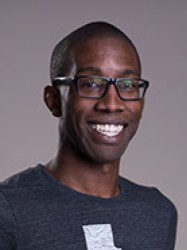 I first met Professor Chris Jackson last summer at the WHOI Steinbach Departmental Lecture for Geology and Geophysics. I had just arrived at Woods Hole for graduate school two days prior and his talk was the first seminar I attended as a graduate student. Enthusiasm and energy emanated from his discussion of seismic reflection data and its utility in the field of marine geology. His style of presenting and answering questions was so engaging and charismatic that, for the first time, I raised my hand during the Q&A. I can’t remember the specific question now, but what I do remember is Jackson’s lecture that day being a turning point that encouraged me to engage with speakers in a more active way.

Long before Professor Jackson came to Woods Hole, he began his own scientific career at the University of Manchester. After earning a bachelor’s degree in geology in 1998, he stayed to complete a doctorate with Rob Gawthorpe on the stratigraphic evolution of rift basins. Rift basins are key examples of extensional tectonic activity, where the lithosphere is being pulled apart, and Jackson’s thesis research improved our understanding of how these rifts evolve over time (Jackson C. L. 2002). Upon graduating, Jackson worked as an industry research geologist in Norway for two years before returning to academia at a position in Imperial College London, where he’s been ever since. Though he’s permanently been in London for more than a decade, Professor Jackson has kept himself well connected as a visiting scholar in both the United States and Namibia.

Jackson’s research has broadly centered around understanding various geological processes and phenomena that occur in sedimentary basins. He has published works on everything from fault evolution and magma flow to sediment transport and deposition. To this end, the oceanographic community’s understanding of marine geological processes has greatly benefited from his work.  For example, in 2015, Jackson and others from Imperial College London published an extensive review paper quantifying and describing clinoforms- shallow-marine depositional features found globally along continental margins (Faulkner et al. 2010). The work has since been cited over one hundred times by peer articles in geology.

Currently, Jackson’s research has focused on understanding how faults in sedimentary basins evolve over time. The geophysics community is uncertain whether a propagating fault model or constant length fault model best describe the evolution of normal faults. Jackson and others presented data which suggest that the propagating fault model characterizes initial growth while the constant length model is more useful for describing the fault later in its lifespan (Patruno et al. 2015).

He is perhaps best known in the geological community for utilizing  three-dimensional (3D) seismic reflection data. Seismic reflection is a method of “imaging” the Earth’s subsurface using reflected seismic waves, similar to how bats use echolocation. It can generate extremely high-resolution images of subsurface geological features that would be impossible to detect through traditional exploration. Jackson received the Bigsby Medal from the Geological Society of London in 2013. At the awards ceremony, a representative of the Society remarked that Jackson is the “leading and most productive interpreter of three-dimensional seismic reflection data of his generation.”

In addition to being a productive scholar in the field of marine geology and geophysics, Jackson has been a staunch advocate for improvements to the journal review process. A key contributor and advocate for EarthArXiv, Jackson is among the growing body of scientists who believe that faster, more objective peer reviewing involves community input through preprinting. Preprinting is a process that allows scientists from around the world to share their research digitally while still in the publication process. Instead of relying solely on a small panel of anonymous peer reviewers to determine the quality of your research, preprinting platforms like EarthArXiv allow for more open-mindedness and accessibility of research with the general public.

As a visiting Steinbach Scholar, Jackson participated in a Q&A luncheon specifically for the graduate students in the Joint Program; it was here that I developed an appreciation for his personal perspectives on success, academia, and work-life balance as a scientist. It was refreshing to hear someone who has succeeded in the current academic system present well-defined critiques of it. Chris Jackson is someone who deserves recognition not only for his scholarly contributions to marine geology but also his efforts in transforming the culture of scientific research as a whole.