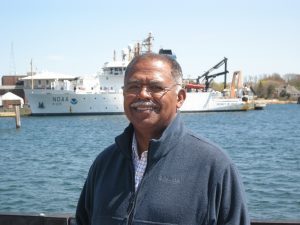 Dr. Ambrose Jearld Jr. touts a career as both a fisheries biologist and an administrator with the Northeast Fisheries Science Center in Woods Hole. In these roles, Dr. Jearld made significant contributions to ocean science, both in our understanding and collection of fisheries biology data and the promotion of diversity and inclusion. The latter of these two tasks is one Jearld remains active in at both a local and national level to this day.

Dr. Jearld earned both his graduate degrees at Oklahoma State University, where he focused on channel catfish during the course of his Master of Science and the biology and behavior of gouramis for his Doctor of Philosophy. After working as a professor at Howard University in Washington, D.C and at Lincoln University in Pennsylvania, Dr. Ambrose Jearld began at the Northeast Fisheries Science Center in Woods Hole, MA. Here, he went on to serve as Chief of the Fishery Biology Investigation group at the NEFSC (now the Fishery Biology Program). This group is tasked with acquiring biological information required to assess the populations and stocks of important fishery resources. The scope of this group includes determining mortality rates, timing of maturity, growth and fecundity (reproductive) parameters, fish behavior, and age determination. That final task resulted in one of the most well-known products of this group and one Dr. Jearld remained intimately involved with, amassing a database of up to 50,000 fish and shellfish ages each year (samples largely originating from NEFSC surveys) to provide a robust data set of age composition for many species. These taxa include some of the most iconic fish and shellfish of the Northeast such as Atlantic cod, haddock, Atlantic herring, and ocean quahogs. Dr. Jearld also contributed to a number of studies describing the appropriate techniques for ageing these fishes and shellfishes. These techniques included optical Fourier transform characterizations of fish scales and microstructure analysis of ocean quahog shells to define annual growth lines. His expertise in fisheries age determination is further exemplified in his authoring of the Age Determination chapter of Fishery Techniques, an oft cited reference for fisheries scientists.

After serving as Chief of the Fishery Biology Investigation group, Jearld served as Chief of the Research Planning and Evaluation Section and later Chief of Research Planning and Coordination Staff. Dr. Jearld then transitioned to the role of Director of Academic Programs at the NEFSC. As Director of Academic Programs, Dr. Jearld became a leading advocate for improving diversity and inclusion both within the National Oceanic and Atmospheric Administration and for the larger marine science community. One of the major foci of these efforts is to reduce the gap between representation in oceanography at the graduate through faculty level, and the larger demographic composition of the United States. While he retired from the NEFSC in 2016, Dr. Jearld continues to be involved in efforts and discussions to improve diversity and inclusion across fisheries and ocean sciences, participating in and leading workshops on this topic at annual American Geophysical Union and Ocean Sciences meetings. Locally, Dr. Jearld has chaired the Woods Hole Diversity Action Committee—a group which advises the six Woods Hole Science institutions on diversity issues—chaired and co-founded the Woods Hole Black History Month Committee, and served as director of the Woods Hole Partnership in Education Program. The Partnership Education Program (PEP) is designed to address the underrepresentation of Blacks, Hispanics, Indigenous Americans and Asian Americans in oceanography—an important and pervasive issue in ocean science. PEP brings students from these underrepresented groups into labs, giving them important connections into what can be an otherwise insular culture. Since its inception, the PEP program has brought 168 students to Woods Hole, aiming to bring in 15 students per summer. The Woods Hole Diversity Advisory Committee, Woods Hole Black History Month Committee, and the Woods Hole Partnership in Education Program remain active today and are at the forefront of the diversity and inclusion efforts in Woods Hole. Flagship events by these groups include the Harambee Festival at the end of February, annual Juneteenth celebrations, and community listening events.

Owing to his substantial contributions to fishery science and leadership in improving the culture of the fishery science community, Dr. Jearld was named as a member of the inaugural class of American Fisheries Society Fellows in 2015. The American Fisheries Society is considered one of the leading sources of fisheries science and management information, so this recognition both cements and honors Dr. Jearld’s place as a leader in the field. Dr. Jearld also serves on the Leadership Counsel of the American Geophysical Union, was the president of the National Technical Association, and is a former member of the Massachusetts Maritime Academy Board of Trustees.

Upon Dr. Jearld’s retirement from the NEFSC, the Woods Hole scientific community honored Dr. Jearld with an annual lectureship in recognition of Jearld’s work on improving diversity and inclusion within the ocean sciences community. This lecture series was established in 2017 and since then, each lecture is held every summer around early July with the topics centering on diversity and inclusion. Speakers have included Dr. David J. Asai, Dr. Ashanti Johnson, and Dr. Warren Washington, with 2020’s speaker yet to be announced.

Dr. Jearld’s work and legacy regarding fishery science and diversity in ocean science can be seen in the Northeast US fishery field, but also in the national ocean science community at large. His continued efforts serve as an inspiring model for young scientists to advance their field both in research and workplace culture.