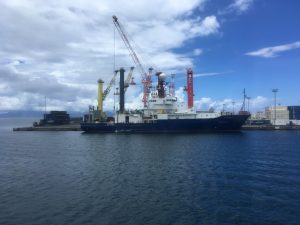 People have very different definitions of the word “cruise.” The non-oceanographer imagines a large cruise ship with water slides, a happy hour, cute beverages with little umbrellas in them, and a journey that takes 5-7 days before dropping you off in a tropical paradise without a care in the world. For the sea-going oceanographer, the experience is not so carefree: memories of 24 hours without sleep are at the forefront of the mind, long nights where your equipment just won’t work (why won’t it work???) are the norm, the only computer you brought on the cruise catches a rogue wave, and you just need to get off this ship but you still have THIRTY-ONE DAYS until you reach shore.

However, I’d like to be optimistic (at the risk of my advisor not thinking I’m being productive on cruises) and say going on a research cruise is a mix of work (and trust me, there is a LOT of it) and play. In between all the sleepless nights and missed meals are moments of genuine fun that remind me why I love the oceanographic community. This past fall, I spent 67 long (because what is sleep?) days at sea on the R/V Roger Revelle on a transect spanning the Pacific Ocean from the coast of Alaska down to Tahiti. When you’re at sea, you don’t have access to reliable internet, telephones, or cable television. You learn to make your own fun. Here are 10 creative ways people aboard our ship enjoyed themselves during our 2+ month stint at sea:

This was my first cruise where yoga was a daily scheduled activity, and it was even more unique that it was organized by our gruff captain. I am a huge proponent of exercising while at sea; yes, it’s important for your physical health, but I find that it elevates my mental well-being as well. I thoroughly enjoyed our yoga sessions, despite that fact that I had never done yoga before and doing yoga on a constantly rocking ship was like starting on “hard mode.” By the end of the ten weeks, we were even doing inversions. For non-yogis, inversions are basically anything you do upside-down, like headstands. Although, due to my tall stature and novice yoga abilities, I did inflict a small dent upon the ceiling of the rec room.

I cannot stress enough how cultural norms on land really go out the window when you are at sea. This is really shown by a display of taking naps in incredibly public places. There is very little that can beat a back deck “cuddle puddle” with your friends on the deck boxes. These large, black containers perfectly adsorbed heat from the sun and made for great heated beds for us cat-people. Other popular public napping places included the ship’s library, which was directly adjoining the mess hall so that everyone could watch you sleep while they ate. Sometimes you would observe scientists taking naps right at their lab benches, with a loud alarm set so as not to miss their time points for their chemical analyses. One champion of the creative napping was Lydia, a former ballerina who could contort herself into the smallest of shapes and fit into the most creative of spaces (she is pictured below). 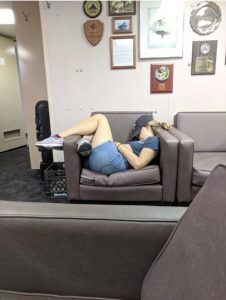 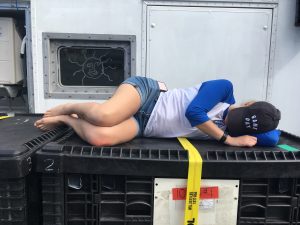 3. Playing cards and board games

I have been on cruises on many different ships, based out of many different countries, and there is always one thing that is a constant form of entertainment: cards and board games. You might be thinking that this sounds like a nice way to socialize and relax. You would be wrong. Sailors are fiercely competitive, and these games are an outlet for that. I cannot begin to count the (good-natured) shouting matches that occurred over a card game that took an unexpected turn, nor the number of cribbage rematches that were insistently played. At times the mess hall was completely full during meal off-hours, having turned into a mini-casino (minus all the actual vices that make casinos the American institutions that they are today).

My fondest memories of this cruise include sitting with other graduate students on the bow of the ship, underneath the light of the stars, singing songs into the black abyss. We passed many hours doing this, despite the fact that I almost never do this with friends on land. It was a very nonjudgmental space, and even the coyest singers among us let out a tune or two. We also had some talented guitarists on our ship, who attracted wandering souls like honeybees to a flower. 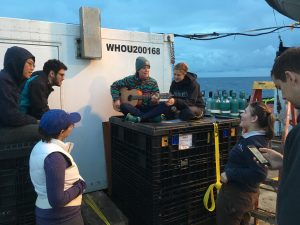 Colette serenades some weary grad students on the back deck.

5. Creating a home away from home in your cabin

When I found out that I was going to be a rooming with my good friend Colette for this cruise, I knew this was an opportunity to really jazz up our otherwise dull cabin. While we were readying the ship to leave out of Seattle, we took an opportunity to take a cab to Target, where we absolutely splurged on items for our cabin: comfy sheets, soft mood lighting, a vanilla scented plug-in, streamers, ribbons, etc. And our impulse buys paid off. Our cabin became the center of relaxation for us and others, where we could come for respite and pretend like we were not on a giant hunk of metal in the middle of the biggest body of water on Earth. 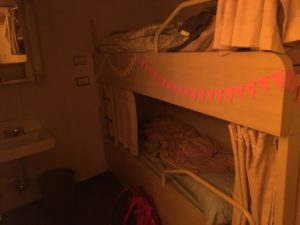 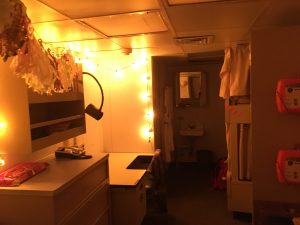 Our room, post-Target raid. Hopefully my mother doesn’t read this blog post and comment on my unkempt bed.

Making art for and with friends comes in a variety of ways. I brought my nice set of colored pencils to sea to draw by my lonesome. Other friends like to write tortured poetry or journal. Perhaps the most creative of artistic outlets came in the form of birthdays. Indeed, things get really silly during at-sea birthdays. This includes making paper crowns, blowing up lab gloves and drawing faces on them and pretending they were a good replacement for actual balloons, making ridiculous birthday cards, and crafting huge birthday posters.

Can you even say you spent 10 weeks at an ocean-based summer camp if you didn’t have a talent show to prove it? From singing, to acting, to swing dancing, to synchronized swimming (on the bow of the ship, thanks the ingenuity of some French cruise participants), to a corn hole competition, our talent show had the works. Was it weird? Yes. Was it a wonderfully fun time? Absolutely. The talent show was conveniently timed with our equator crossing, where we also all collected equator water in vials to keep as a trinket and received certificates to mark our seamanship. 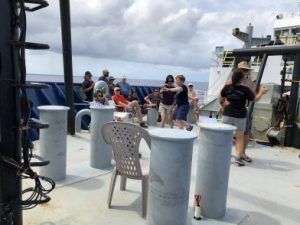 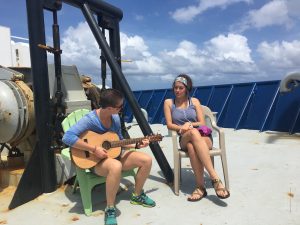 (left) The chief scientists lead the swing dancing party. (right) Colette and I perform a medley of songs under our folk band name, the Femmenauts.

8. Dressing up in weird outfits

Again, I reiterate that things that would normally not work on land really make a splash at sea. Dressing up in weird outfits was one of them. Another impulse buy by me and Colette included adult onesies—she was a unicorn and I was a dragon (pictured below). This was especially nice because in the cold waters off of Alaska, working in our fleece onesies really kept us warm (and fashionable) while we watched our comrades struggle in the cold. We also experienced Halloween while at sea, and I must say that there is some large gratification I feel watching a human-sized hot dog (also pictured) sample water from the CTD rosette. Other accessories included multiple princess crowns, rabbit ears, stick on mustaches, and more. 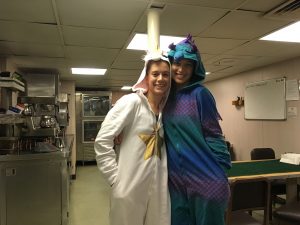 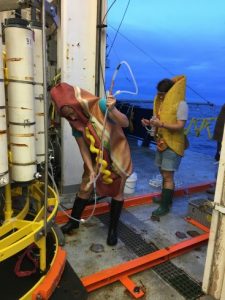 More often than not, we would have a deployment that would end in the middle of the night. This would begin our late night communion of “Cereal O’Clock,” in which many of us would gather to eat a bowl of cereal somewhere between the hours of 11pm and 4am. This was also a measure of the passage of time. Our sleep schedules were nonexistent, so we used daily rituals such as these to keep us on track. I also learned that one (unnamed) member of the science party fancied herself a bowl of cereal with ORANGE JUICE. Although at 2am, all of us in our fatigued and bored stupor were willing to try such a monstrosity. I have to admit– it was actually not that bad.  There was also a snack shelf, and I was notorious for always eating the last of the gummy bears in the middle of the night (we won’t talk about how much there was when I started). 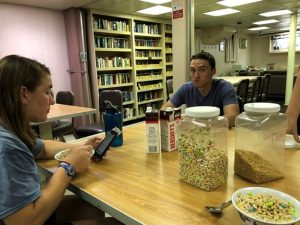 The ODF supertechs (which just means that they are super clean, and have to work extra hard) are caught off-guard during a late night Cereal O’Clock.

While definitely the most cliché activity on our cruise, sunsets were also the most popular. After dinner, every free body on the ship communed on the back deck to watch the spectacular light show. Sunsets became our place of worship, and offered us moments of reflection and community. I was most grateful for these moments, where 40+ people across different backgrounds and ages were able to just sit quietly in peace with one another, and remember why we were ever so inspired to go to sea in the first place. 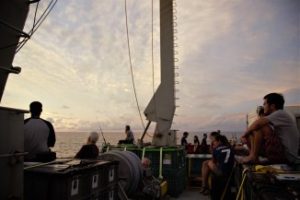 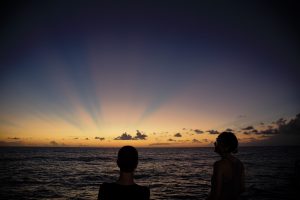 (Left) A sunset communion. (Right) An artsy sunset photo of Colette and I, ft. crepuscular rays.

BONUS. While not an activity that most of the science party takes part in, I did catch this Mahi Mahi while fishing: 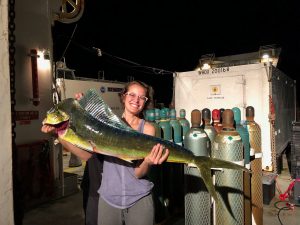