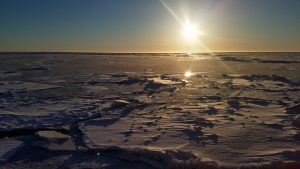 The science is clear. Climate change is happening, and it is critical that we act soon to prevent its worst effects. What’s less clear, however, is what we do about it. If you, like me, are easily overwhelmed by the news and are tied to long carbon-heavy plane or car rides to see your loved ones, sometimes that involves laying on the floor in a ball of stress.

We are constantly battling the feeling that there is nothing to be done about climate change. This is a dangerous and false mentality. While the biggest progress against climate change will come at institutional and policy levels (get involved in local divestment efforts and advocate for national and local climate policies!), this is not to say that our choices as consumers do not matter. Our first and foremost weapon against carbon emissions should be reduction if you are able: drive less, eat less red meat, take fewer plane rides, buy less high-energy products, etc. But what do you do when you find yourself no longer willing or able to give up your carbon consumption? One after-the-fact option is carbon offsets.

Carbon offsets are a way for individuals or businesses to fund projects that remove carbon from the air – essentially paying to alleviate some of your carbon footprint. Often, we imagine that this means planting trees or the prevention of deforestation, but recently many of these programs have expanded to fund non-forestry related projects. For example, many projects reduce global carbon by funding fuel-switching, replacement of oil stoves, alternative energy sources, or methane gas capture.

In addition to being a way to reach carbon neutrality, offsets can also provide social good. Often, they can result in fuel-independence and a source of income to communities that would otherwise rely on the destruction of their natural resources. For example, a carbon offset project providing a family with a cheaper and more efficient way to cook and heat their home is not only reducing carbon emissions, but also giving them more financial independence. This is especially important for poor communities, which climate change is projected to disproportionately harm.

While the majority of carbon offsets are bought by companies to offset their pollution in order to meet regulations or to be more appealing to climate-conscious consumers, there is also a sizeable individual voluntary offset market – these are individuals like you and me who are buying offsets for our personal footprints.

You may be thinking, “a way to balance out my carbon emissions without leaving my house or changing my lifestyle? Is this too good to be true?”

In some ways, yes. Not to say that these programs are not worthwhile, but there are several common issues with carbon offsets that consumers should be aware of when navigating the many programs that do this service.

How does one identify a high-quality offset program? Two main terms are brought up when judging the effectiveness of a carbon offset project – additionality and leakage. Let’s break down the jargon.

One additional factor that should be considered is permanence – how long will this project continue and are carbon emissions being reduced or simply delayed?

Now that we know what to look for, how do we make sure that the programs we invest in are following these criteria? When I first started looking into carbon offsets, I found myself overwhelmed by the different options and puzzled by how to choose. When you’re paying for projects that often occur across the globe, it is difficult to tell whether or not the program you’re investing in is effective. This is a tricky task – the majority of the carbon offset economy is not federally regulated, and this means that a lot of the task of distinguishing the good programs from the bad falls on the consumer. A few certification organizations have tried to fill in some of these gaps:

Reliance on the “quick wins”

When I started offsetting my carbon, I was shocked by how cheap it was. For my entire carbon footprint – that includes a dozen cross country flights a year – I could offset it for just a few hundred dollars a year according to various calculators. The way these programs can offer offsets so cheaply is by going for the “quick wins.” These are the low hanging fruit – for example, replacing light bulbs with more efficient ones – that are fairly cheap, but result in large gains. Currently, offsets are not widely adopted, so this model works fairly well. However, if enough people started offsetting, we would quickly run out of the low-hanging fruit and be forced to look elsewhere to reduce emissions.

There is also the issue of social equity. Often, carbon offsetting projects occur in less developed countries because the cost per unit of carbon is lower. While many offset programs can provide social services or cash flow into communities that need them, it is worth acknowledging that, in many cases, offsets rely on wealthy/high consumption countries paying to alter the behavior of those in poorer countries. We need to make sure that these programs are actually helping these communities and acting to improve equity, instead of just being a way for wealthy countries to push behavior changes onto others while still continuing to consume and emit at the same levels.

As they are convenient and relatively inexpensive, carbon offsets can be an attractive way to deal with carbon output while not fully reevaluating one’s lifestyle. As mentioned before, this model only works when only a small portion of the world offsets – this is not a global solution. Offsetting is a good tool in the short term and can fund important projects, but it should not replace direct carbon reduction. In the best case scenario, offsets should be paired with lifestyle changes and genuine effort to reduce one’s carbon footprint.

So should you use carbon offsets? It’s a complicated answer. Carbon offsets should not simply be a “get out of jail free” card and a green light to continue unsustainable behavior. The only truly sustainable way for us to battle climate change is to reduce our footprint altogether through large-scale, systematic change. Until that point however, with some research, investing in carbon offsets is still a positive move that can support local communities and take some carbon out of the atmosphere. Carbon offsets should be thought of as one tool in the movement to mitigate climate change, which will likely be the fight of our and many following generations.

Here is a carbon footprint calculator from the nature conservancy:

Here is some additional reading: