Over the last seven years SeaBED-class AUVs have shown their versatility on missions ranging from shallow coral reef surveys to searches for deep sea hydrothermal vents, in environments ranging from the open ocean to the dense ice cover of the Arctic. Besides the original SeaBED vehicle, we operate two other vehicles at Woods Hole (Puma and Jaguar which are rated to 5000m) and have built or are in the process of building five vehicles for other groups to operate.

A number of marine biological, geological and archaeological applications share the need for high resolution optical and acoustic imaging of the seafloor. In particular, there is a compelling need for conducting studies in depths beyond those considered reasonable for divers (~50m) down to depths at the shelf edge and continental slope (~1000-2000m). SeaBED-class vehicles are designed expressly with these applications in mind. Each AUV consists of two hulls connected by aluminum spars. Most of the negative buoyancy is in the lower hull, while most of the positive buoyancy is in the upper hull; this makes the vehicles naturally stable in pitch and roll. The vehicles are designed for low-speed photographic and acoustic bathymetric mapping, and are designed to “fly” within a few meters of a rugged undulating sea floor. 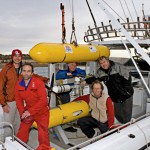 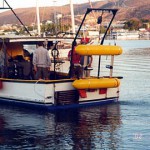 We have deployed the AUV off very small vessels such as the R/V Sultana pictured here as well as large vessels including the Swedsh icebreaker Oden. 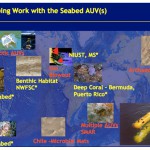 Ongoing work with the Seabed Class of AUVs. The subtitles in yellow refer to vehicles being used by people other than at WHOI. 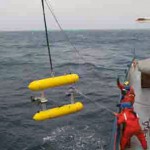 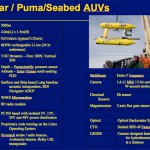 Vehicle Characteristics for the 5000m rated Jaguar and Puma vehicles – Navigation, sensing systems and software are virtually identical between these systems and the Seabed AUVs that are rated to 700m or 2000m. The only difference between vehicles with different depth ratings have to do with size and weight. 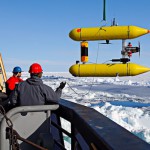 Deploying the vehicle in the Arctic 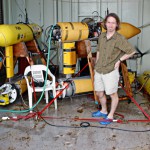 We have used multiple vehicles for research on navigation and communicatios for multi-vehicle operations. In this case we are testing on the transit prior to deploying the AUVs on the Southern mid-atlantic region close to Ascension Island off the R/V Knorr. 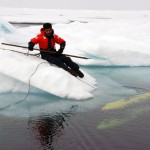 One way to recover the vehicle is to walk out on an ice ridge and hook a line onto it. Do not try this on just any ocean. 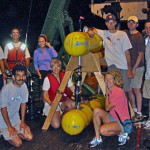 The research team for the 2003 Puerto Rico expedition aboard the R/V Chapman. 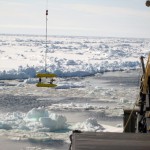 Deploying the vehicle in the Arctic from a lead of opportunity.

SeaBED-class vehicles are capable of working off of small coastal vessels or fishing boats of opportunity, and can easily be broken into components for air-shipping. These capabilities enable inexpensive deployments at far flung oceanographic sites of interest. The complete source-code to all vehicles is provided to all users of SeaBED-class AUVs, making sensor additions or vehicle maintenance much simpler than that of competing commercial offerings. SeaBED-class vehicles are also much lower-cost than other AUVs on the market. SeaBED’s twin-hull design stands in stark contrast to that of most commercial “torpedo-shaped” AUVs, but provides greatly enhanced stability for low-speed photographic surveys. SeaBED is approximately two meters long and weighs nearly two-hundred kilograms. The vehicle has two main pressure housings, containing the electronics and the batteries. The electronics are located in the top hull, and connected to the batteries and sensors in the bottom hull, by wet cabling routed through the vertical struts.

SeaBED is equipped with an RDI Workhorse Navigator ADCP for bottom-locked navigation, an Imagenex Delta-T imaging sonar for bathymetry capture and a custom camera system based on high dynamic range Prosilica cameras. It also has a WHOI MicroModem for acoustic communication and navigation, and a SeaBird CTD sensor for measuring salinity and water temperature. The main computer is a 1.2GHz Pentium processor, running Ubuntu Linux 8.04. The custom vehicle software is primarily written in the C programming language. The Puma AUV hangs over the Arctic ocean (Chris Murphy)

Puma and Jaguar were designed for deep-seafloor operation under the Arctic icecaps. Fully assembled, the vehicles are about 2 meters long, 1.5 meters tall, and weigh about 250 kilograms in air. The vehicles are driven by three thrusters capable of driving the vehicle forward at about 35 centimeters per second. Both vehicles are rated to a maximum operational depth of 6000 meters — this allows us to reach the bottom of more than 99% of the world’s ocean. Both vehicles are powered by six kilowatt-hours of lithium-ion batteries, approximately equivalent to 100 laptop batteries, and can stay submerged for up to 24 hours. While Puma and Jaguar are outfitted with identical thrusters and navigation sensors, they differ in their science payloads and in how they are used. Both vehicles carry standard oceanographic sensors for measuring water temperature, conductivity, pressure, and salinity, as well as navigation sensors, including a 3-axis north seeking fiber optic gyroscope, doppler velocity log, and depth sensor. Both vehicles also carry a WHOIMicroModem. In addition, the AUVs carry specialized sensors used for finding hydrothermal plumes, including an “Eh” sensor developed by Dr. Ko-ichi Nakamura of Advanced Industrial Science & AIST for measuring oxidation-reduction potential in the water.

Puma(the “plume mapper”) carries sensors designed for water-column surveys, most notably a pair of optical backscatter sensors for measuring the amount of particulate matter suspended in the water. Jaguar carries sensors suited to sea floor surveys, including a downward-facing optical camera and strobe, an imaging sonar, and a magnetometer. The camera takes one picture every three seconds while Jaguar is near the sea floor; this rate is fixed by the amount of time it takes for the strobe to recharge. We are currently examining the use of arrays of LEDs for underwater lighting, which will allow for higher frame rates at the cost of higher power consumption.

Other Owners of SeaBED-class AUVs

The ACFR at the University of Sydney has equipped a Seabed-class vehicle, Sirius, with a high resolution stereo camera system and obstacle avoidance sonar. As part of the Australian IMOS program, Sirius data will be used to perform surveys of marine protected areas, and to study the impacts of climate change.

The Bio-optics Laboratory at the University of Puerto Rico at Mayaguez (UPRM) has performed surveys of coral reef health with theSeaBED AUV since 2003. They now own and operate their own vehicle.

The NOAA Pacific Islands and Northwest Fisheries Science Centers jointly own a vehicle. This vehicle has been used extensively for fish surveys and habitat characterization.

The National Sun Yat-Sen University in Taiwan use a SeaBED-class AUV as a robotic platform for their robotics and oceanographic research.

The UVTC at the National Institute for Undersea Science and Technology (NIUST) also owns and operates a Seabed-class vehicle.