The Woods Hole Oceanographic Institution (WHOI) engineers have developed a new type of ocean robot called the JetYak. The JetYak is an autonomous surface vehicle that is able to map and measure water that’s too shallow or turbulent for underwater vehicles.

From USGS, Chris Sherwood:
The Jetyak is a relatively inexpensive vehicle that can execute various scientific missions in coastal waters. In August 2013, the scientists used it to map the floor of a shallow cove in the Connecticut River estuary with both downward-looking and sidescan sonar and to measure current profiles (current velocities at various heights above the seafloor) with an acoustic Doppler current profiler (ADCP).

The idea of developing an inexpensive autonomous surface vehicle began with ocean engineers Hanumant Singh and Peter Traykovski in the Applied Ocean Physics and Engineering Department at WHOI. They developed a prototype jetyak that was used to measure freshwater flow at the front of calving glaciers in Greenland in July 2013. The second-generation jetyak was built in summer 2013 with help from Sara Goheen, a USGS WHOI Summer Student Fellow coadvised by Traykovski and USGS oceanographer Chris Sherwood.

The core of the jetyak is a commercially sold gas-powered kayak built in upstate New York and marketed mostly to fishermen and hunters. It has a roto-molded polyethylene hull and an air-cooled 7-horsepower four-stroke engine. It is propelled and steered by means of a water-drive. The stock boat costs about $5,000, is 11 feet long, weighs 165 pounds, draws 3 inches, and has a payload of 360 pounds. Full speed is around 20 miles per hour, and the boat will run for 8 to 10 hours on 3 gallons of gas at survey speeds of 2 to 6 knots. Newer versions of the stock boat break into three pieces that nest together and can be transported inside an SUV or floatplane. 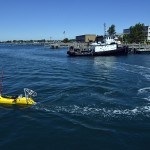 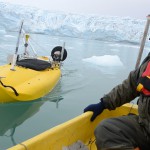 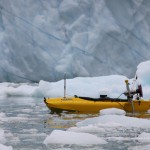 Modifications to make the jetyak autonomous draw on contributions from the hobbyist community. The two manual controls (throttle and steering) are replaced by servos—automatic devices that use error-sensing feedback to correct performance, such as those employed in remote-control airplanes and satellite-tracking antennas. The servos are run by an onboard computer developed for aerial drones. This computer, a modified Arduino, costs a few hundred dollars and includes Ardupilot software and a special circuit board that provides interfaces for the controls, radio, and Global Positioning System receiver (GPS). The only other modification is installation of a centrifugal clutch, which allows the engine to idle without moving the jetyak. With this setup, a “mission” (sequence of navigational waypoints) can be downloaded by radio from a laptop computer, and the jetyak will follow that mission autonomously. The boat can also be driven remotely by radio control.

The jetyak is rugged, has no propeller or other dangerous parts, and can run aground without damaging itself. The biggest operational problem is occasional clogging of the jet-drive intake with trash or weeds, which slow the boat down but can be easily removed. The simplicity that makes the vessel so sturdy and reliable, however, does have a drawback: the jetyak is not very smart and cannot, on its own, recognize or avoid hazards or obstacles. For this reason, it must be closely supervised while on a mission, particularly when other vessels (or swimmers) are in the area.

The jetyak is ideal for work in areas that would be dangerous for humans, such as the calving glaciers in Greenland; for repetitive and (or) protracted surveys that can be performed more precisely by autonomous systems than by human operators; and for data collection that increases the efficiency of field scientists conducting complementary tasks as they monitor the jetyak.