Today saw another visit from some charismatic sea life. A pair of sea turtles entangled in fishing gear drifted by Atlantis in the early afternoon. Two members of the deck crew hopped into the Zodiac and within a few minutes set the reptiles free.

The Vent-SID made it back to the surface with more samples today, though it still hasn’t completed a full incubation cycle. It’ll receive another round of tests and software fixes before its next trip to the bottom.

On yesterday’s dive, pilot Bob Waters, chief scientist Stefan Sievert, and graduate student Sayaka Mino dove to the bottom in Alvin. They gathered tube worms and vent fluids, as well as an exceptionally stinky rock covered in biofilms. (Overheard in the post-dive science meeting: “I promise that smell wasn’t me, even though I kind of smell.” And the reply: “No, it couldn’t be you. If you smelled like that rock, we wouldn’t be here.”)

Before ascending to the surface, first-time diver Sayaka told Stefan that she wished she could stay on the seafloor to explore further. As it was, she had no choice but to return and face her Alvin initiation ceremony. Sayaka has a special talent for isolating deep-sea bacteria, so she was crowned the Bacteria Queen, adorned with a necklace of centrifuge tubes, and handed a larger-than-life vent bacterium before being doused with ice water. 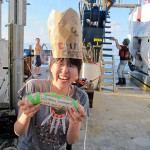 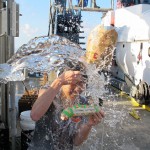 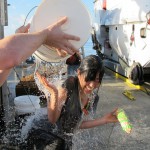 Today, pilot Bruce Strickrott, geochemist Jeff Seewald, and graduate student Jessica Panzarino made a successful dive for tube worms and vent fluids. They ended up with some other animals in their sample boxes as well, including a few crabs, some Alvinella worms, and a squat lobster. They also sent the Vent-SID back up to the surface. When they returned aboard, rookie diver Jessica noted how strange it had felt to eat a picnic lunch of PB&J on the seafloor.

Jessica is studying the metabolism of tube worms that are being incubated at high pressure here on the ship, mimicking their natural environment on the seafloor. In honor of her work, her post-dive welcome included a crown of worm tubes, a bouquet of origami flowers and syringes, and a bucket of ice water dyed red to symbolize the blood of the worms that give their lives for science. 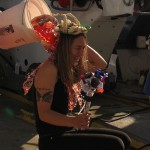 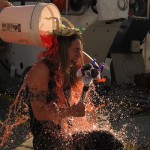 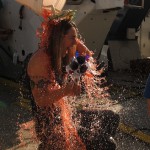