Studying the Sea in Style

I must be honest, readers: Fashion is not my beat. But it’s widely agreed here aboard the Atlantis that our very own Horst Felbeck is currently the best-dressed marine scientist in the eastern Pacific, and possibly the world. His wardrobe celebrates the biological (especially his beloved tube worms), the astronomical, and the plain old psychedelic. I feel it’s my journalistic duty to share it with you.

Feast your eyes upon the many T-shirts of Horst Felbeck:

(For a slideshow, click on the first image and scroll through.) 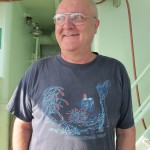 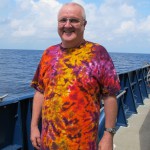 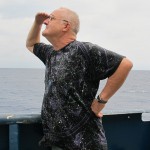 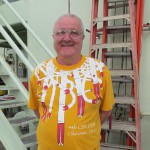 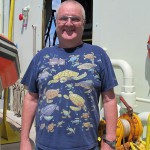 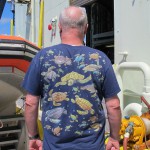 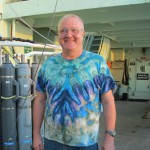 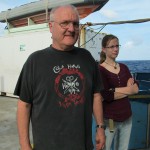 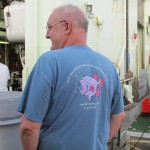 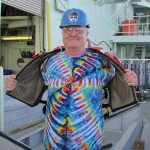 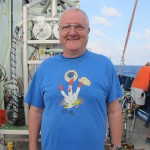 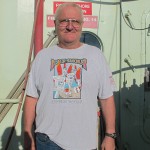 And Now, a Word From the Bridge Walking onto the bridge of the Atlantis at midnight may be a bit overwhelming at first, particularly if you have not visited during the day or the giant cup of coffee you drink prior to your journey hasn’t taken effect yet. The space is dark and you are liable to run into just about everything if you don’t wait five minutes to allow your eyes to adjust to the lack of light. Once your eyes adjust, shapes of chart tables, engine panels, and the captain’s chair (which I am known for frequently running into) show themselves in dim and now-avoidable outlines. Welcome to the bridge, a place not many frequent apart from the deck crew and the chief scientist, and the occasional visitor who may or may not be lost. Generally the ship’s crew works behind the scenes to make a science cruise run smoothly and efficiently. Most people know that Captain Colburn is in charge of the vessel: his is the voice in the sky that comes on and off the radio during Alvin launches and recoveries. But what about the other hours of the day? That’s where the deck officers and able-bodied seamen come in. Apart from the captain’s position, the Atlantis has three licensed officers who are each responsible for different tasks aboard the vessel. The Chief Mate oversees the deck department, the Second Mate (me) is responsible for navigational work and equipment, and the Third Mate maintains the safety and emergency equipment aboard.

During any given time under way, there will be a deck officer on the bridge in charge of “the watch,” accompanied by an able-bodied seaman to assist him or her. In conjunction with our counterparts in the engine room, we drive the vessel to different science stations, keep a lookout for traffic (or sometimes fouled sea turtles), make sure we are ready for instrument or Alvin launches and recoveries, and generally maintain a safe working environment for the vessel at all times. We aim to keep our shipmates safe and sound, 24 hours a day. So what does the bridge look like? When members of the science party wander onto the bridge, we often hear it looks like a spaceship. As I am not an astronaut and have never been aboard a space ship, I cannot confirm or deny this statement, but I understand why someone might suggest this. There are panels and buttons everywhere, and unfamiliar instruments most people see only in movies. The next question I always get is: Where is the steering wheel? (The helm in nautical terminology.) The answer is, the Atlantis doesn’t have one! The vessel is actually steered by turning the ship’s drives (thrusters) and increasing the number of RPMs (rotations per minute) in the direction we want to go.

The Atlantis has three thrusters: two stern and one bow. We can move the ship by moving thrusters individually or by tying the three thrusters together into an integrated system known as joystick mode (like Atari or other old fashioned video games) or in an autopilot setting. The Atlantis is capable of what is known as dynamic positioning (DP). DP allows the ship to move or maintain position within meters of our target at very slow speeds. It also will hold the ship in an exact position and adjust thruster direction and RPMs to counter any wind or current that would otherwise move the ship. All these steering options make the Atlantis highly maneuverable, which is essential for deploying and recovering instruments like the CTD rosette, the Vent-SID, the Large Volume Pump, and of course, Alvin. Other things you will find on the bridge include the radars, which use radio waves to detect traffic and land around the vessel; an electronic chart system (similar to MapQuest but for ships); and a Global Positioning System (GPS), telling us where the vessel is at any given time. The Atlantis uses paper charts (large ocean maps) for official navigation purposes, and as the second mate I am responsible for plotting our voyage plans and science stations on these charts.

Traditionally vessels move cargo, anything from televisions to oil, from point A to point B. The Atlantis is unusual because we do not carry traditional cargo. Instead we we move personnel, instruments and the vessel to different spots on the globe to establish data and samples for a number of scientific missions and goals. The deck and engine departments attempt to work seamlessly to put the ship where it needs to be daily, so that all the science party needs to worry about—apart from those lucky few who are assigned to night operations like myself—is rolling out of bed after a peaceful night’s rest for Alvin dive prep. And if that is too deluded a dream for our scientists (who tend to work around the clock whilst aboard), I will have fresh coffee available for all at 06:00, when my day is almost over and the waking world is beginning to stir. A ray circled Atlantis and saw Alvin off during Wednesday’s launch.

On Wednesday, pilot Bob Waters, microbiologist KT Scott, and postdoc Nuria Fernandez Gonzalez headed down to the vents to find the Vent-SID microbial incubator that we’d deployed the day before. A large ray swung by to wish them a successful dive, and they watched it swim around the sub through the viewports before starting their descent.

At the bottom, the divers sent the Vent-SID back to the surface and collected several samples of vent fluids, some tube worms, and chunks of a black-smoker vent structure. A hydraulic line on one of Alvin’s manipulator arms got nicked at the black smoker, so the sub surfaced a little earlier than planned, but the Alvin group got everything into shape for the next day’s dive. Craig Taylor rinses the Vent-SID with fresh water after recovery from the seafloor.

The Vent-SID’s final deployment was our most successful yet. It returned to the surface full of samples that had incubated on the seafloor. The instrument is designed to measure the rates at which microbes perform certain biochemical processes under the conditions of their natural environments at the vents. Microbes are the base of the food chain at hydrothermal vents, so understanding how they work is an important part of understanding the whole vent ecosystem.

The Vent-SID, the latest version of the SID family of instruments developed by Craig Taylor and engineers at WHOI, works by pulling vent fluids rich with microbes into its insulated glass incubation chambers and keeping them at the temperature of the vent, something that has never been done before. At regular intervals over the next few hours, the instrument takes samples of the fluid in the chamber and preserves them, so the researchers can determine what microbes are present and what their activities are. These measurements will tell the scientists how productive vent ecosystems are and help them get a better idea of their importance for biogeochemical cycling in the ocean.

First-time Alvin diver Nuria has been hard at work throughout the cruise preparing the Vent-SID for its deployments and processing samples. When she returned to the ship after her dive, she was crowned the Vent-SID Queen with a garland of sample bags and a tubing necklace before she received her ice-bucket initiation. 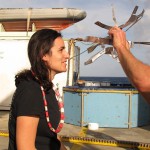 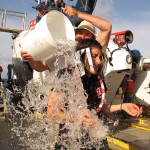 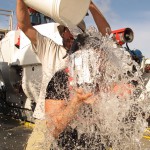 In local sports news: The all-hands ping-pong tournament has been heating up over the last few days. Alas, the two top-performing scientists on board, Jeff Seewald and Stefan Sievert, were eliminated in the semifinals. They now join those of us (ahem) battling for third place overall in the consolation bracket. Tomorrow morning, ordinary seaman Ronnie Whims faces bosun Patrick Hennessy in the championship match. Spent the day before the dive running samples, troubleshooting, and doing [tube worm] dissections all day from 8 a.m. until the wee hours and stumbled into bed at around 2 a.m.-ish. Six hours later, one of the grad students came into my room, shook me awake and said, “Hey, wake up, can you go on today’s Alvin dive?”

When I wake up, my ‘reboot screen’ has lots of error messages (I am not a morning person), so my response was mostly expletives with a few prepositions tossed into the mix. Once reality had percolated into the miasma in my skull, I got quite excited.

It turns out the day’s scheduled dive had to be changed because of an equipment issue, and they needed somebody who had directed an Alvin dive before, so there you have it.

Rolled out of bed, scrubbed the worm guts out of my hair and fingernails, grabbed a doughnut and banana from the galley (no beverages; you do not want to have to pee while crammed into the rather tiny Alvin sphere with two other people), jumped in the sub, and down into the blue we go.

We had a great dive, collecting many water samples at the bottom, as well as a bunch of Riftia tube worms. The Alvin has been rebuilt; the new version has five windows instead of 3, plus some amazing high-resolution video cameras, so you can see everything clear as day and it becomes hard to fathom (ha! ha!) that you are almost two miles below the surface of the ocean.

It is very beautiful down there. The water coming up through the rocks is as warm as bathwater, and when it hits bottom water (2 Celsius), it shimmers. Down there you have these massive bushes of giant tube worms with huge red gills extending out of 6-foot tubes… They kinda look like lipsticks. OK, imagine shimmering water around giant lipsticks. Um. This isn’t quite communicating the magic and mystery of nature, but you know how it is. When something is really beautiful, words are crude tools, at best.

So, it’s dark, and silent, and shimmering, with organisms that can best be described as hallucinatory, thriving on deadly gases that are released as the Earth’s crust rips itself apart at the seams… That works.