During today’s Alvin dive, pilot Bob Waters, geochemist Jeff Seewald, and microbiologist Fengping Wang descended to the seafloor. Their first task was to find a new research tool called the Vent-SID, which had been deployed to the bottom for the first time on Friday, and send it back up to the ship.

The Vent-SID collects samples of microbes that live in vent fluids. Eventually, the scientists on board hope to use it to incubate microbes in their natural environment on the seafloor and study their activity levels.

When the instrument reached the surface a little after noon today, the deck crew brought it aboard. Stefan Sievert, Craig Taylor, Jeremy Rich, and Nuria Fernandez Gonzalez were on hand to meet it and have a look inside, along with some of their students and collaborators. The Vent-SID successfully collected and preserved samples of the microbial communities at the vent where it was stationed, so the researchers will analyze those. The incubation part of the test-run was interrupted, so the team will review the system’s activity log and possibly make a few tweaks before the Vent-SID’s next deployment a few days from now.

All of today’s divers have been in Alvin before (or at least, in the previous incarnation of Alvin), so there were no five-gallon buckets of ice water flying on deck today. But stay tuned for our next dive… Alvin recovery swimmers Phil Santos, Peter Leonard, and Logan Driscoll meet the sub as it surfaces. Atlantis can be seen in the distance.

After yesterday’s maintenance work, Alvin was back in the water for a fantastic dive today. Pilot Phil Forte, microbiologist Craig Taylor, and microbial biogeochemist Jeremy Rich traveled down to the vents.

The trio located the Vent-SID on the bottom, moved it to the site that had been scouted out on a previous dive, and triggered the start of microbe sampling and incubation in the Vent-SID’s chambers. They also brought back a beautiful chunk of vent chimney covered in Alvinella worms and gathered mussels for analysis of microbial biofilms on the animals’ shells and symbiotic microbes living in their gills.

As the sub surfaced, I tagged along with a team of swimmers riding out to meet it in a Zodiac launched from the ship. We skimmed across the water (a bumpy ride even on a relatively calm day) and watched as Alvin broke the surface. The A-frame on Atlantis lifts Alvin from the water.

The swimmers hopped into the ocean and began prepping the sub for recovery. They attached a safety line to the science basket, so that if the recovery got rough, the day’s samples wouldn’t be lost. As Alvin approached the ship’s stern, they put out a sea anchor to help stabilize it, communicated with the pilot to help him get the sub into position, and attached the two lines that lift Alvin out of the water.

Once the sub was back aboard, first-time Alvin diver (and native Wisconsinite) Jeremy received his ceremonial buckets of ice water wearing headgear specially prepared for the occasion by some of his shipmates. 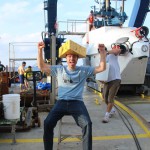 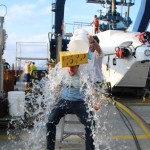 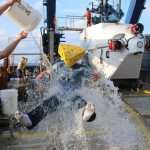 Atlantis deck crew members deploy the Vent-SID for the first time ever.

After Alvin‘s successful first dive of the trip yesterday, today brought the first deployment ever of a brand new robotic tool called the Vent-SID. It will allow scientists on board to determine the metabolic activity of microbes—such as how quickly they use up certain substances—in their natural environment on the seafloor.

The Vent-SID is on its way to the bottom now. During Alvin‘s next dive, the sub will locate the Vent-SID on the seafloor, move it into position, and trigger the start of sampling. Since the tool has never been used at sea before, we’re eager to find out how its first test-run goes. While Alvin and its crew were on the bottom, the science team met to review yesterday’s dive. Stefan Sievert presented images of the site where the Vent-SID will take samples, the spot where giant tube worms were collected, and the black smoker from which chimney samples were taken.

Today’s dive went smoothly despite some squally weather that dumped rain on the Atlantis throughout the day. The captain shared a satellite image of the culprit: tropical weather system Invest 96E. The cause of our rainy day: Invest 96E. (NOAA/GOES)

But the Alvin recovery team worked gamely through the rain and got the sub back aboard safely. To keep the crew and the sub’s sensitive electronics dry, Alvin backed into its hangar with the hatch closed. Alvin backs into its hangar after a successful recovery in the rain. Alvin comes aboard after its first dive of the expedition.

Atlantis reached the field site early this morning in perfect weather. The ship’s crew got us positioned over our target and launched the motorboat that would bring back the sub’s escort swimmers. Scientists wrapped up their preparations of the instruments and sample boxes strapped into Alvin‘s basket. And the Alvin group wheeled the sub out onto the deck and finished their pre-dive checklists. Finally, pilot Bob Waters, chief scientist Stefan Sievert, and grad student Jesse McNichol climbed in, and the A-frame picked Alvin up and set it into the water.

The three descended a mile and a half to the seafloor, where they visited several vents. They found what looks like a good spot to deploy the Vent-SID for measuring microbial activity rates at the vents, set out colonizers for microbes that will be brought to the surface, collected vent fluids at high pressure in Jeff Seewald’s gas-tight samplers for chemical and microbial analysis, and grabbed some giant tube worms for studies of the symbiotic bacteria that live within them. Stefan Sievert (left) and Jesse McNichol return from their dive.

Alvin team members in the TopLab aboard the ship stayed in touch with the sub throughout the dive. After the sub crew finished its work on the bottom in the late afternoon, Alvin surfaced and made it back aboard without a hitch. Jesse received the traditional welcome for a first-time Alvin diver: a few buckets of ice-water dumped over his head. (On such a warm, sunny day, his fate didn’t seem half bad.)

Stefan reported that his first experience in the newly revamped sub was wonderful. Alvin now has five viewports instead of three, and he raved that the new configuration gives science observers a much better view of their surroundings. “It was incredible,” Jesse added. He’s seen these vents before, through a live video feed on a previous expedition. “But to actually be there—it’s completely different.” We expect to reach the vents early tomorrow morning, so everyone has been gearing up for our arrival. At an all-hands science meeting yesterday, chief scientist Stefan Sievert and the other principal investigators discussed the expedition’s research goals and how to get the samples and data they need to achieve them.

One big focus will be understanding the activity of microbes that live beneath the seafloor and in the fluids emanating from the vents. “We know pretty well who’s there,” Stefan says of the microbial community at the vents, “but we lack an understanding of how active they are.” An innovative new tool called the Vent-SID that will be deployed for the first time ever on this cruise will help him and his colleagues find out.

Meanwhile, the Alvin team has been getting the sub ready for its first dive. They’ve also been preparing all potential divers on board with a briefing on what to expect inside the personnel sphere and an explanation of the sub’s safety features. Anticipating a possible dive tomorrow morning, expedition leader and pilot Bob Waters met this evening with the first pair of scientific observers, Stefan and graduate student Jesse McNichol, to review the dive plan. With a little luck, they’ll be on their way to the bottom to explore the vents just a few hours from now. We’re still steaming toward our study site, but thanks to Atlantis‘ sophisticated instrumentation, we’re getting some science done along the way. Instead of making a beeline for the vents where we’ll spend most of the expedition, we’re transiting south along the East Pacific Rise, a boundary where two tectonic plates are sliding away from one another. As the plates spread apart at this volcanically active mid-ocean ridge, new seafloor crust is constantly being created.

We’re following the ridge and mapping it using the ship’s multibeam sonar system. Its 432 beams of sound fan out to scan a swath of seafloor beneath us that’s more than 8 kilometers wide. The sound bounces back to the ship, creating a depth profile of the ridge. This particular stretch of the East Pacific Rise hasn’t been mapped in detail for more than a decade, so this is a perfect chance for us to do so with modern GPS and a much more sophisticated sonar system.

Scott White is keeping a close eye on the mapping to make sure the ship isn’t moving too quickly to collect good data. We’ve adjusted our course and speed slightly for the sonar survey. But because we were originally scheduled to arrive at our field site tomorrow afternoon, and Alvin always starts its dives in the morning, these tweaks let us squeeze in some bonus science without delaying our other work at all.

In other good news, the hurricane that was near our study site a few days ago has continued to move away to the northwest. If all goes well, Alvin should be able to make its first dive of the trip in just a few days!