A Visit From Alvin’s Fan Club Pilot whales kept an eye on Alvin as Bruce Strickrott rode the sub during yesterday’s recovery. The science team and the Alvin group prepped the Vent-SID for its deployment last night. Craig Taylor (seated) sends the last commands to the instrument before it’s being sent to the seafloor.

We’ve kept up a busy pace of dives over the past few days. Yesterday’s recovery was even more spectacular to watch than usual: A pod of pilot whales stopped by to check out Atlantis and Alvin as the sub came up. The three divers inside—pilot-in-training Jefferson Grau, pilot Phil Forte, and research associate Sean Sylva—could hear our visitors but weren’t able to see them. The trio came aboard with several more vent fluid samples and tube worms for the science team.

Yesterday also brought the second deployment of the Vent-SID microbial incubation tool. After some testing and debugging on deck, the platform went over the side again last night. It should be collecting and incubating microbes now. We’re looking forward to its arrival at the surface tomorrow afternoon to see what it brings back.

Newbie diver Donato, easily recognized around the ship by his imposing frame, was welcomed back with a limbo stick. When he could no longer make it underneath, he got his ice-water shower. Chief scientist Stefan Sievert delivered the first blow, and grad student Jesse McNichol (a freshly initiated Alvin diver himself) finished the job. 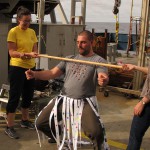 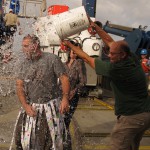 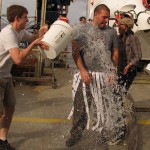