Increases in atmospheric carbon dioxide (CO2) levels and associated changes in the earth's climate that have occurred since the preindustrial era have prompted scientists and engineers to devise strategies for removing some of this excess CO2 from the atmosphere. One such strategy, called ocean fertilization, involves the amplification of a natural system in the ocean called the biological pump.

Ocean fertilization is a form of geoengineering (large-scale human actions to deliberately manipulate environmental systems) that involves adding nutrients to the upper (sunlit) layers of the ocean to stimulate phytoplankton activity (photosynthesis) in an attempt to draw down atmospheric CO2 levels. Phytoplankton are tiny marine plants that form the base of the marine food web and are naturally limited by the availability of elements such as nitrogen and iron. Proposed ocean fertilization strategies have included the direct application of micronutrients (e.g., iron) and macronutrients (e.g., nitrogen) to the ocean surface, as well as technologies like wave pumping and floating tubes to physically move deeper, more nutrient-rich waters to the surface.

What is Macronutrient Fertilization?

Macronutrient fertilization refers to the addition of growth-limiting macronutrients such as nitrogen and phosphorus to the surface ocean to stimulate phytoplankton production, which is expected to increase photosynthesis and remove CO2 from the atmosphere.

Large-scale ocean nourishment with urea, a nitrogen-rich organic compound commonly used in fertilizers, has been proposed as a potential ocean fertilization strategy by the Ocean Nourishment Corporation (ONC), an Australia-based company.

What is Micronutrient Fertilization? Micronutrient fertilization refers to the addition of growth-limiting micronutrients such as iron to the surface ocean to stimulate phytoplankton production, which is expected to increase photosynthesis and remove CO2 from the atmosphere. What is Artificial Upwelling?

Artificial upwelling is a geoengineering strategy that involves bringing relatively nutrient-rich waters from depth up to the surface ocean to stimulate phytoplankton activity and draw down atmospheric CO2.

Floating Tubes: This strategy proposed by Lovelock and Rapley (2007) involves the deployment of thousands of plastic tubes (~300-600 feet long and ~30 feet in diameter) in the oceans, bridging nutrient-poor surface waters with colder, nutrient-rich waters at depth. In addition to mixing via natural wave motion, a one-way valve would pump nutrient-rich deep water through the tubes to the ocean surface, stimulating phytoplankton activity.

Deployment of the single pump off the back deck of the research vessel Kilo Moana. Photo: Karin Bjorkman, SOEST. 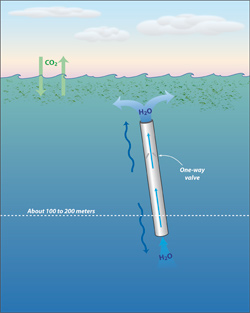