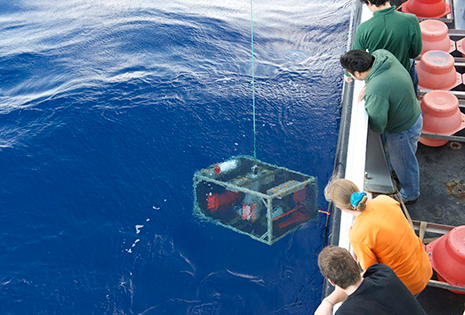 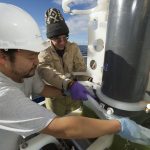 Scripps Institution of Oceanography microbiologist Doug Bartlett (right) is dressed for the cold room, where he will be taking the water sample Walter Cho is helping him collect from the hadal elevator. (Photo by Ken Kostel, Woods Hole Oceanographic Institution) 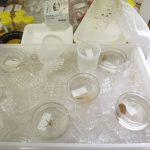 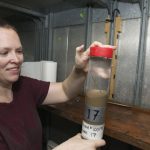 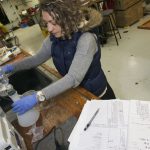 University of Aberdeen microbiologist Eleanna Grammatopoulou filters four liters of seawater to collect the organic matter that could eventually end up as food on the deep-sea floor. (Photo by Ken Kostel, Woods Hole Oceanographic Institution) 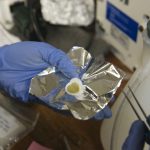 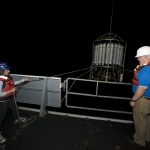 Eleanna Grammatopoulou gets a lesson in launching at CTD from two experts, Brian Clampitt from the R/V Thomas G. Thompson, and Marshall Swartz from WHOI. (Photo by Ken Kostel, Woods Hole Oceanographic Institution) 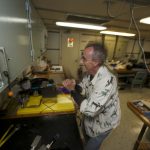 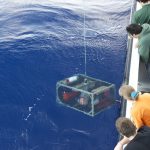 There’s always excitement in the lab when a new fish or something else surprising comes up from the bottom. The real stars of the deep trenches, however, are too small to attract much of an audience.

Microbes are sometimes jokingly dismissed as “bugs” by other biologists, but they are, in fact, the cornerstone for food webs in deep-ocean trenches—and around the globe. Microbial activity in the ocean and on land is also responsible for cycling nutrients and other materials as part of the global biogeochemical cycles that make life on Earth possible, and could very well tell us something about how life started here and how it might be able to thrive elsewhere in the solar system.

Doug Bartlett from the Scripps Institution of Oceanography and Eleanna Grammatopoulou from the University of Aberdeen have been sampling the bacteria and other microbes that have adapted to life in the deep ocean at every station on the cruise. Their goal is similar to that of the other biologists on the ship: to understand the quality, quantity, age, and origin of food in the deep ocean; the abundance and diversity of life in the Kermadec Trench; the environmental factors under which it thrives; its role in the hadal ecosystem; and the adaptations that different species have evolved to cope with conditions in the deep ocean.

To survive in the deep ocean, microbes, like larger organisms, have had to evolve adaptations suited to some challenging conditions—and because they are more diverse than other form of life in the trenches, the adaptations microbes have evolved are almost certainly more diverse, as well. But we don’t have videos of behavior or specimens to dissect in the lab to give us clues about who they are and how they survive, which puts us at a disadvantage because they have a potentially large impact on us at the surface.

Marine microbes are responsible for the movement of carbon from the atmosphere into and through the ocean, and because the seafloor is the largest single biome on the planet, microbes in the sediment represent a major pathway for carbon to be taken up and sequestered for long periods. In trenches, where seafloor sediments are being pulled down into Earth’s crust and mantle with the subducting tectonic plate, this long-term sequestration stretches into geologic timescales. Despite this fact, carbon uptake and sequestration in the trenches are not included in most climate models.

Perhaps the most fundamental question about hadal microbes we are trying to address is how anything finds enough food to survive in the deep trenches at all. One of the most reliable food sources in the deep ocean, far from the energy of the sun, is the steady rain from above of organic material, mostly plankton, the remains of dead organisms, and fecal matter. When Bartlett studied sediment samples from Challenger Deep, one of the most abundant things he found was cyanobacteria, a type of bacteria common in the surface waters that generates its energy from photosynthesis.

But only about 0.01 percent of the organic matter leaving the surface reaches the seafloor at 5,000 meters. Even less reaches 10,000 meters. “By the time stuff gets down there, it’s been pretty well chewed-over,” said Bartlett. “What’s left is difficult to deal with—for example, complex carbohydrates and the remains of chitinous shells. But the microbes have to do a pretty good job of breaking these things down.”

And yet, the hadal zone in many parts of the ocean flourishes on this seemingly meager, hardscrabble fare. One reason may be the very shape of the seafloor in the trenches themselves. Grammatopoulou and her advisor, Dan Mayor, are investigating the hypothesis that the V-shaped topography of trenches helps funnel organic matter into the deepest parts, by looking at characteristics of organic matter drifting down from above, as well as the diversity of microorganisms in the water and the number, biomass, and diversity in the sediment. It is this organic matter that connects the surface to even the deepest parts of the ocean, so they are attempting to tease out details about its quality, quantity, origin, and age—all the things that could play a role in such things as the abundance and diversity of microbial life and that ripple out into the hadal ecosystem to influence what can and cannot survive in the trenches.

In addition, Bartlett is looking at the evolutionary adaptations that permit life in the trenches and how widespread these adaptations, and the microbial species themselves, are in trenches elsewhere around the world. He is doing this by looking for the genes that distinguish hadal from nonhadal microbes and also by culturing samples in stainless steel pressure vessels in which he can begin to simulate conditions found in the deep ocean. But finding exactly the right combination of conditions is a delicate balance that only succeeds in a fraction of attempts. And even then, the “microbial dark matter,” as Bartlett describes it, that we know shares the planet with us remains something of a mystery, to the point that he wouldn’t be surprised to find an entirely new phylum of organisms among the microbes that live in the deep ocean. There could even be chemosynthetic bacteria in the deep, geologically active trenches that “breathe rock and eat gases,” issuing from places where the seafloor bends, cracks, and compresses under forces breaking Earth’s crust.

Despite the fact that such a wide diversity and abundance of microbes have found the hadal environment a comfortable place to live, many are distinctly unsuited to the warm, low-pressure, oxygen-rich conditions at the surface. Some even lack the ability to repair their DNA after exposure to ultraviolet light. For that reason, Bartlett and Grammatopoulou hurry every time their uncharismatic samples come to the surface to preserve what they can of the life they find that comes from a place that is more like another planet right here with us on this one.

“What we’re ultimately after,” said Bartlett, “is to figure out how life exists in physical conditions closer to Europa than to the surface of Earth.”