My oh my oh meiofauna 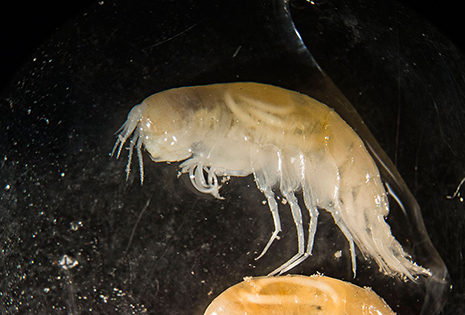 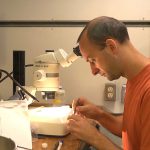 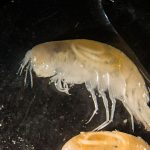 This hadal amphipod is infected with juvenile parasitic nematode worms (the white structures in the animal’s side). Scientists are working to understand the life cycle of the worms and their effects on their amphipod hosts. (Photo by Jeff Reed, Montana State University) 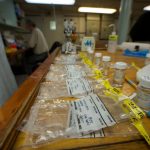 Sample bags and vials ready for the next round of dissection in the bio lab. (Photo by Ken Kostel, Woods Hole Oceanographic Institution) 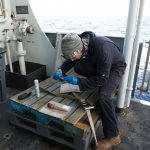 University of Aberdeen graduate student Thomas Linley takes advantage of the light on deck to take photos of a snailfish that he will stitch together into a single, high-resolution, 3-dimensional image. (Photo by Ken Kostel Woods Hole Oceanographic Institution) 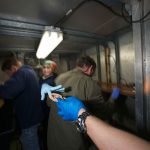 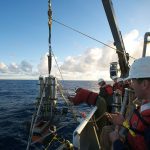 Next up the food chain from microbes is the still-minuscule world of the meiofauna. The majority of these organisms are difficult to see with the naked eye, but size means nothing—nematode worms, which dominate this category of organisms, are the most common animal on the planet. In addition to trenches, they are found in soils around the globe, parts of Antarctica, hydrothermal vents, and underground aquifers, and they play an integral role in recycling nutrients and processing organic matter through whatever ecosystem they inhabit.

Despite their ubiquity, very little is known about the meiofauna of the deep trenches, which is why there has been so much interest in the sediment cores and why we spent so much effort looking for a way to collect even one more core after Nereus was lost. “All you need is a core and you have a whole community,” said Daniel Leduc, a biologist at the National Institute of Water and Atmospheric Research (NIWA) in New Zealand.

That community can include as many as one million nematodes living within one square meter of seafloor, with most of those on the surface where the food is most abundant, and others within a few centimeters of the surface. Some will eat bacteria and other microbes, but they are by no means limited in their diet and their presence and diversity can act as a barometer of the health of an ecosystem. A few have developed complex symbiotic relationships with specific species of bacteria, providing the microorganisms with a place to live in their gut and receiving nutrients from their passengers.

Some nematodes are also parasites, and we have found a few amphipods infected with juvenile worms. Biologists who study these nematodes often consider the presence of parasites like this as a good sign of the ecosystem’s overall health. “Knowing that a parasite can complete its whole life cycle in an environment like a trench is important,” said Leduc. “In that way a trench isn’t much different from shallow systems—it says that conditions are favorable to life.”

Conditions in sediments collected in the Kermadec Trench are likely to be favorable to meiofauna in part because cores from the nearby Tonga Trench showed a healthy community of nematodes. This surprised biologists working on the cores because sediment from the nearby Challenger Deep collected by HADES chief scientist Tim Shank using Nereus in 2009 found no nematodes. The reason for this is still uncertain, but it may have to do with the fact that Challenger Deep is situated far from land beneath a section of the Pacific that contains very few nutrients and so contributes very little organic matter to the deep ocean, a sign that trenches and the things that live there are still tightly linked to the surface.

Leduc has examined one or two cores from each Nereus station on the HADES cruise and will survey the fine-scale distribution of nematodes in the top 10 centimeters for signs of life, much like doing a transect across a beach, but on the centimeter scale. He will then try to identify the species and their individual roles in the hadal ecosystem. This isn’t an easy task, as most nematodes are only about 0.5 millimeters in length. Only about 4,000 to 5,000 of 20,000 known species of nematodes are found in the ocean, not because they are less prevalent there, but because comparatively few have been identified and even fewer have been studied. For that reason, Leduc and his colleagues at NIWA are undertaking their own sort of exploration, one that is driven by the scales on which the meiofaunal community operates. “It’s not always about how far or how deep you go,” said Leduc. “It’s how closely you look.”