Picking up, moving on 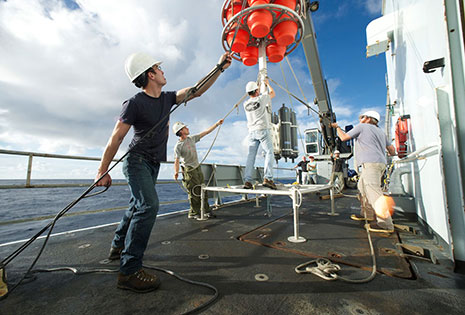 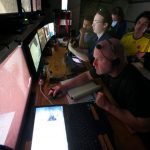 WHOI biologist Tim Shank gets an up-close look at animal tracks on the seafloor of the Kermadec Trench 10,000 meters (6.2 miles) beneath the surface during the final dive of the hybrid remotely operated vehicle Nereus. (Photo by Ken Kostel, Woods Hole Oceanographic Institution) 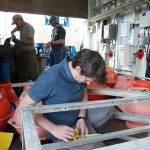 University of Aberdeen biologist Alan Jamieson constructs a new fish trap out of materials taken from other instruments and borrowed from the ship’s stores. (Photo by Ken Kostel, Woods Hole Oceanographic Institution) 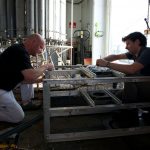 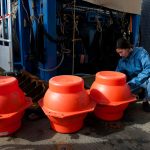 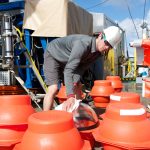 Tom Lanagan, a WHOI technician and member of the Nereus team, inspects one of the glass flotation spheres for signs of age or weakness. (Photo by Ken Kostel, Woods Hole Oceanographic Institution) 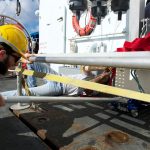 Matteo Ichino from the National Oceanographic Centre in Southampton and Jeff Drazen from the University of Hawaii remove extra flotation from the hadal lander to compensate for the weight that was also removed. (Photo by Ken Kostel, Woods Hole Oceanographic Institution) 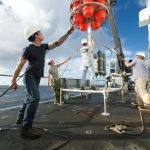 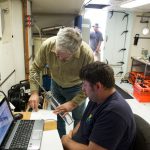 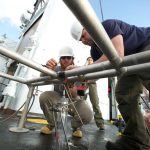 Clif Nunnaly from the University of Hawaii (in sunglasses) helps Leighton Rolley bolt his prototype core sampler to the base of the hadal lander. (Photo by Ken Kostel, Woods Hole Oceanographic Institution) 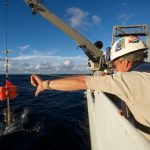 First, a sincere thank you to everyone who has written to us via email, Facebook, Twitter, and probably some ways we’re not aware of yet expressing their sorrow over the loss of Nereus. It is good to know that others share our shock and disbelief. But we also know that the questions we’re asking are too basic, too fundamental to life on this planet, for us to let what happened stop us in the time we have left out here.

Even before the news about our loss went out, people here were taking stock of what we had on the ship and making plans for ways to carry on with our research. By evening, we launched the ship’s CTD rosette, a workhorse ocean science instrument that measures conductivity (which provides salinity), temperature, and depth, to gather water samples down to 5,000 meters and record chlorophyll levels in the upper water column. These will give us an idea of how much primary production (photosynthesis) is occurring in the surface and possibly a way to trace the path of food from the surface to the deep seafloor.

Today [Sunday], we set about our return to science in earnest. This morning, small teams disassembled and inspected the glass flotation spheres that bring instruments back to the surface. (We do this after every deployment, but today it felt extra-critical.) Another group assembled a new fish trap from spare parts. This will allow us to make more deployments up the side of the trench to explore the biogeographic transition zone over which fish suddenly disappear from the seafloor. We are now working our way up the western side of the Kermadec Trench, so fish we collect here will be compared to those we collected down the axis of the trench to address the question of whether both communities are genetically linked. We know the fish don’t move much deeper, but how much do they migrate along the depth to which they seem to be confined?

The respirometer mounted on the hadal elevator ran experiments with specimens placed in it by Nereus. Because those experiments are no longer possible, the researchers took the respirometer and other equipment off the lander and added Niskin bottles to convert it into a “hadal water sampler.” A new core sampler was also installed on the hadal lander. These two instruments—the water bottles and coring device—plus the CTD will allow us to gather additional data for the microbiologists and macrobiologists, who want to study the microbes, plankton, and the food supply falling from the surface to hadal depths. You’ll learn more about that in a coming post, but, briefly, they are interested in some of the most basic questions about life in the trenches, including how much of what kinds of food makes it to hadal depths, the abundance and diversity of microbial life in deep-ocean sediments that arise as a result, and the adaptations they have evolved to thrive in the trenches.

By dinner, we had both fish traps and the elevator in the water and headed to the seafloor at depths of around 7,000 meters. We also had a lucky break today and collected some pumice floating past the ship. Pumice is volcanic rock that resembles solid foam. It contains air bubbles that were trapped when the molten rock cooled rapidly after eruption. Many specimens of pumice actually float. The pieces we found today turned out to be tiny rafts of life carrying several different organisms, including crabs, barnacles, anemones, hydroids, and amphipods. As we discovered on our 8,000-meter dive, these rafts can eventually sink, providing yet another pathway for food to reach the deep ocean. Out here, underwater volcanoes are common as they are near most trenches. This means pumice formed during eruptions could constitute yet another way for food to circulate to the deep ocean. But how much, no one knows. This is new territory.

And that is why we’re out here—to identify new questions to ask and to push against that flimsy yet frustrating boundary between what we know and what we don’t know. Pilot Casey Machado summed up this sentiment and what Nereus has taught her over the years about what can and can’t be done in a remembrance she wrote over the weekend: “As we move forward I urge that the memory of Nereus be a constant reminder for us to strive to not settle in what we do and, armed with all the lessons we have learned, to continue to push what others may consider achievable.”