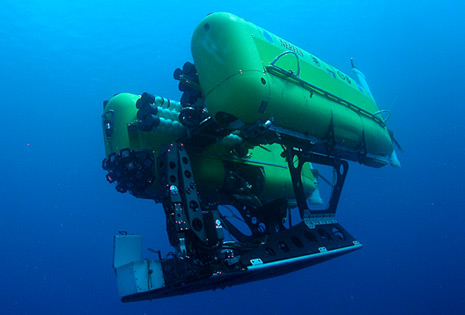 We lost Nereus today. It was always a possibility, given where it was designed to go. The fact that it was lost doing what it was intended to do in no way lessens the sting. Nereus is gone.

Our dive last night was the deepest one planned of the entire cruise—10,000 meters. Six miles. Everything was going fine. Two sets of pushcores were in the sample basket, and we’d recorded nearly two hours of video transects, plus more of individual animals that thrive in the hadal environment at the bottom of the Kermadec Trench. We’d just completed collecting a sea cucumber for the respirometer and were getting Nereus ready to head to the underwater elevator. Then the camera feeds abruptly went dark, and we lost communication with the vehicle.

We weren’t particularly worried—it had happened before and the vehicle designers had planned for something like this. Whenever Nereus lost contact with the surface, it was programmed to wait 30 minutes so that the ship could be moved a safe distance away before Nereus dropped its ascent weights. So we moved and waited. But this time the acoustic communications modem on the vehicle, which is used to determine the vehicle’s position from the ship, also went silent.

This still wasn’t a troublesome problem. We knew its last position on the seafloor, roughly how fast it would rise, and the nature of the currents beneath the surface. So we knew approximately when and where it would appear. But it didn’t. Groups of us stood as high on the ship’s catwalks scanning the ocean as lines of squalls rolled through and blurred the horizon. Hints of concern began to appear as time passed, but again, it wasn’t particularly troublesome because there were several more back-up release modes built into the vehicle. The last was a “dead-man” galvanic release holding the weights that was set to corrode away roughly 24 hours after Nereus went in the water.

We were nearing the time window associated with the first of those backup releases when one of the ship’s crew spotted some white objects in the water. Then more. The rescue boat went in and three crew members began scouring the surface with nets as more and more white dots appeared. By then we knew. Nereus was gone.

It would be easy to give up after a body blow like this, to say, “That’s it. Let’s head for port.” And it is tempting. But time on a ship like this is not easy to come by. Or cheap. We’re sitting over the top of one of the deepest trenches on the planet, one that doesn’t get visited very often. We still have a lander, a fish trap, a hadal elevator, and lots of spare parts. We also have engineers and scientists who have perhaps a combined century of experience among them solving problems and designing tools to study the ocean.

Don’t get me wrong, this isn’t the plucky musical montage sequence in a Hollywood movie at the end of which we roll out a brand new underwater vehicle, beat the town bully, and win the girl. This hurts. But we’ll continue to do what we came here to do because in the end this is about learning something about a place that does not give up its secrets easily.