Amphipods all the way down 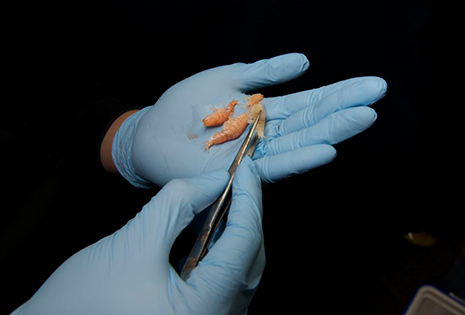 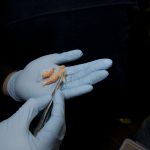 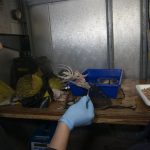 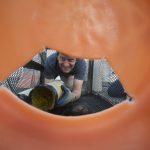 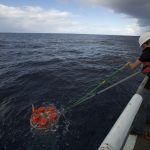 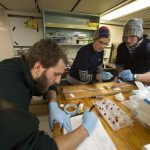 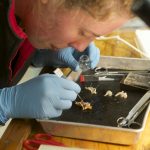 University of Oregon graduate student Kirstin Meyer dissects an amphipod to remove the animal’s gonads, which she will study later to investigate how cellular processes change with depth. (Photo by Ken Kostel, Woods Hole Oceanographic Institution)

There are many versions of a story in which a scientist is confronted by someone who claims that that the universe is nothing more than a flat disc supported on the back of a giant tortoise. When the scientist asks what the tortoise rests on, hoping to highlight the logical fallacy behind idea, the person replies, “Everyone knows, sir, it’s tortoises all the way down.”

In the ocean, it’s amphipods. All the way down.

Amphipods are tiny crustaceans that inhabit almost every marine ecosystem, from beaches to the deepest parts of the ocean, and that fill a wide range of ecological niches. As a result, they are used as a model organism in efforts to study how life has adapted to the trenches and elsewhere in the ocean. Moreover, because they are both predator and prey in the deepest parts of the ocean, they also hold potential to tell us something about human impact far from the surface.

Every time one of the fish traps or landers went into the water on the cruise, they went in with sections of white PVC pipe lashed to it containing a piece of mackerel. Funnel-shaped caps with nickel-sized openings allowed amphipods in, but made it difficult for them to escape.

At the shallower depths, these have come up with only a handful of tiny amphipods, and video from the hadal lander has shown just a few buzzing around the baited end of the pole or swimming past the camera. As we descended, however, their numbers grew slowly until about 8,000 meters, immediately past the lower limit of snailfish, when their numbers suddenly exploded and they formed a seething pink cloud that completely obscured the bait. At 10,000 meters, they were less abundant, but were still the most common animal swimming past Nereus’ cameras. As we have descended, however, the diversity of amphipods in the clouds around our bait steadily declined to the point that the deepest samples have been dominated by one species.

It appears that amphipods can and do consume just about anything that falls to the seafloor, filling an important ecological function by recycling nutrients from even hard-to-digest material back into the environment. Japanese researchers have found microbes in the gut of hadal amphipods that can digest wood and our bait often comes back stripped clean in just a few hours, the bones polished. In the absence of any other food, they will even turn on themselves—we have found dead amphipods in our traps that were cannibalized by their cousins.

The size of amphipods we caught also increases with depth to about two to three centimeters on average, with one notable exception—the super-giant (Alicella gigantea), which we filmed swimming clumsily up to the bait at 6,500 meters and caught in the fish trap at 7,000 meters. Unlike the smaller, fast-moving amphipods, video showed the super-giant to be a slow-moving scavenger that stumbled into the bait, latched on, and gorged itself for hours. Although far larger than most of its cousins, the super-giant is not an oddity when seen from the perspective of the hadal ecosystem. It has simply evolved to fill a niche that, in shallower water, is similar to the one occupied by crabs and other large bottom dwellers.

Samples of amphipods from these depths help complete the picture of adaptations to pressures that fish and other organisms can’t tolerate. It could be that amphipods, because they reproduce faster, have simply evolved the adaptation sooner than fish, or it’s possible that vertebrates are incapable of living beyond the depth limit imposed by their cellular makeup and the pressure of the deep ocean. Analysis by Paul Yancey of TMAO and other osmolytes that help proteins fold under pressure will help begin to address that question and could even have an impact on us here on the surface—one osmolyte from a hadal amphipod is being investigated as a treatment for Alzheimer’s disease.

Amphipods could also tell us how far human activity has been able reach across the face of the planet. The deep ocean is one of the largest ecosystems on Earth. Even though it is far removed from the surface, material floating down from the surface is known to contain human-made contaminants that do not readily break down in the environment and that become locked in the fatty tissue of plants and animals. These contaminants gradually become concentrated in the food chain as organisms consume one another. Alan Jamieson will be studying amphipods collected on this trip from the deepest locations for signs of PCBs and PCBEs. He has already made a cursory examination of amphipods from the Kermadec Trench that he caught in 2012 and found that they had the same amount of PCBs as an earthworm collected in Scotland. A more detailed study would tell us if there is a direct connection between human activity and the deep-ocean trenches and would also give us a baseline from which to measure future changes—something that is noticeably lacking given current knowledge of the hadal zone.