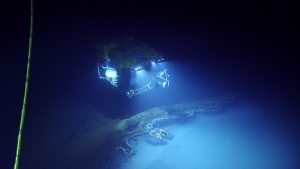 Research in the Wankel lab seeks to build a mechanistic understanding of the biogeochemical cycling of N, C and O, by asking how physical, chemical and biological drivers of elemental turnover are integrated and reflected in their natural abundance stable isotopic composition. A major focus of our work also aims to disentangle the complexity of overlapping zonation (“Redox Real Estate”) and interactions among elemental transformations along environmental gradients, including specific interactions with cycles of other redox-active elements such as sulfur (S), iron (Fe) and manganese (Mn). We are particularly interested in disentangling the relative importance of biotic and abiotic interactions, including contributions of specific groups of organisms (fungi vs. bacteria vs. archaea) driving N transformations. Therefore, we can be found studying N, C, and O cycling across a variety of marine environments, ranging from tropical coastlines to deep-sea ecosystems, with significant emphasis on dynamics of climatically active trace gases nitrous oxide (N2O), methane (CH4) and carbon dioxide (CO2). We are also continuously working to bring new and experimental tools to bear on these questions, including novel isotope systems and approaches as well as development of cutting-edge technologies for field deployment and underwater measurements. 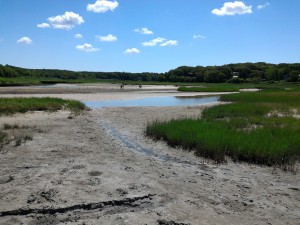 Atmospheric levels of nitrous oxide (N2O), one of the most radiatively important greenhouse gases, are steadily increasing. Yet predicting patterns of emission in natural systems remains highly speculative and very difficult. Marine ecosystems comprise a large component of the global N2O atmospheric flux, with coastal zones and estuaries being important contributors to atmospheric N2O. In the face of the widespread environmental change predicted to occur in global coastal ecosystems over the following decades, changes in N2O emissions have significant implications for climate forcing. Nevertheless there exists a wide range of estimates of N2O fluxes to the atmosphere and future projections of N2O production and emission are confounded by extreme spatial and temporal variability of biological sources and sinks (biogeochemical processes). We are working on innovative ways of improving our understanding of the dynamics and interplay of these processes and how they act to regulate N2O flux to (or from) the atmosphere. Central among these approaches are multi-element stable isotopic analyses of N2O and a variety of its precursors – including novel triple oxygen isotope and intra-molecular site preference measurements. 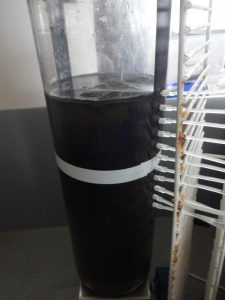 Our lab aims to quantify interactions between the N and those of redox metals (Fe and Mn) cycling in the sediments through a comprehensive examination of the biotic and abiotc interactions between NO3– (and NO2–) and Fe/Mn and their influence on the dual isotopic composition (e.g., δ15N and δ18O) of NO3– in the environment. Specifically, there is a fundamental discrepancy of coupled N and O isotope effects (18e:15e) between culture-based isotopic studies of denitrification and field-based isotopic measurements of groundwater NO3- loss under anaerobic conditions (in which denitrification has been widely implicated). This discrepancy may be related to the ubiquitous, yet largely unrecognized, coupling of abiotic and/or biotic Fe cycling with both reductive and anaerobic oxidative N cycling pathways. Work has focused on characterizing abiotic reduction of NO3– and NO2– by ferrous iron (‘chemodenitrification’) in a variety of binding contexts – including aqueous iron (complexed and uncomplexed), mineral surface bound iron, iron oxy-hydroxide minerals and iron bound in common clay minerals. Results suggest rapid reduction under some conditions and high levels of N2O production – linking these processes to the production of climate dynamics especially in nitrogen/iron rich environments such as coastal and shelf sediments. A more recent isotopic study of ours demonstrates how ligand-bound Mn(III) may play a role in the abiotic oxidation of nitrite to nitrate – even under functionally anoxic conditions (NSF Low Temperature Geochemistry and Geobiology)

Nitrogen Cycling in the Deep Biosphere 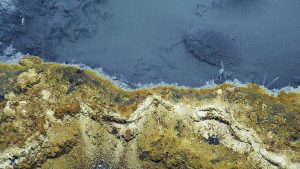 Nitrogen (N) is a key component of fundamental biomolecules. Hence, the cycling and availability of N is a central factor governing the extent of ecosystems across the Earth. Although hosting the largest habitable environment on the planet, the deep marine biosphere, including those environments below the seafloor in sediments and within the ocean crust, remain poorly understood – in particular with respect to the sources and cycling of nitrogen that sustain these microbial communities.

In the ocean crust – warm fluids move quickly through permeable basalt – allowing the delivery of nutrients and electron acceptors and donors necessary for sustaining life. We are collaborating with several groups that are sampling crustal fluids in a variety of contexts (hydrothermal vents, off-axis boreholes, volcanoes etc.) in order to better understand the nature of nitrogen transformations in these under-explored reaches of our planet.

In the organic-lean sediment porewaters underlying the vast expanses of the oligotrophic ocean, where low levels of microbial activity persist despite limited organic matter delivery from overlying water, the extent and modes of nitrogen transformations have not been widely investigated. We are interested in determining what nitrogen sources are available and what nitrogen transformations and metabolisms are active in these remote and ‘extreme’ environments. To answer these questions, we have been measuring the N and O isotopes of nitrate and nitrite in porewaters of the North Atlantic and developing a predictive reaction-diffusion model for constraining rates and modes of key nitrogen transformations. Our findings indicate that the production of organic matter by in situ autotrophy (e.g., nitrification, nitrogen fixation) supplies a large fraction of the biomass and organic substrate for heterotrophy in these sediments, supplementing the small organic matter pool derived from the overlying euphotic zone. (Center for Dark Energy Biosphere Investigations) 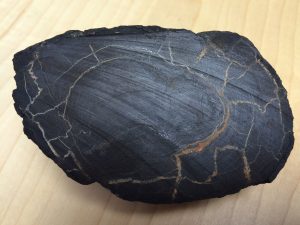 Manganese oxides are extremely common and geographically widespread in marine environments, exceeding 50% coverage of the seafloor in some abyssal regions of the global ocean. Manganese(II) oxidation by O2 can be facilitated by biological or abiotic processes, including enzyme catalysis, surface and ligand complexation, or reactive oxygen species (ROS) of various origins. Lead by JP student Kevin Sutherland, our study of synthetic manganese (Mn) oxy(hydr)oxide minerals suggests they capture and retain oxygen atoms from dissolved O2 during oxidation of aqueous Mn(II) to insoluble Mn(III/IV). We have also investigated the nature of the oxygen isotope composition of naturally occurring manganese oxides as a recorder of oxidation mechanism and oxygen source composition. Our results have shed light on dissolved oxygen signals captured in ferromanganese crusts, their formation and diagenesis, as well as connections to the global oxygen cycle (NASA Exobiology). 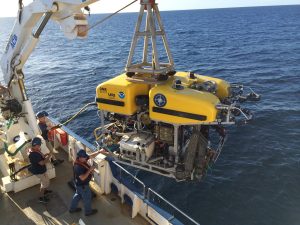 Towards the goal of improving our understanding of the role of the deep ocean in global biogeochemical cycling, we are actively developing in situ chemical and isotopic analytical instrumentation that can be used for making in situ measurements at depth. We use a range of technologies including in situ mass spectrometry and in situ laser spectroscopy for detecting and quantifying active microbial cycling of key compounds including molecular hydrogen, methane and carbon dioxide and reactive oxygen species. We regularly work with WHOI engineering teams to refine these technologies – deploying them on a variety of submersible platforms including the ROVs Ventana (MBARI), Jason (WHOI), SuBastian (Schmidt Ocean Inst) and Hercules (Ocean Exploration Trust) as well as the human occupied vehicle DSV Alvin (WHOI). (NOAA OER, Ocean Exploration Trust, NSF-Ocean Technology and Interdisciplinary Coordination)

Although hydrothermally hosted transformations of nitrogen-bearing compounds have been shown to play potentially central roles in the production of pre-biotic compounds on early Earth and possibly other planets, the mechanisms at work and controls thereupon remain unclear. Furthermore, despite the widespread use of stable nitrogen isotopic composition for distinguishing among N sources and reaction pathways, a comprehensive understanding of the underlying stable isotope systematics of these transformations under hydrothermal conditions is sorely lacking. Specifically, the reduction of oxidized nitrogen compounds such as NO3–, NO2– and N2 to the reduced form NH4+, although shown to be viable reactions under sufficiently reducing conditions, may occur as either unidirectional reactions where kinetically uninhibited or as equilibrium reactions driving composition toward an equilibrium isotopic distribution. (NSF Marine Geology and Geophysics)