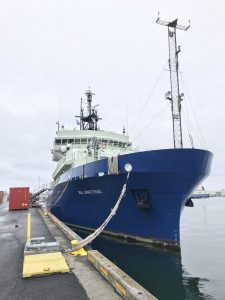 RV Armstrong docked in Reykjavik, Iceland; our home sweet home for the next three weeks.

Blind people who use a smart phone are likely taking advantage of one of the most important new technologies of the past couple of decades, that is, the Global Positioning System (GPS for short). What is the GPS anyway? The GPS is a large number of satellites orbiting the Earth that allow you to find your location anywhere—whether you are sailing across the ocean, hiking the Appalachian Trail or walking the streets of New York City. A smart phone has a special receiver that can pick up the signals from the GPS satellites and give you your latitude (north-south position) and longitude (east-west position) to an accuracy of a few feet. This information is often then used to display where you are on a map.

Blind people can use a GPS and an accessible app on a smart phone to navigate around their neighborhood, through an unfamiliar city—just about anywhere outside where the phone has a view of the open sky. But what about indoors? GPS doesn’t work reliably inside buildings.  People with vision can read signs, telling them where the rest rooms are, what office they are going into, where is baggage claim. But what is there to help blind people navigate indoors?

A new method for indoor navigation for the blind is becoming more popular, and I’m trying it out for the first time on board the R/V Armstrong (Photo above). Basically it involves using a smart phone to read bar codes posted on the wall next to doorways (Photo below). 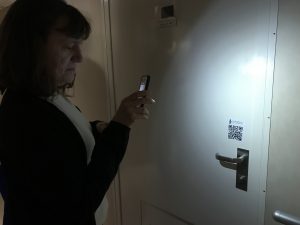 Amy using a QR code label to find her cabin.

These aren’t just any barcodes though – they are QR codes, the most widely used two-dimensional coding system (see more information about QR codes on Wikipedia at https://en.wikipedia.org/wiki/QR_code#History). They were invented in 1994 in Japan to track parts in automobile manufacturing. A lot of information can be stored in these codes, and they can be easily scanned using the camera on a smart phone. So, this is how I set up a basic indoor navigation system for the R/V Armstrong using QR codes.

I called the people who developed BlindSquare, an app like Four Square but for blind people. I told them what each QR code needed to say. Examples are “Galley”, “Mess Deck” (the dining room on a ship), “Main Lab”, and “Rest Room”. They then made sticky labels with QR codes (Photo below left) that, when scanned with the QR code reader that comes with the BlindSquare app, read out loud whatever is coded on the label. 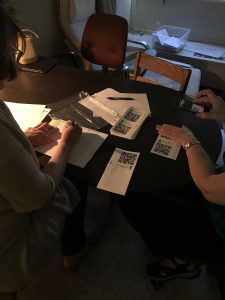 Amy setting up QR codes names before going to sea.

A second level of information can also be programmed into the code, like where is the sink inside the rest room. I have begun putting these labels up around the Armstrong to help me navigate around inside the ship. It’s pretty cool! (Photo below right) 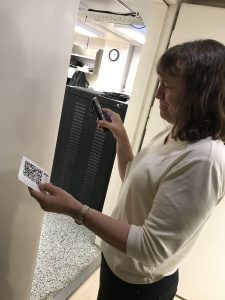 Amy checking a QR code label before mounting it to the wall.

Why not use braille labels? Well, I could have done that too. However, what is different with the QR codes and BlindSquare is that the message “attached” to each label (that is, what BlindSquare will say when the label is scanned by anyone running BlindSquare on their smart phone) can be changed without peeling off the label or putting up a new one. The message associated with each label is stored online (“in the cloud” as some like to say), so a simple change to the message database can be made whenever the label message needs to be changed. This is much easier and cheaper than sending someone out to where a braille label might be, taking it off and putting a new one there. For example, the signs on many public restrooms are being changed from “Men’s Restroom” and “Women’s Restroom” to “Unisex Restroom” or “Gender-Neutral Restroom”. With a QR code label, this change can be made without doing anything to the physical label.

After a few days on board, I’ll probably have mostly memorized where the important labs and stairways are, but in the meantime, I’m able to independently tour around inside the ship on my own and figure out where everything is. I’m hoping that we can install a similar indoor navigation system soon back at WHOI.