After pulling into Reykjavik, Iceland on June 24, formally bringing to a close our research cruise to the Irminger Sea, I had a chance to do some touring around the city and nearby natural wonders with shipmates Heather, Hilary and Alison. We rented a car for the day, and our first stop was a national park that I’ve been wanting to visit ever since my first visit to Iceland in 2005. It’s called Thingvellir (http://www.thingvellir.is/english.aspx). Only about a 45-minute drive from Reykjavik, it is like a moonscape. Iceland has very few trees as it is, but this park has almost none. The reason I wanted to visit is because I think geology is the next best thing to oceanography, and this park is the site of a major boundary between two of Earth’s giant tectonic plates, the North American and Eurasian plates.  Some of the plates covering the Earth’s surface are pushing together, causing many earthquakes. This is what is going on along the west coast of the US.  Other plates are very slowly pulling apart, and a rare opportunity to see this in action can be had in Iceland.

Most of the boundary between the separating North American and Eurasian plates is deep down in the Atlantic Ocean, and called the Mid-Atlantic Ridge. For years I’ve been studying the deep ocean currents that flow in and out and around this underwater mountain range, but in Iceland, the splitting of the plates is in full view. Visitors can walk down into the rift between the two plates, and witness (by sight or touch) the wild swirls and columns of rock that were once molten lava. Although I couldn’t see the scale of the area very well, just being able to walk down into the chasm between the two plates gave me a sense of it 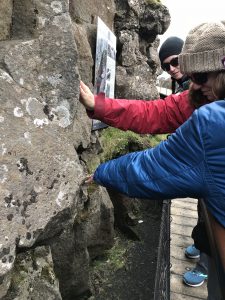 Amy (in red), with Hilary and Alison, descends a boardwalk located between the Eurasian and North American Plates. She is reaching out at touching the western edge of the Eurasian Plate.

and the place had a very earthy aroma too. A highlight was a large three-dimensional map of the region, about the size of a pool table, which I could explore with my hands to get a better idea of the shape of the landscape. 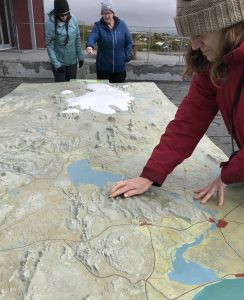 Amy gets to know Iceland by touch using an elevation map of southwestern Iceland, which includes Thingvellir (yellow dot on map), while Hilary (black hat) and Alison (gray hat) learn about it by sight.

Our second stop was just as amazing:  it was the Gullfoss waterfall (http://gullfoss.is/). A far-away glacier feeds this powerful plunging mass of water that rivals Niagara Falls in the US. I could just make out the foamy white of the crashing water, but way more “in my face” was the heavy mist thrown up by the tumult. It was a good thing we were all decked out in raincoats because it was like being in a light rain storm! And the roar of the waterfall was loud enough that we had to raise our voices to be heard.

Unlike in the US, the path along the edge was not lined with a chain-link fence or something similar, but a simple rope strung between posts. One false step (well, a major big step), and it might be over the edge for you! 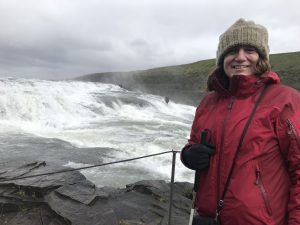 Amy is all smiles at the end of the trail, with Gullfoss in the background. This waterfall is fed by glacial melt, which gives the water a cloudy appearance. If it were a clear day, the glacier would be visible just to the left of the photo frame.

That made the visit all the more exciting. Some of the terrain along the path was rocky and slippery from the mist, but my terrific shipmates gave me a helping hand over the rough patches. One of our group had visited in winter, and the path we walked was covered in ice and closed to visitors at that time of year.

Reykjavik  itself offers some non-visual  sensory treats.  One is a sculpture garden (http://www.lej.is/en/museum/garden/) near Hallgrimskirkja,  Iceland’s most famous church, and sixth tallest building at 74 meters (about 225 feet). The sculptures, all by artist Einar Jónsson, scattered through the garden were both three-dimensional, and bas relief, and most within range of my hands. 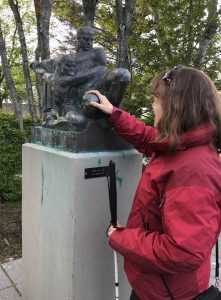 The bronze sculpture ‘The Wrestlers’, by Einar Jónsson, stands among many others by the same artist, in a walled garden in the center of the capital city.

They depicted fantastical  human forms with many details to explore tactilely.

And then there was the World Cup soccer match between Iceland and Croatia.  Jumbo-tron screens were set up in every town square and park for crowds of people to watch the match together—so much more fun for everyone than sitting at home with the small screen. We caught up with the crowd in the central square of Reykjavik just at the beginning of the second half. The crowd went wild, throwing beer in the air and shouting the Viking chant when Iceland tied the score, 1-1. Sadly for Iceland, Croatia scored the winning goal with just minutes to go in the game.

After applauding a game well played by their national team, the Icelanders filtered out of the square to cry in their beer.

Just as the Icelanders dispersed after the soccer match, the scientists from Armstrong cruise AR30-03 have scattered to the wind, returning home to family and friends. The cruise was a complete success thanks to a strong effort by everyone on board, from cook to captain and chief scientist to engineer. The OOI team will be back again a year from now for the sixth visit to the OOI Irminger Sea Array, more or less repeating the mooring recoveries and deployments carried out this year. The OSNAP moorings will remain undisturbed, silently recording the temperature, salinity and currents of the Deep Western Boundary current, until 2020, when the OSNAP team will once again join the OOI group for a joint cruise.