Irminger Rings in the Labrador Sea

On this research expedition Amy traveled north to part of the north Atlantic Ocean called the Labrador Sea, which lies between Canada and Greenland.  She traveled 1700 nautical miles (1956 land miles) over almost seven days to reach her work site.

Amy and her team used latitude and longitude, imaginary lines that can be used to define any spot on earth (even in the ocean) to figure out where to travel to arrive at the location with the latitude 60.6 degrees North and the longitude 52.4 degrees West.  Her goal was to learn about how currents of ocean water flow around and near this spot.  She especially wanted to learn about parts of currents that break free and move through the sea on their own.  Oceanographers call these eddies or rings.  The specific name for the eddies in Amy's work area are Irminger Rings, since they broke free from the Irminger current.

Water in the ocean is always on the move, with big currents flowing like rivers in different directions and at different layers in the sea. These ocean currents help carry heat around the Earth. In the Atlantic Ocean, near the equator, the water on the surface gets warm from the sun. The warm water flows toward the north as a big current, called the Gulf Stream, and it carries heat north with it.

Meanwhile, in the Labrador Sea in winter, the cold air from Canada cools the water at the ocean’s surface down to near freezing, like placing a pan of warm water in the refrigerator. The cold surface water is now denser and heavier than underlying water, so it sinks down—through warmer layers of water—to the sea floor. Then the cold dense water flows back southward along the bottom of the ocean - underneath the current of warm water going north - back toward the equator. The water makes a big loop: getting warm at the equator, flowing north at the surface, getting cold in winter, sinking, flowing south back to the equator, rising up and getting warm again.

In this way, the cooling of the ocean in the Labrador Sea in winter helps keep all the seawater moving around the Atlantic Ocean. Such winter sinking of cold water only happens in a few places in the world, and we think they are important for the whole Earth’s distribution of warmth.

Amy wanted to find out more about the currents of warmer and cooler water in the Labrador Sea. In one specific area, a current of slightly warmer water flows around the outer edge of the sea without mixing into the cold water in the center of the sea - a little like a warm breeze flowing past a cool, quiet, shady courtyard but not coming in. Once in a while, though, a bit of the current breaks away from the main flow and carries a blob of spinning, warmer water into the center of the sea - a little like a stray swirl of wind coming into the courtyard. These are called “Irminger Rings.”

What happens to warm eddies in the cold center of the Labrador Sea? Where do they go? Do they fall apart? Do they stay warm for a long time? These are some of the questions Amy's team researched using the measuring and recording instruments put into the Labrador Sea on this expedition.

It isn’t easy to measure one a swirl of warmer water within a sea of colder water - Amy had to use sophisticated programmed instruments to gather data.  Some instruments were attached to a mooring, and stayed in one place for two years, recording the temperature of water that moved by -thereby detecting the Irminger Rings going by. Amy's other instruments were released as 12 small floats that drifted with the warm eddies.

Oceanographers think that these eddies might carry just enough warmth to the interior of the Labrador Sea to keep it a little warmer than the winter-chilled dense sinking water. And it’s a good thing, too! Because if the whole sea got too cold and dense, there wouldn’t be any more sinking water, and the circulation loop in the Atlantic Ocean might not happen, and the warmth from the equator might not be carried north with the Gulf Stream. 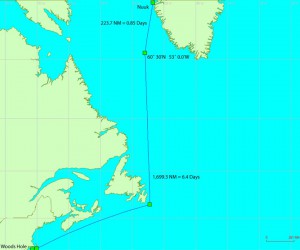 The blue line shows the route the ship will take to travel from Woods Hole to the work area in the Labrador Sea. (Map by John Dyke, Woods Hole Oceanographic Institution) 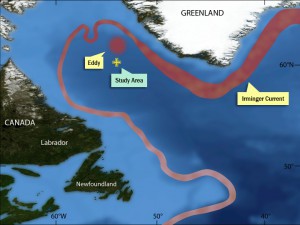 The red band shows the Irminger Current. The red circle shows a well-formed Irminger ring. The loop at the top of the current shows another ring that is about to break free from the current. The yellow cross marks the mooring location. (Illustration by Jack Cook, Woods Hole Oceanographic Institution)

WHOI is the world's leading non-profit oceanographic research organization. Our mission is to explore and understand the ocean and to educate scientists, students, decision-makers, and the public.
OceanInsight
Copyright © 2023 All Rights Reserved
Privacy Policy.
Problems or questions about the site, please contact webapp-support@whoi.edu