With the offer to give Jason a quick spin on the seafloor I promptly replied, “I was very good at computer games as a child so I’m sure I’m not going to destroy the Jason!” Was this welcome news for the Jason operations team? I’m not so sure…

Piloting Jason was partly like playing a computer game and partly like using a flight simulator. But driving Jason is especially dynamic and challenging because the driver has to coordinate with two other engineers to move the ship and monitor Jason’s tether to its partner vehicle Medea and the boat.

Jason weighs about 5000 kilograms, yet is able to hover and move in all directions on the seafloor just like a helicopter in the air. I was tasked with the job of traversing laterally (i.e., moving to the side while facing a hill) while looking at the rocks. The outcome of my driving time was that I didn’t bump into anything, but I was about 45 degrees off the planned direction! 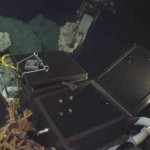 Jason holds a rock sample up before placing it into the collection basket. 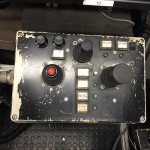 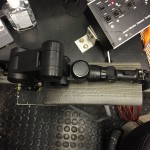 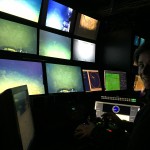 Jason can not only move around in any direction, but can also sit on the seafloor or hover in mid-water and use its manipulators to pick up rocks and our measuring equipment. The manipulators work like a human arm, with joints that permit separate movement of the upper or lower arm. Jason has a shoulder, elbow and wrist joint, but unlike the human arm Jason’s hand can spin continuously. This is of real benefit when we need to drill into volcanic deposits with our corers. The joystick for the manipulator arms is a miniature replicate of the real manipulators – so its relatively quick to adapt to. Using the manipulators was really fun – the idea that I was moving the Jason’s arms at more than 1000 meters (about half a mile) below sea level was aweing.

One significant benefit of driving Jason was realizing just how skilled the ROV pilots are. It has helped me to plan missions and sampling tasks while on the seafloor to make operations easier for the ROV pilots.