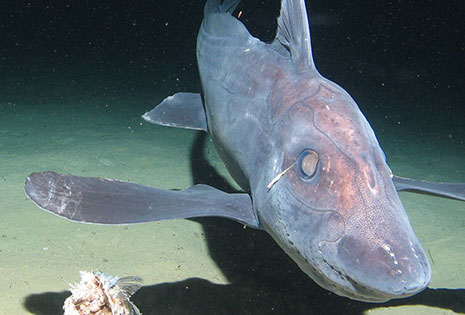 One mile. One thousand five hundred meters. Less than one-sixth the distance to the seafloor at our deepest dive site. That’s how far our landers, fish trap, and elevator went on the test dive we completed today just off the coast of New Zealand. Big deal, right? 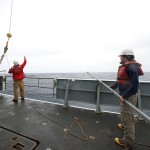 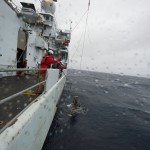 The hadal lander is lifted to the deck of R/V Thomas G. Thompson after a test deployment to 1,500 meters. (Photo by Ken Kostel, Woods Hole Oceanographic Institution) 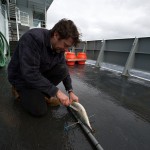 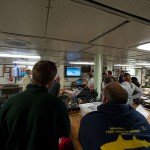 The science team gathered in the main lab on the Thomas G. Thompson to see a best-of selection of photos and videos from Jamieson’s landers. (Photo by Ken Kostel, Woods Hole Oceanographic Institution) 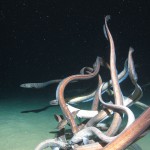 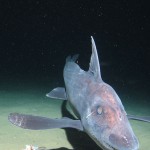 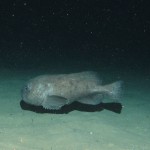 For those who spend most of their time studying the deepest places in the ocean, perhaps not, but for many of those on the ship who spend most of their time in the lab, today’s results were a brief glimpse into the alien world where their samples originate. And to be honest, even those who do go looking in the deepest places were mesmerized by what they saw.

It all started yesterday with the recovery of a fish trap that went in the water earlier in the morning. Fish traps usually don’t stay in the water long because of the possibility for animals in them to begin eating each other. When we recovered the trap Saturday morning, it contained just two amphipods (small crustaceans related to sand fleas found on beaches around the world) and a basketwork eel, not because they’d made breakfast of their friends, but because that’s just the way it goes sometimes. Anyone who has been fishing will understand—you can’t be lucky with every cast.

The trap and photo and video landers were baited with mackerel to attract animals looking for a meal. We’ll send video to shore soon that shows how quickly animals move in (and how many) as soon as word gets around. It was once thought that the lack of food would be a limiting factor on life the deeper one looked.

As we progress to deeper sites, we will likely reinforce how wrong that assumption turned out to be and that there is, in fact, an abundance of life in even the deepest places. At our next dive site, however, things might prove to be a bit different. “We’ll see the same feeding frenzy, just the types of fish will change,” said biologist Alan Jamieson from the University of Aberdeen.

Who’s there?
From 1,000 to 2,000 meters, basketwork and snubnose eels appear to dominate the scrum, with an occasional appearance by a shark to help break up the fish carcass for the weak-jawed eels. Below 3,000 meters, eels and sharks disappear and rattails dominate; from 5,000 to 6,500 meters, cusk eels should be most numerous; and from 6,500 to 7,500 meters, snail fish will likely be most prevalent. But these are just the mobile animals that are attracted to the bait. There are almost certainly large numbers of animals not lured in by the smell of mackerel in the water and even sessile (immobile) animals such as anemones that live in the trench. That’s where Nereus will help fill in some of the blank spots in our knowledge of what else lives down there. The combination of stationary traps and cameras plus the collection and imaging capabilities on the vehicle will allow the team to do the first truly comprehensive survey of what lives down there despite the paucity of food and what else they might be feeding on.

The amphipods tell a different story about adaptation to the deep ocean. Another reason animals shouldn’t exist there is that life is dependent on certain biochemical reactions that rely on certain proteins changing shape in specific ways. If the proteins have to increase in volume to do so, then water pressure at depth should limit their ability to function. “It’s like blowing up a balloon underwater,” said University of Hawaii biologist Jeff Drazen. “It gets harder the deeper you go.”

Proteins under pressure
The key appears to be a group of organic molecules known as osmolytes, which, among other things, help regulate water balance in cells. A subset of these, piezolytes, was first described by Paul Yancey, a biologist at Whitman College in Washington state who is also on the cruise with us. Piezolytes appear to prevent water molecules from being trapped under pressure around a protein. In addition to this mechanism, some proteins have simply adapted to be able to function under pressure without the protective shell of piezolyte. The question many deep-sea biologists are trying to answer is what combination of protein adaptation and biochemical boost is responsible for life being able to adapt to the most extreme conditions of the deep ocean.

Because they are found from the beach to the deepest trenches, amphipods present an ideal model for scientists to compare evolutionary changes in related species over increasing depths. But the field is so new and the questions so recently formed that there aren’t many examples of amphipods at intermediate depths and every new specimen, such as the two we raised yesterday, seems to raise as many new questions about life in the deep ocean as it might answer. For example, amphipods appear to have more fat the deeper they are found. “But we don’t know what that means yet,” said Yancey. “No one has really done this before.”