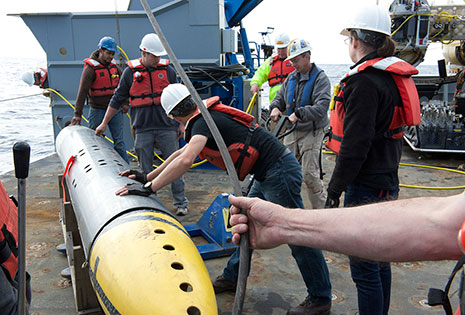 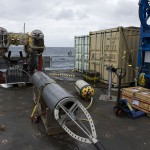 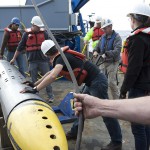 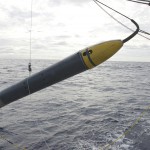 The depressor and float pack are launched first from the stern of R/V Thomas Thompson. (Photo by Ken Kostel, Woods Hole Oceanographic Institution) 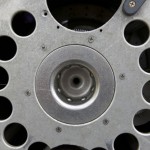 We are being brushed by a storm on the other side of New Zealand, but out here, even the edge of a storm is enough to make a difference in our lives. Most of our work is halted while the waves build to an expected 20 to 25 feet by this evening. A few people are taking advantage of the relative lull in this morning’s 8- to 10-foot swells to get a few last jobs done out on the fantail. Then we close everything up and wait for the weather to change for the better.

Nereus is lashed to the deck, a literal and figurative fish out of water. It was built to dive, and it looks out of place on the surface. Even hanging from the crane, it looks like a racehorse in the starting gate, twitching to run.

Like space exploration, remote observation of the ocean requires significant technical expertise. Nereus exemplifies this. It was funded by the National Science Foundation, with additional support from the National Oceanic and Atmospheric Administration and NASA (think inner space) in response to the question of what the U.S. ocean science community would need in order to answer the kinds of questions they saw as most pressing over coming decades. To fully answer the question, however, scientists and engineers had to reconsider how an underwater vehicle operates and is designed.

A long, long leash
For one thing, the tether connecting Nereus to the ship is unlike that of any other remotely operated vehicle (ROV). Most ROVs use a heavy, armored cable that provides power to the vehicle and relays data and imagery between the vehicle and the surface. The trouble is, beyond about 7,000 meters in length, such a tether will likely break under its own weight. In addition, electrical voltage decreases the farther it travels (similar to the way a leaf blower won’t work as well on a 500-foot extension cord as on a 50-foot cord).

So when the plans were first drawn up for a vehicle that could reach full ocean depth and do useful work there for extended periods of time, two things quickly became apparent: It would need to rely on battery power and it would need an entirely new type of tether. The theoretical solution to the first was fairly straightforward, at least in relative terms: The design team packed the vehicle with 16 kilowatt-hours of lithium ion batteries, or the equivalent of about 160 laptop batteries.

The tether was a different matter. A team of Japanese engineers solved part of the problem when they built a deep-diving ROV by fashioning a super-reinforced tether. This, in turn, required a winch that was so large they essentially had to build an entirely new ship just to hold it.

Instead, engineers at the Woods Hole Oceanographic Institution went the other direction—they made a tether out of optical fiber that is as thin as a human hair. The advantage of this is it can be almost any length, which frees the vehicle to travel up to 40 kilometers (25 miles) from the ship. As a traditional ROV begins to move horizontally, its support ship has to constantly reposition in order to keep the vehicle within a fairly tight cone beneath it. When we deploy Nereus, the first thing to go over the side is the depressor, an instrument-filled package that, on our cruise, will descend to 3,000 meters. At the front of the depressor is a detachable section known as the float pack. On either side of the separation point are two canisters containing 20 kilometers (12 miles) of optical fiber, which spools out as the vehicle towing the float pack continues to descend. During descent, the depressor also helps isolate the motion of the ship from the fiber, float pack, and vehicle.

Floating the boat
The other major advance (there are actually many more) that allows Nereus to get to the bottom of the Kermadec and any other trench on the planet is its flotation. That may seem counter-intuitive for a vehicle that has to sink all the way to the seafloor, but in fact one of the worst designs for something that has to reach the seafloor and then do work down there is one that is too heavy. The Nereus team attaches weights to the vehicle before launch, but those only help it reach the bottom quickly. Once there, it releases the descent weights and, if the team has done its work carefully, the vehicle will then become neutrally buoyant in the water so that it will float in the water at depth and does not have to expend its limited battery power using its thrusters to keep it from rising back to the surface or from sinking into the mud.

Vehicle designers have traditionally used a material known as syntactic foam to offset the weight of the frame, scientific instruments, and other equipment (thrusters, lights, etc.). Syntactic foam is made of tiny hollow glass spheres embedded in an epoxy. It is extremely stable under extreme pressure, but when Nereus was built, foam that could withstand 16,800 pounds per square inch was far too expensive for use on the vehicle. Ceramics have the advantages of being extremely lightweight, but extremely strong. By packing the frame with hollow ceramic spheres (the strongest shape for something subjected to extreme pressure), they are able to offset the weight of the rest of the vehicle and achieve neutral buoyancy at depth. One of James Cameron’s biggest breakthroughs in designing the DEEPSEA CHALLENGER more than five years later was to develop an inexpensive full-ocean-depth syntactic foam.

There were many other technical achievements that make Nereus possible (and make it possible to do scientific research in the deep ocean), and we’ll touch on more of those in later posts. The only technology the engineers were not able to perfect was a weather machine, so for now Nereus remains lashed to the deck waiting for the next opportunity to do what it was designed to do.