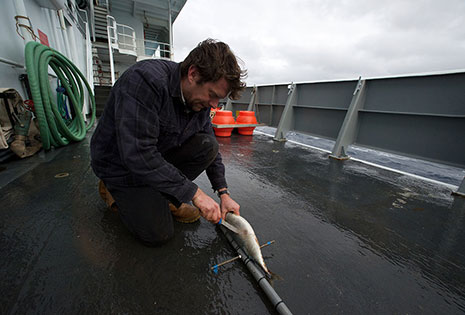 University of Aberdeen biologist Alan Jamieson prepares bait for a lander, a device he uses to lure deep-sea fish within range of a camera. (Photo by Ken Kostel, Woods Hole Oceanographic Institution)

Alan Jamieson, biologist from the University of Aberdeen and author of the upcoming book The Hadal Zone, provided his Top 10 Random Trench Anecdotes:

1. The boss. The term “hadal” comes from “Hades,” which refers both to the Greek kingdom of the Underworld and the god of the Underworld himself, Hades (son of Cronus and Rhea and brother of Zeus and Poseidon). According to myth, the three brothers defeated the Titans and claimed dominion over the Underworld, air, and sea, respectively. The term can also be loosely translated as “the unseen,” “abode of the dead,” or “the dominion of Hades.” In modern days, Hades is seen as evil, but in mythology he was often portrayed as more passively angry than actively malicious. It is interesting to note that, although he was also once considered more altruistic than he is now, he was known to strictly forbid the inhabitants of his dominion to leave, which is a rather apt analogy for hadal fauna, as the species inhabiting hadal depths are often confined to one or more trenches and rarely capable of leaving. Hades was also renowned for his overwhelming wrath towards anyone who tried to leave, which might be analogous to the effects of decompression on organisms specifically adapted to high pressure if they are removed from the trench. 2. Depth obsession. The extreme depths of the hadal trenches were discovered using “bomb sounding,” whereby someone threw a half-pound block of TNT off a ship and the echo of the explosion off the seafloor was recorded on board the ship via a transducer amplifier. This method was used to sound the depths of the Middle America, Tonga, Peru-Chile, Japan, and Mariana trenches, but the exact depth of the deepest point in the ocean, currently located in the Mariana Trench, is rather difficult to determine. Since 1951, it has been measured by researchers from Britain, the U.S.S.R., Japan, and the United States with results that vary from a minimun depth of 10,599 meters (34,774 feet) to a maximum of 10,971 meters (35,994 feet). On March 24, 1995, the Japanese ROV Kaiko descended to 10,911 meters (35,797 feet) and placed a plaque to mark the trench as the deepest point on Earth. Four other trenches also exceed 10,000 meters in depth: the Tonga, Kuril-Kamchatka, Philippine, and Kermadec. The important thing is not the exact depth or which is the deepest, but the fact they are really deep.

3. Knockin’ on Hades’ door. The HMS Challenger expedition from 1873 to 1876 was the first to physically sample the hadal zone, when members collected a small sediment grab at about 8,000 meters (about 26,000 feet) in the Japan Trench. They were unsure if the organisms in the sample were from the bottom or were the dead remnants of shallower animals. In August 1901, an expedition on the Princess-Alice successfully trawled specimens of urchins, seastars, brittlestars, and fish from 6,035 meters (19,800 feet) in the North Atlantic. However, it was the 1948 Swedish-led expedition on the Albatross, which successfully trawled a variety of benthic species from 7,625 to 7,900 meters (25,016 to 25,919 feet) in the Puerto Rico Trench, that proved unequivocally that life exists well beyond 6,000 meters (19,685 feet). In 1956, the first photographs of the hadal zone were taken by Jacques Cousteau on the manned submersible Calypso at 8,000 meters (26,247 feet) in the Romanche Trough in the North Atlantic.

4. Hades’ real estate. The hadal zone comprises a series of disjointed trenches and other deep spots. In total there are 33 trenches (27 subduction trenches and 6 trench faults) and 13 troughs around the world—46 individual hadal habitats in total. The mean depth of the trenches is 8,216 meters (26,955 feet). The total area of the hadal zone—the total area deeper than 6,500 meters—constitutes less than one-quarter of one percent of the entire seafloor but accounts for 41 percent of the total depth range.

5. Trench specifications. Of the 33 hadal trenches and trench faults, 26 are located in the Pacific Ocean, three are found in the Atlantic Oceans, two in the Indian Ocean, and two in the Southern Ocean; 84 percent of all hadal habitat is found in the Pacific Ocean compared to 8 percent in the Atlantic and 4 percent in both the Southern and Indian Oceans. This is why we (Jamieson and company) collect so many air miles from Scotland. Most of the hadal trenches in their modern form, particularly in the Pacific Ocean, are believed to have formed 65.5 million years ago during the Cenozoic period and may have existed for 100,000,000 years or more.

6. We are nothing without subduction. Earth appears to be the only terrestrial planet with subduction zones and plate tectonics. Both Mercury and the Earth’s moon are tectonically and magmatically dead. Mars appears to have tectonically ceased and is now a single-plate planet, and Venus is dominated by thick lithosphere with mantle plumes. On Earth, subduction zones produce continental crust, which can protrude from the ocean (the continents). It has been speculated that without subduction zones the Earth’s solid surface would be submerged in the oceans and terrestrial life, including humans, would never have evolved.

7. The squeeze. The water temperature variation with depth is trench-specific but typical bottom temperatures vary between 1 and 4 C (34 to 39 F). Weirdly, pressure increases the temperature at a rate of about 0.16 C (0.29 F) per 1,000 meters (3,281 feet). This is known as the compressibility effect, which causes an “adiabatic temperature gradient” that does not become apparent until the temperature change with depth begins to level out around 4,500 meters (14,764 feet), after which the water begins to warm again, slightly. In addition to the low temperatures, hydrostatic pressure increases linearly by 1 atmosphere (atm) for every 10 meters (32.8 feet) of depth. Pressure is often expressed in megapascals (MPa) or bars (bar) and all are relatively easy to covert: 1 atm = 1 bar = 0.1 MPa = approximately10 meters depth. The pressure at hadal depths therefore ranges from about 600 to 1,100 atm (6,000 to 11,000 meters; 19,685 to 36,089 feet). The pressure at the deepest point is, therefore, equal to a 1-ton weight on the end of your finger.

8. Care in the community. Most marine organisms are represented at hadal depths and the most diverse and commonly sampled groups are the polychaetes (about 164 species), bivalves (about 101 species), gastropods (about 85 species), and holothurians (about 59 species). All of these groups are found at full-ocean depth and in most cases are found in large aggregations, particularly the holothurians. Contrary to popular media, the Hadal zone is not a mysterious realm inhabited by aliens or “monsters of the deep,” so much as it is a poorly understood region largely inhabited by hoppers, snails, worms, and sea cucumbers.

9.  Open up and say, “Ahhh.” In the 1970s, the Puerto Rico Trench was a pharmaceutical waste disposal site. The figures are astonishing: Between 1973 and 1978, more than 387,000 tons of waste material was discarded in the trench, an amount equivalent to 880 Boeing 747s. In addition, the ill-fated Apollo 13 mission to the moon in 1970 carried a SNAP-27 radioisotope thermoelectric generator (RTG) that was supposed to remain on the moon with the lunar lander. The RTG contained approximately 3.9 kilograms of plutonium-238, which was brought back to Earth when the mission was aborted. Mission controllers jettisoned the RTG over the Southwest Pacific, where it reportedly survived re-entry and settled in the Tonga Trench at a depth of 6,000 to 9,000 meters (19,685 to 29,527 feet). Based on the half-life of plutonium-238, it should remain radioactive for several thousand years.

10. Daylight savings. The 2011 magnitude (Mw) 9.0 Tōhoku-Oki earthquake off Japan was caused by a fault rupture in the Japan Trench. The event and subsequent tsunami left approximately 20,000 dead or missing and an area of about 560 square kilometres (216 square miles) across more than 35 cities along the coast of NE Japan inundated. The Japan Meteorological Agency observed 666 aftershocks that exceeded Mw 5.0. In order to truly understand the energy involved in such high-magnitude earthquakes originating in Hadal trenches, it is important to consider the following: The Sumatra-Andaman earthquake in the Java Trench caused a shift of mass and a sufficiently massive release of energy that it slightly altered the Earth’s rotation. Theoretical models suggest this shift shortened the length of a day by 2.68 microseconds. Similarly, popular media at the time reported that the Tōhoku-Oki earthquake shifted the Earth’s axis by between 10 and 25 centimeters, shortening the day by an additional 1.8 microseconds.