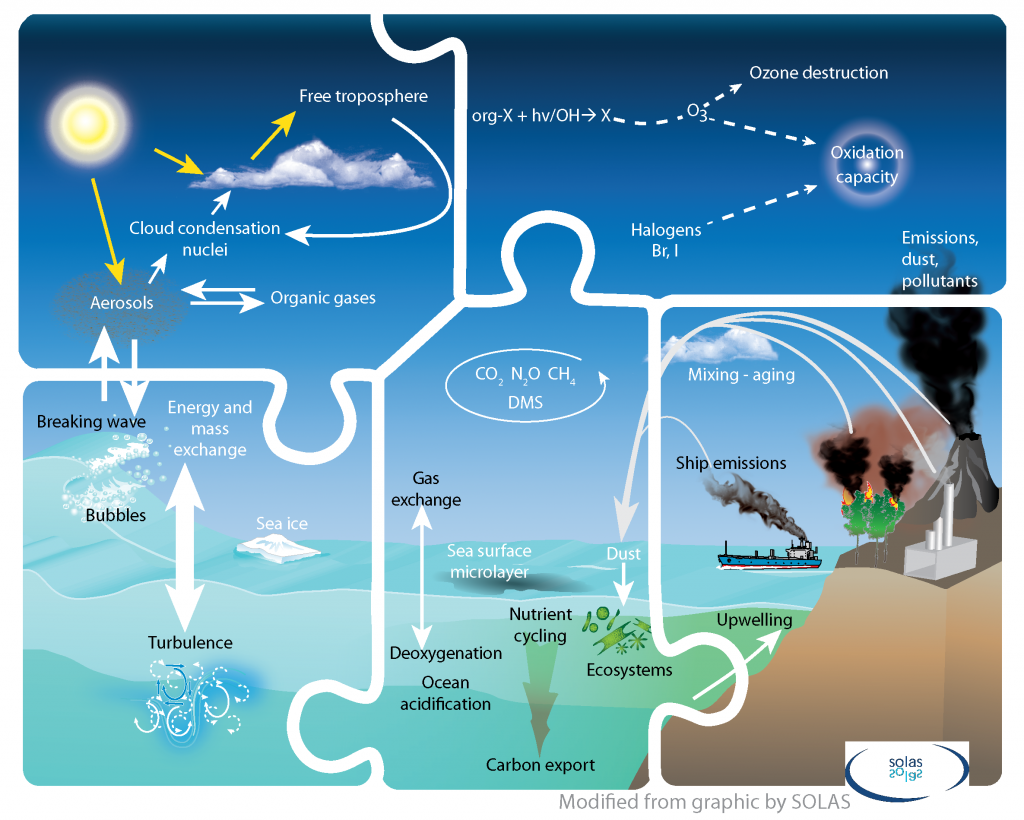 The interface between oceans and atmosphere represents over 70% of the planet’s surface area and a better understanding of this interface is key to our ability to predict heat exchange, biogeochemical cycling, and feedbacks in order to ascertain future climate scenarios. As Earth System Models (ESMs) evolve, new levels of understanding can be incorporated. This can include resolving high and extreme wind events, gas and aerosol exchange, as well as the impacts of large-scale oscillations such as ENSO, AMO, etc. These phenomena impact the lower atmosphere and surface ocean across scales and ranges that we have only begun to ascertain. These have clear and significant links to ocean carbon biogeochemistry.

SOLAS is an established international initiative aimed at increasing understanding of interactions between the ocean and atmosphere and linking such knowledge with climate and society. It focuses on this critical element of earth system science and overlaps extensively with a great deal of current U.S. research activity (e.g. NASA funded EXPORTS & NAAMES, GO-SHIP, NSF funded core atmospheric, polar, physical & chemical oceanography programs as well as OOI activities, NCAR and CAICE research, etc.). This demonstrates the strong interest and current priority in pursuing SOLAS science within the U.S. research community. Despite this activity, there is surprisingly little coordination between U.S. initiatives and the international SOLAS community. One of the goals of the OCB OAIC is to support the development of a strong, coordinated and connected U.S.

SOLAS community and the workshop represents a timely and important step towards achieving this goal.

The four over-arching science questions of SOLAS are all related to OCB science:

In particular, there is enormous overlap between OCB research priorities of ocean acidification, low O2 conditions, and carbon uptake and export with SOLAS science in the international plan. While identifying overlapping activity and interest is important, it is perhaps more critical to take stock of current U.S. priorities and build a U.S.-centric plan to participate in SOLAS science.