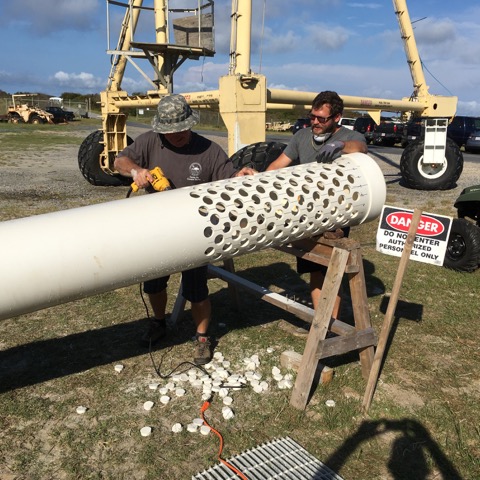 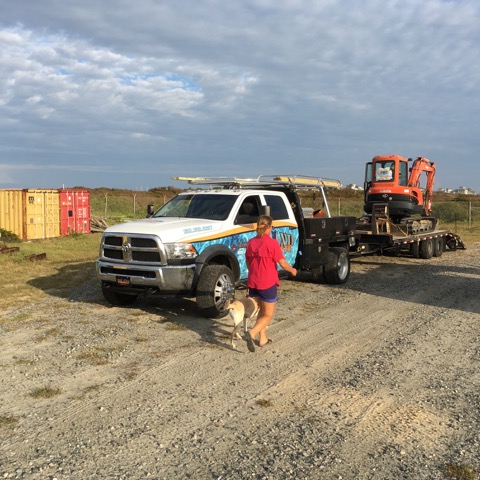 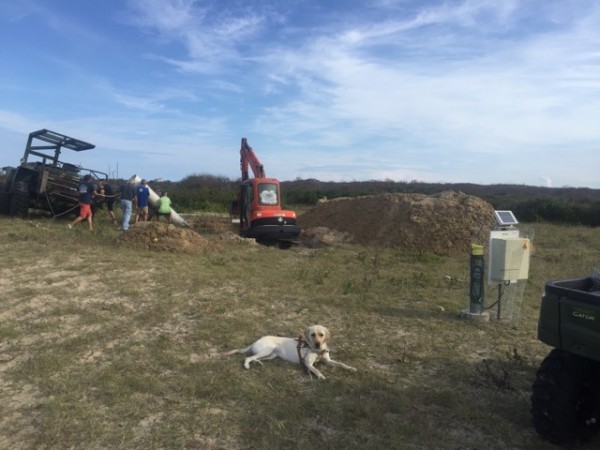 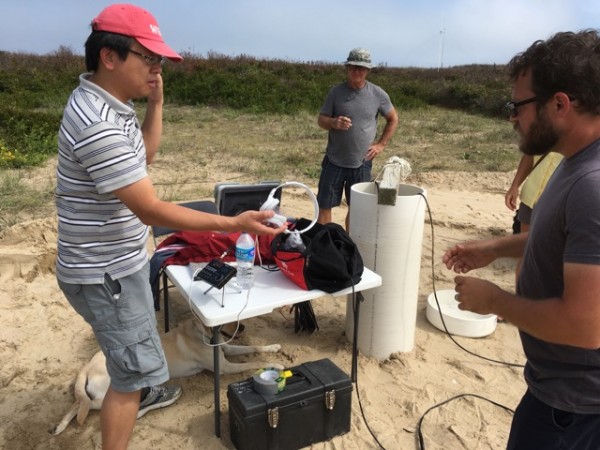 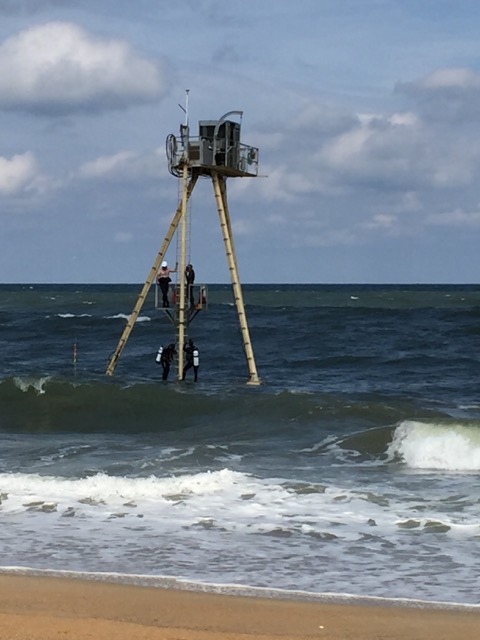 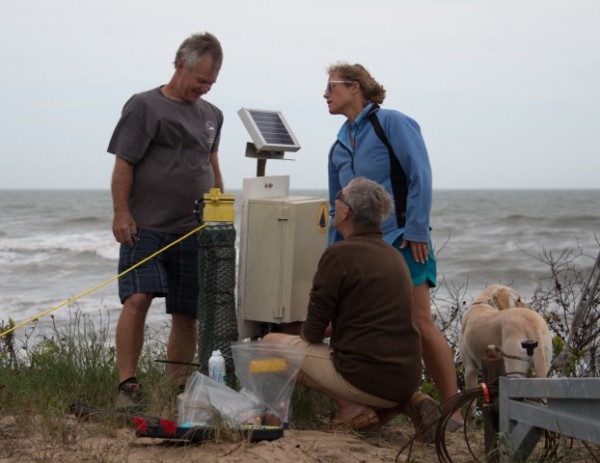 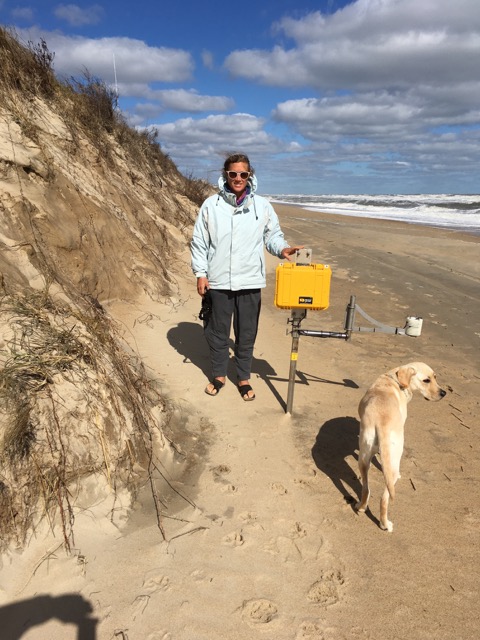 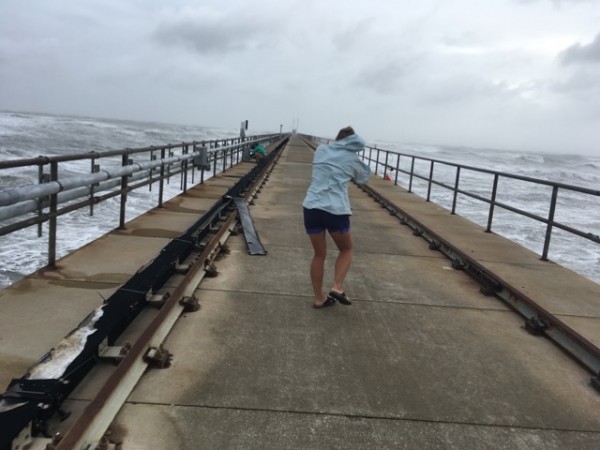 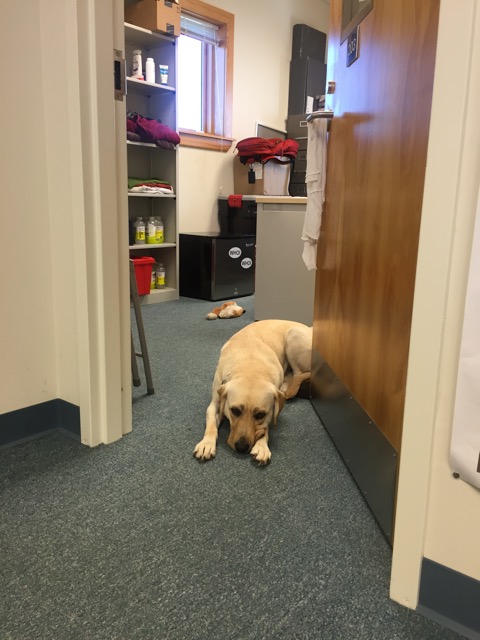 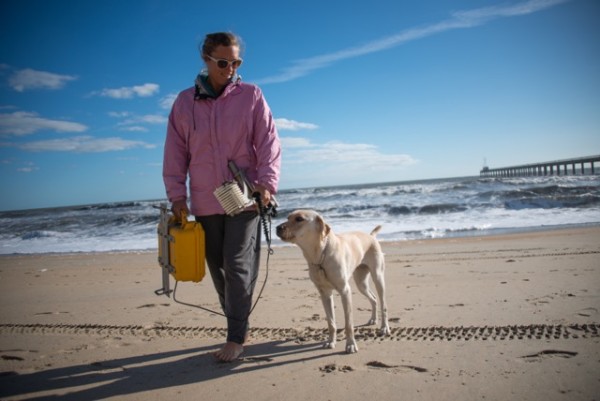 Hugger and I are back in NC, in the field, doing about 9 different pilot studies. Every time I do something new, I learn what I can help with, and what I should let someone else do. Similarly, there are some jobs Hugger helps with, and some times she stays in the office (which is not her cup of tea).

In collaboration with our colleague, YT Lin, we deployed a 16” diameter PVC casing for an acoustic source. The lower 1-2m of the casing needed to be under the watertable, and needed to be 50% holes to allow sound transmission. We learned:

And useful to dictate notes on my phone and provide information about the depths of our groundwater wells as YT and Bill recorded the sounds across the island. YT learned that he can hear the noise transmitted from the source thru the groundwater up to several hundred meters away, which means we can use acoustics to map out the sediment structures under the island.

We deployed some current meters and pressure gages in 2-3 m water depth offshore of the beach, as ground-truth for remotely sensed measurements and for offshore wave and flow conditions during storms. Bill and I rode out of the CRAB with scuba gear, and Levi and Steve lowered and raised pipes and equipment from the “crow’s nest” platform. Bill says the visibility was 0.0 ft at some sites, and maybe up to 6” at others – I have extra practice at working without seeing, so my vision is not an issue in the surf. Hugger stayed home, but was very excited when we returned!

And we collected measurements of dune erosion, shoreline water levels, waves, and groundwater during hurricane Matthew. Hugger helped me get to and from the shore-based instrumentation during deployment, sensor programming, and recovery. I left her in the office when we walked out onto the pier at the peak of the storm to repair the lidar used to measure the dune erosion. The pier wind gage measured a peak gust at 91 mph, and sustained winds were over 63 mph – I was worried that Hugger would get blown over.

Unfortunately, since Matthew, we haven’t been able to walk to work, owing to the flooding. One of the “puddles” between our house and the office was more than 2 ft deep, and Hugger never learned to guide while swimming. But we’ll be walking again soon! Britt Raubenheimer is a senior scientist at WHOI, studying the processes along our coasts, including the effects of storms on water levels, flooding, and erosion, and the effects of waves, tides, and winds on sediment transport, pollution, and groundwater behavior (see the PVLAB website). She lost her vision suddenly in 2003 owing to optic nerve atrophy, and trained with her first Seeing Eye™ dog in May 2005. As an employer, WHOI actively considers how we can assist employees with disabilities to be successful! In this situation, WHOI has provided Britt [and others in a like situation] with salary support to enable her to take time to train with her guides.

WHOI is the world's leading non-profit oceanographic research organization. Our mission is to explore and understand the ocean and to educate scientists, students, decision-makers, and the public.
An Oceanographer’s Guide
Copyright © 2023 All Rights Reserved
Privacy Policy.
Problems or questions about the site, please contact webapp-support@whoi.edu