It’s a Small World After All

As a little kid, I was always fond of the song that went with the Disney attraction, “It’s a Small World After All.” I remember having a 45 rpm record of the song, which I would play over and over. I’m guessing that I saw the attraction at its debut at the 1964 New York World’s Fair, which I went to with my father when I was four or five years old (ok, now you know how old I really am!).  According to Wikipedia, the song was written for the attraction in the wake of the Cuban Missile Crisis “to promote peace and brotherhood.”

So what does this have to do with oceanography? Well, last Saturday we had an event on board the R/V Armstrong that is incredibly rare, and shows what a small world (or ocean) we travel. We crossed ship tracks with another research vessel. And not just any research vessel, but the R/V MSMerian, a ship from Germany carrying two of our OSNAP colleagues and their students and technicians. This was not complete chance … we had been anticipating this rendezvous for days. Both vessels have been doing OSNAP research in this part of the Atlantic Ocean during June. The Merian started before we did, leaving from St. John’s, Newfoundland in late May and starting their work far to the west in the Labrador Sea.  Eventually they made their way into the Irminger Sea to recover the moorings at the sites where we were going to deploy new ones. We shared our daily plans via email, and anticipated that we would meet up at some point last weekend. On the bridge, the crew looked up the Merian’s Automatic Identification System (AIS) number and could track their location even before they were in radar range. This is a system whereby every ship at sea transmits its name and location so that it can be tracked by anyone with an internet connection.

Finally, last Saturday night, the call came down to the lab from the bridge that the Merian was in sight. 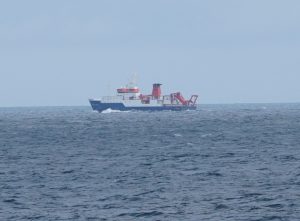 R/V MSMerian photographed from the R/V Armstrong in the Irminger Sea on June 16, 2018, from a distance of about 2 miles. The Merian is 330 feet long and registered in Germany. Photo by Julian Race. 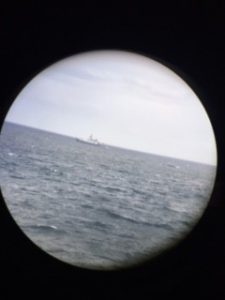 … and at the same time, the R/V Armstrong photographed from the R/V MSMerian through an eye of a pair of binoculars. Photo by Johannes Karstensen.

The Merian crew had just finished recovering one of the moorings and they were sitting on station as we approached. As is customary for ships at sea, we kept a respectably safe distance (about two miles) as we passed each other.

I couldn’t see the Merian myself, but it was almost as exciting just to be on the bridge and know that my colleagues were “just over there!” and to top it off, the mate on Armstrong called the Merian on the VHF radio to say hello. The officer on the Merian picked up right away, and both officers turned the radios over to the scientists. Our chief scientist Alison Macdonald and I had a fun “gam” with Merian‘s chief scientist Johannes Karstensen and Penny Holliday, one from Germany and the other from the U.K. Both have been involved with OSNAP since the beginning (something like 10 years ago when we started planning this complicated international project), so by now they are friends as well as colleagues.  With ship schedules nailed down months or even a year in advance, and no possibility to coordinate cruises from the various OSNAP countries, it is somewhat miraculous that the Armstrong and Merian ended up at the same place at the same time. But then again, maybe not so entirely surprising. This part of the Atlantic Ocean is under extensive scrutiny lately due to its important role in air-sea interaction and climate, and summer is about the only season that sane oceanographers will venture onto its rolling seas. At the beginning of my previous OSNAP cruise in 2014, there were no less than three oceanographic research vessels tied up in Reykjavik getting ready for the summer field season.

Having finished our work today, we are headed back to Reykjavik once more, where we will hopefully see our friends from the Merian again. More OSNAP colleagues, from the U.S., Scotland and the Netherlands,  will be flying into Reykjavik at the same time to take over the Armstrong for more research between Greenland and Scotland. It could be the largest OSNAP reunion outside of the conference meeting room!