DIY (“Do It Yourself”) Moorings

In my last post, I described the main goal of our upcoming research cruise on the R/V Armstrong, that is, to set up four deep-sea moorings in the ocean east of Greenland. 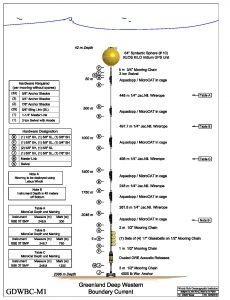 Technical Drawing of a Deep-Sea Mooring

These moorings will have sensors on them to measure the water temperature, salinity, and the speed and direction of the currents. They will “stand watch” for two years, collecting all the data on memory cards inside the sensors. Then we will go back and pick up all the instruments and transfer the data to our computers for analysis. Although the sensors have gotten smaller and more efficient over the years thanks to improvements in the technology, the basic technique of anchoring sensors in the ocean to measure stuff has remained the same for decades. A technical drawing of one of the moorings we will be setting up is shown to the right.

Just as we’re winging our way to Iceland to join the Armstrong on June 2, a group of visually impaired and blind middle and high school students enrolled in the Perkins School Outreach program will be visiting WHOI for a full day of hands-on activities, including three-dimensional models of microscopic organisms, a tactile comic book starring an octopus, getting up close and personal with scientific scuba diving gear, and   a voyage of discovery on Vineyard Sound. Each student will also have a chance to build a model of a deep-sea mooring such as the one shown in the photo below. 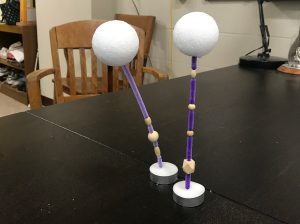 These mooring models complete with an anchor (tea candle), mooring wire (pipe cleaner), sensors (beads to slide on the pipe cleaner) and the flotation that keeps the mooring upright when it is underwater (Styrofoam ball). With pretty simple supplies gathered from a local hobby and crafts store, visually impaired students can get a sense of how a deep-sea mooring is put together and what the most important components are.