A typical cabin on a research vessel looks mostly like a college dorm room—bunk beds, a desk, drawers and lockers for clothes, and that is about it. Most often, the two who share the cabin also share a bathroom (called a head in boat language) with two people from another cabin. Sometimes several cabins share one head. Space is always limited on a research ship, which means the cabins are very small, doorways are narrow and the facilities are usually altogether not accessible to someone in a wheelchair. Well, that is changing…

Technically speaking, research vessels are not required to follow the letter of the law under the Americans with Disabilities Act because they are not classified as official passenger vessels (like a ferry or cruise ship would be). However, the federal agency that operates the fleet of oceanographic research vessels in the United Sates has decided that all new research vessels built here should follow the spirit of the ADA requirements for accommodations. The first new vessel with some ADA accommodations was the R/V Sikuliaq, operated by the University of Alaska since 2014 (see a previous blog post of mine from when I got to tour this vessel).

The R/V Armstrong and several other recently built research vessels also have a number of ADA accommodations, and I am getting the chance to take advantage of them for the first time in my career. The most noticeable change is my bunk—it’s at deck level—in fact, both bunks in my cabin are at deck level. (Photo below) 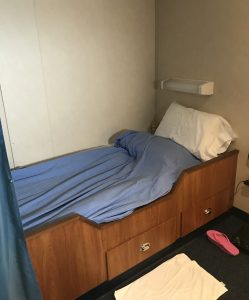 The ADA cabin bunk, a single bed on the floor with no upper bunk.

It’s pretty challenging for any adult to climb into the upper bunk of a standard bunk bed on a rolling ship, much less for someone with limited vision. The cabin is also more spacious, allowing for a wheelchair to maneuver. And the cabin has its own head, with a wide door, a roll-in shower and plenty of handrails. (Photo below) 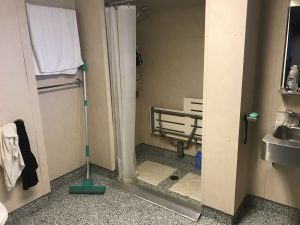 The head, or bathroom, with low-threshold shower access and lots of space

All of these adaptations help me too, even though I’m not in a wheelchair.

Another big new feature is that along the corridors (called passageways in boat speak), there are very few tripping hazards. (Photo below) 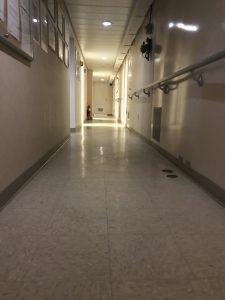 Wide hallways make getting around the ship with a cane much easier. Handrails help a lot, too.

In older ships, there are very high thresholds between different rooms or compartments that are really sort of hazardous for everyone, but especially if you are navigating with a cane like I am. With newer designs, these thresholds were almost all eliminated.

Finally, the stairways (called ladders on a ship, even though they are more like stairs than a vertical ladder) have continuous handrails from one flight to the next, making it possible to keep one hand on the railing all the way up and down from the lowest to highest deck. This helps me feel much more secure since I always have my cane in one hand.

Although these improvements may seem like small changes, they can make a big difference to someone with a disability working on a research vessel. It requires a lot of concentration and hard work to do science at sea, and if someone has to focus a fair fraction of their energy just on navigating the space, that gives them less energy for their work. There are still challenges. For example, accessing all the read-outs from various instruments on the ship is still sometimes impossible for someone with limited vision. But even this situation is improving. Many of the instruments put out a digital signal that can be displayed on a web site. Someone like me, who uses a screen reader to access the content on a computer screen can ‘hear’ the read-outs in real-time. Other visual challenges on the ship are the same throughout the work and social lives of scientists, but I’m optimistic that progress will continue until everything is equally accessible to sighted and blind alike. 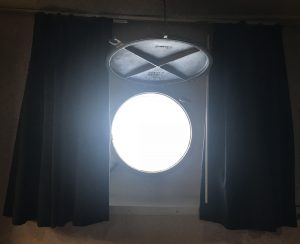 A porthole gives light and a view, but can be secured in very rough weather.