A Sentinel for Observing the Ocean

This research cruise is dedicated to four different projects, of which ours is just one. The primary activity is the annual replacement of the Ocean Observatories Initiative (OOI) moorings in the Irminger Sea, which is located east of Greenland. The Irminger Sea Array is part of the much larger OOI project with long-term observing sites at various locations in the Atlantic and Pacific, and it is funded by the U.S. National Science Foundation. I’m not directly involved in this effort, but I find it fascinating.

The centerpiece of this mooring array is the surface mooring which includes a huge surface buoy outfitted with sensors to measure all aspects of the weather at this site, including air temperature, wind speed and direction, humidity, precipitation and solar radiation, among other variables. Throughout the mooring array on the surface mooring, profiler mooring, and nearby ‘flanking’ moorings are sensors that simultaneously measure ocean temperature, salinity, currents, dissolved oxygen content, as well as the amount of living and dead microscopic plants and animals (more about why that matters in a future blog post) from top to bottom. Much of the data being collected will be transmitted back to shore in real time by both underwater and satellite communication systems. The rest will be downloaded when sensors are retrieved on these annual cruises and then posted online.

This combination of observations is needed to better understand how the ocean affects the atmosphere, and vice versa.   The ocean and atmosphere are both important players in Earth’s climate system, and we need to know how they interact to fully understand how our climate will evolve in the future as a result of both natural processes and human activity like greenhouse gas emissions.

So why here in the Irminger Sea? Well, this location turns out to be one where the interplay between the ocean and atmosphere is particularly intense. This is the northern North Atlantic after all, well-known for severe weather, cold water and huge waves. These conditions have made it almost impossible to make these kinds of measurements from ships, especially in winter, when this area is pounded by storm after storm, with near-hurricane force winds and freezing temperatures. 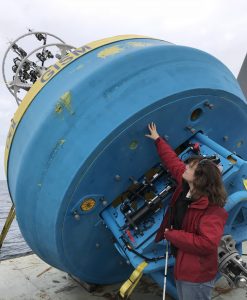 Amy under the base of the OOI surface buoy (SUMO) on the back deck of the RV Armstrong.

Starting today, there will be a new sentinel keeping constant watch over the ocean and atmosphere here in this inhospitable environment. We are deploying the surface mooring, also known as SUMO, to replace the mooring that was deployed last year but which mysteriously disappeared in October.  That story will be the subject of a future blog post. But for now, all attention is on the challenging deployment of the giant surface buoy that has been sitting like a beached whale on the back deck since we left Iceland.

It is a technological marvel, designed to make the most delicate measurements in a roaring gale, and survive whatever the weather brings for an entire year. 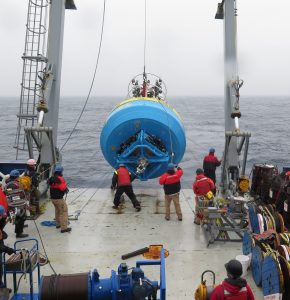 The surface buoy of the OOI surface mooring being deployed, with deck crew handling five tag lines to keep control as the buoy is slowly lowered into the water.

Conditions for the deployment are almost all we could hope for—winds and waves are low, and it’s not snowing or raining! It’s a chilly 40 degrees F, with occasional drizzle. The scientists, engineers and crew members responsible for getting the buoy into the water are decked out in full foul weather gear, hard hats,  steel-toed boots and of course PFDs (personal floatation device, better known as a life jacket). I can feel the tension in the lab and on deck, but everyone keeps an even keel as small issues come up and are quickly resolved.

I’m impressed with their professionalism and experience. I feel lucky that these same men and women will be helping out when it’s time to get our moorings in the water, which is scheduled to start around June 15. As we say often on board, “Stand by!”