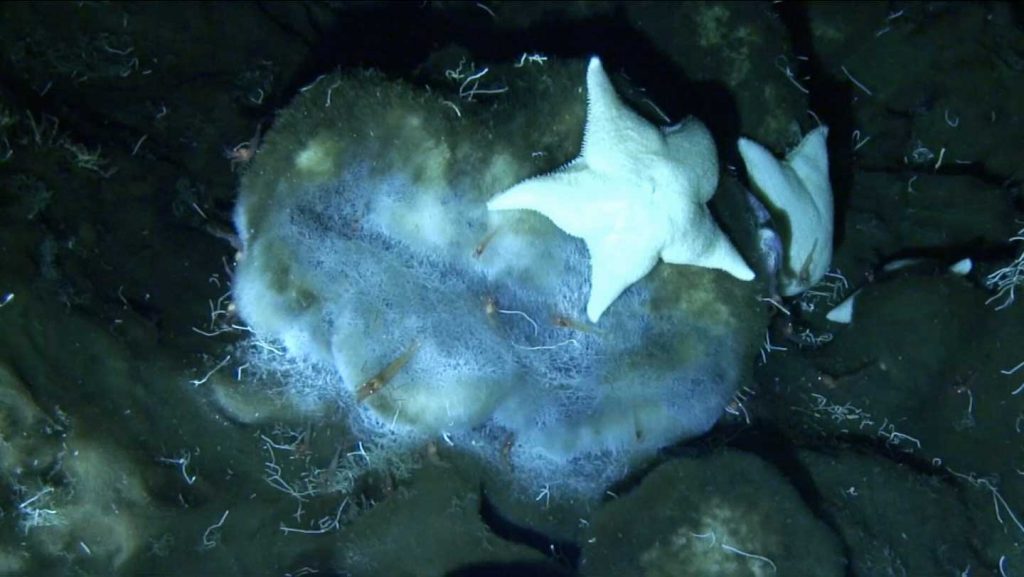 Festering sponges. This sponge has seen better days, but as it rots and becomes covered in a white microbial mat, it becomes quite the “in” new place to dine out for shrimp and starfish. Indeed, this venue is so hot that other creatures are literally fighting to get a place at a table!

Thursday, October 13 – It’s two days since my last post and we are making excellent progress toward Spitzbergen. We are due to arrive at the ice buoy station tomorrow afternoon and after that it should only be another 24 hours until we are free of the ice. I’m not sure we will enjoy being in waves in the Norwegian Greenland Sea in late October, but at least it will be a change!

In the meantime, I have been taking advantage of the relatively flat (if a little bumpy when we crash into thick ice at 7 knots) conditions to work up all of the data from the past few weeks—or at least some of the most compelling parts that I am most interested in. All day Wednesday, I went back through the OFOS dives over the vent site to make sure I had put everything we saw in the chemical sensors together with everything we could see on the seafloor. We still have all the videos to review but for now, I have been looking back through the high-resolution still images and sensor data.

Most interesting of all was the chemical sensor data from the very last OFOS deployment. Although we got swept off course for the second half of the dive, what we did, for starters, was pass right over the summit of what will always be to me “Mt. Brexit” (on account of the crushing disappointment it caused us). When I checked the chemical sensor data yesterday, as the last part of making sure I had dotted every “i” and crossed every “t,” I discovered we must have passed right by a second vent source—albeit, a very diffuse source—right up at the summit.

Early in the cruise, we thought there might be two sources, but had become fixated on finding the first and largest source. This was a timely reminder that we had, perhaps, only scratched the surface of what is going on back there.

In similar vein, today I have been re-viewing every minute of our footage from NUI ROV Dive 16 to the southern summit of Karasik seamount. We did a great job of imaging and collecting biological samples, but something that continued to bug me was why we would rarely see evidence in the AUV dives of weak, but very credible, chemical anomalies of the kind associated with venting and cold seeps. I think I may have worked out why.

In addition to being covered in giant sponges 0.5 to 1 meter (1.6 to 3.3 feet) in diameter, there was also an underbedding of “sponge slime” all over the mound that clearly seemed to be what was left behind from past generations of sponges. What we saw in our dive was that every few minutes or so we passed over a bright white sponge, often with a cluster of starfish associated with them. Being able to stop with the ROV and study one of these sites in detail has provided us a great new insight. It seems that the sponges, as they die, rot away and become host to films of bacteria that, just as fast as they eat away at the decaying sponge, are themselves preyed upon by other organisms. In the video we collected, we saw starfish all over a rotting sponge, but when we zoomed in we also saw shrimp fighting each other for space on top of the sponge to eat the microbial mat that had formed.

I suspect it’s quite possible, therefore, that the festering sponges are responsible for the chemical signals in the water column that we have seen—and perhaps that is what the other animals can detect in the ocean, as well, telling them where they can find a free lunch. It’s not quite the “oases for life” I was thinking of when I first proposed we bring NUI here, but it’s an interesting discovery, nevertheless.

And Beate confirms that what we brought up from that site for her research was, indeed, as stinky a sample as it has ever been her “pleasure” to possess.

Back tomorrow with an update on our latest—and last—ice station.