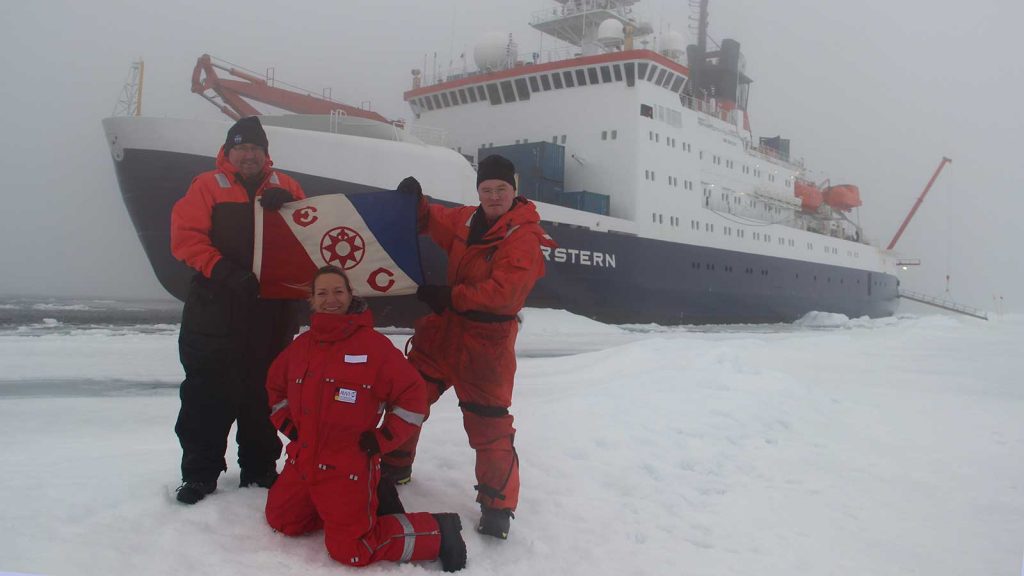 Tuesday, October 18 – It appears everything we can do is done. I had hoped that we would get to see the Aurora Borealis as we steamed south past Spitzbergen, but instead we have had cloudy skies the past two nights and now we are already almost as far south as northern Norway, so I am not holding out much hope.

Since the weekend, our primary activities have been to make sure all our data is backed up, the cruise report written, and our equipment packed away. On a normal cruise we would have planned to keep working right up until the last minute in our laboratories, but because this is the last cruise of the summer Arctic season aboard Polarstern, we have been instructed to have all of our packing completed today and all our labs cleaned and emptied by the end of Wednesday so that they are ready for inspection by the chief officer first thing Thursday. Exactly what we are supposed to do for the rest of Thursday and all day Friday and Saturday isn’t exactly clear: Try to work from laptops in our cabins and not make the ship look untidy? Anyway, it seems like the safe option is to close the blog out today so we can pack everything away.

Thanks for reading along for as long as you did and a special mention to Nell Hermann’s class at Blue Hill Consolidated School in Maine and to Carolyn Shield’s class at Clarke Middle School in Lexington, Mass., for sending along such stimulating questions as the cruise progressed.

Our research here at sea has been sponsored, on the U.S. side, by NASA’s PSTAR program (Planetary Science and Technology Analog Research) as, we hope, just the starting point for future exploration of ice-covered oceans: on Earth and beyond! Special thanks are due to our Chief Scientist, Antje, who first challenged me as far back as the spring of 2009 that she would get the ship time to go explore the Arctic seafloor if I could get WHOI to build a suitable robot. That was quite the challenge! 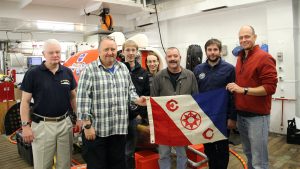 My Heroes. The people who made NUI work, sporting Flag 80 of the Explorers Club in front of NUI aboard Polarstern following NUI Dive 16 to the Karasik Seamount in the Arctic Ocean. From left to right: Andrew Branch, Louis Whitcomb, Casey Machado, John Bailey, Stefano Suman and Mike Jakuba. (photo by Chris German, Woods Hole Oceanographic Institution)

On the plume-hunting side, it has been great to have my U.S. colleagues Kevin and Jill as shipmates every step of the way for this expedition, and I found it especially rewarding to with Maren and Janna from Bremen on the CTD watches, tracking down and sampling those hydrothermal plumes to make sure that Jill and Kevin (and Gunter and all the others) had interesting samples to analyze. The OFOS surveys, hunting down the exact location for the vent-site with Autun, Simon, Laura, Harald and Paulina, may have been ultimately unsuccessful but were always a joy to be a part of. Most of all, I would like to pay special thanks to the NUI engineering team: Mike, Andrew, Casey, John, Louis, and Stefano, without whom none of our achievements would have been possible.

This cruise was adopted by the Explorers Club as one of their prestigious Flag Expeditions and I don’t think we have let them down. While actually getting to and from the Arctic may no longer be such a challenge as it was when Flag 80 was young (it has been joining Explorers Club expeditions since a 1938 expedition to explore the mountains of Alaska), it is nice to know that there are still new places on this planet to explore. We didn’t have to go quite as far north as we just did to find completely unexplored ocean environments, but with the completion of this expedition—our first dives to the seafloor beneath 100 percent ice cover—it is good to know that we now have the technology that proves we can come back and do more.

But before I turn my thoughts to any further exploration, it is high time I got my priorities straight and started trying to redeem myself as a human and, more specifically, a husband. Next Sunday, when I should be home celebrating my wife’s birthday (and it is a big one—she tells me she is going to be 16 again) I will, instead, be unloading NUI gear in a shipyard in Bremerhaven, Germany. So, if you have enjoyed reading this blog, then I would like to ask a favor in return: Please step outside, wherever you live in the world, at around 9:00 a.m. on Sunday, October 23, and shout as loud as you can, “Happy Birthday, Romey!”